J.K. Rowling calls out writer over Jeremy Corbyn and anti-Semitism: ‘What other minority would you speak to this way?’ 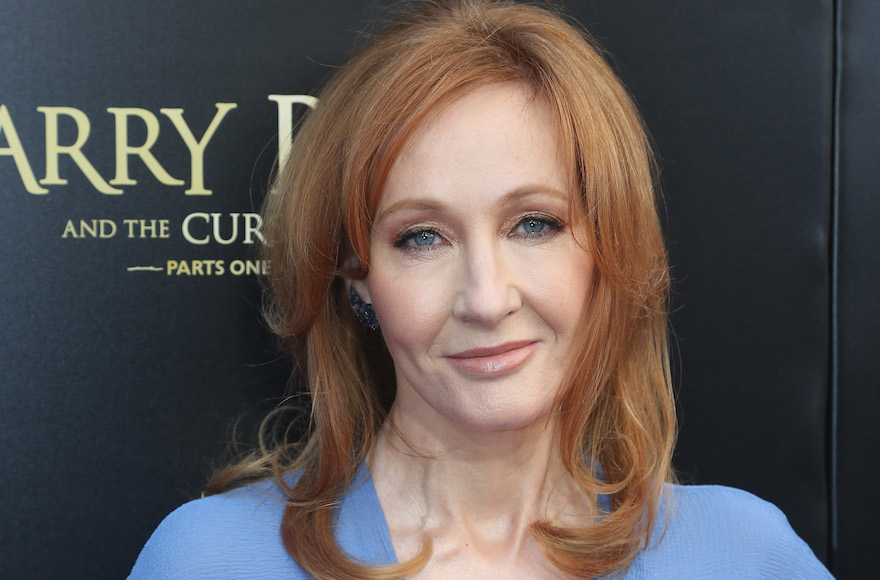 J.K. Rowling at the opening night of the Broadway show "Harry Potter and The Cursed Child" at The Lyric Theatre in New York City, April 22, 2018. (Bruce Glikas/Bruce Glikas/FilmMagic)
Advertisement

(JTA) — J.K. Rowling went head to head with a fellow British writer on Twitter over his criticism of Jewish complaints about anti-Semitism in the Labour Party.

Simon Maginn, who has written five thrillers under his own name and satirical comedies under the name Simon Nolan, on Sunday in a tweet called Jewish outrage over Labour leader Jeremy Corbyn’s 2013 comments indicating that “Zionists” do not understand British culture “patently synthetic outrage,” and called on a Jewish tweeter to “Explain your deep and wounding sense of injury.”

Rowling, who is not Jewish, tweeted in response: “How dare you tell a Jew that their outrage is ‘patently synthetic’? How dare you demand that they lay bare their pain and fear on demand, for your personal evaluation? What other minority would you speak to this way?”

How dare you tell a Jew that their outrage is 'patently synthetic'? How dare you demand that they lay bare their pain and fear on demand, for your personal evaluation? What other minority would you speak to this way?

Maginn then called on Rowling to explain, noting that Corbyn has said that his comments did not refer to Jews but was “a rather complicated joke about the Palestinian Ambassador’s fluency in English.”

The opening salvos set up a back and forth that lasted throughout Sunday. Rowling tweeted several quotes from Jean-Paul Sartre’s “Anti-Semite and Jew” — a famous essay on anti-Semitism by the philosopher — and lambasted him for demanding that a British Jew explain how he feels under anti-Semitic attack “when there are literally hundreds of accounts currently online explaining how British Jews currently feel?”

'it is their adversary who is obliged to use words responsibly, since he believes in words. The anti‐Semites have the right to play.'

Who are you calling an antisemite? Care to make it absolutely explicit rather than fancy-pantsing around it? Is it me? Am I an antisemite, Ms Rowling? Come on, let's do this. Spit it out.

Maginn accused Rowling of “libel” for publicly calling him an anti-Semite in one of her tweets, but tweeted that “I’m not going to mount a legal action against you because I haven’t got any money and you’ve got a lot, but false + defamatory = libellous. What a class act you are. What a nasty vicious little bully. Blocked.”

BTW, calling me an antisemite is libel. I'm not going to mount a legal action against you because I haven't got any money and you've got a lot, but false + defamatory = libellous. What a class act you are. What a nasty vicious little bully. Blocked.

Dan Hodges is a columnist for the Daily Mail who has accused Corbyn supporters of overt anti-Semitism. Pollard is the editor of London’s Jewish Chronicle newspaper, and Baddiel is a British comedian and activist who campaigns against anti-Semitism in British soccer matches.

Maginn called on Rowling to apologize for “a sickening personal accusation against a complete stranger who disagrees with you politically,” also tweeting that “your followers surely deserve better than this kind of behaviour from you. So do I. I deserve an apology.”

Rowling, who has 14.4 million followers on Twitter, did not respond.

Maginn has tweeted against Jews in the past. In July, in response to the Labour Party rejecting the complete international definition of anti-Semitism, he wrote: “Astounding isn’t it, that a group which claims to be silenced, oppressed, powerless manages to keep the story running day after day, week after week, month after month, in every Tory paper and on the Tory BBC. Must be terrible to be so oppressed, so silenced.”

It is not the first time that Rowling has debated anti-Semitism on Twitter. In April, she posted a screen grab of a non-Jew attempting to explain what Judaism is — “Judaism is a religion not a race” — and explained why this is hardly relevant to defining anti-Jewish bias.

She tweeted: “Most UK Jews in my timeline are currently having to field this kind of crap, so perhaps some of us non-Jews should start shouldering the burden,” she said. “Antisemites think this is a clever argument, so tell us, do: were atheist Jews exempted from wearing the yellow star? #antisemitism.”

She also responded when someone argued that Arabs can’t be anti-Semitic because they are Semites. “The ‘Arabs are semitic too’ hot takes have arrived,” she tweeted.