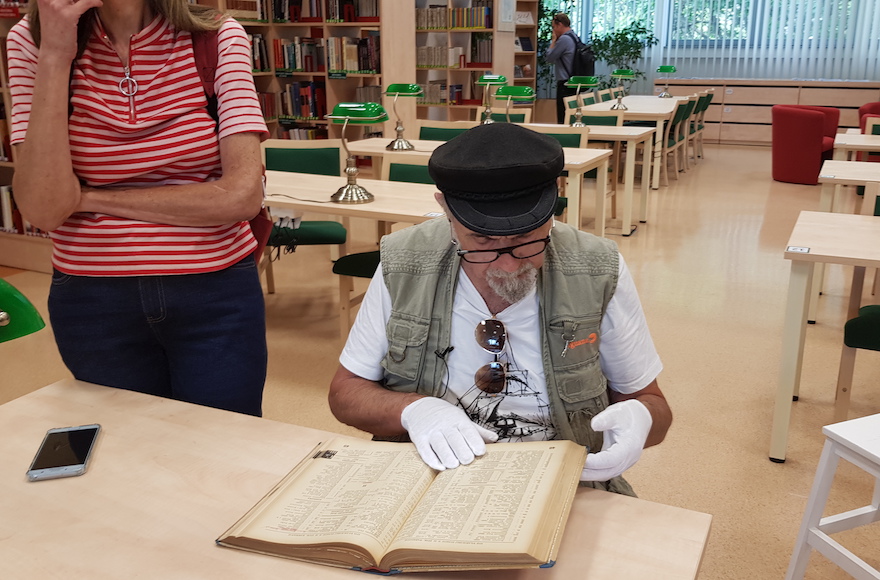 Yoram Sztykgold examining the unpublished registry from 1939 that helped him locate his family's assets, at a Warsaw military library in Warsaw Poland, Sept. 4, 2018. (Cnaan Liphshiz)
Advertisement

WARSAW (JTA) — In the small park behind the only synagogue in this city to have survived World War II, Yoram Sztykgold looks around with a perplexed expression.

An 82-year-old retired architect, Sztykgold immigrated to Israel after surviving the Holocaust in Poland. He tries in vain to recognize something from what used to be his childhood home.

Sztykgold’s unfamiliarity with the part of Grzybowska Street where he spent his earliest years is not due to any memory loss. Like most of Warsaw, his parents’ apartment building was completely bombed out during the war and leveled, along with the rest of the street. His former home is now a placid park that is a favorite hangout for mothers pushing baby carriages and pensioners his age.

The dramatic changes in Warsaw’s landscape have bedeviled efforts for decades to obtain restitution for privately owned properties like Sztykgold’s childhood home, making it difficult for survivors like him to identify assets that may have belonged to their families.

But for many restitution claimants in the capital, identifying assets will become easier thanks to a recent breakthrough with an unlikely source: the establishment of a first-of-its-kind searchable database. Users need only type in the name of their family to obtain a complete overview of all the assets they may claim under a new restitution drive in Warsaw.

It’s a high-tech tool only made possible thanks to the recent discovery of an unpublished phone book from 1939.

The World Jewish Restitution Organization, or WJRO, set up the database in December 2016. It allowed a relative of Sztykgold to get the first definitive list of the assets the family had in Warsaw before the war, when they headed a real-estate empire.

The database allows users to check whether their family owned any of the 2,613 properties that the City of Warsaw said that year it would reopen for restitution claims.

Especially in Sztykgold’s case, the database had “a huge role,” he said, because the only adult from his family who survived the genocide was his mother, who “had only partial knowledge of what her family owned.”

“Bits and pieces, really,” Sztykgold told JTA on Monday during a restitution-related visit to his place of birth.

During the visit, Sztykgold also got a rare chance to examine the key that led to the groundbreaking database: a yellowing proofing copy of a phone book of sorts from 1939. It was never published because the directory was being prepared when the Germans invaded Poland. 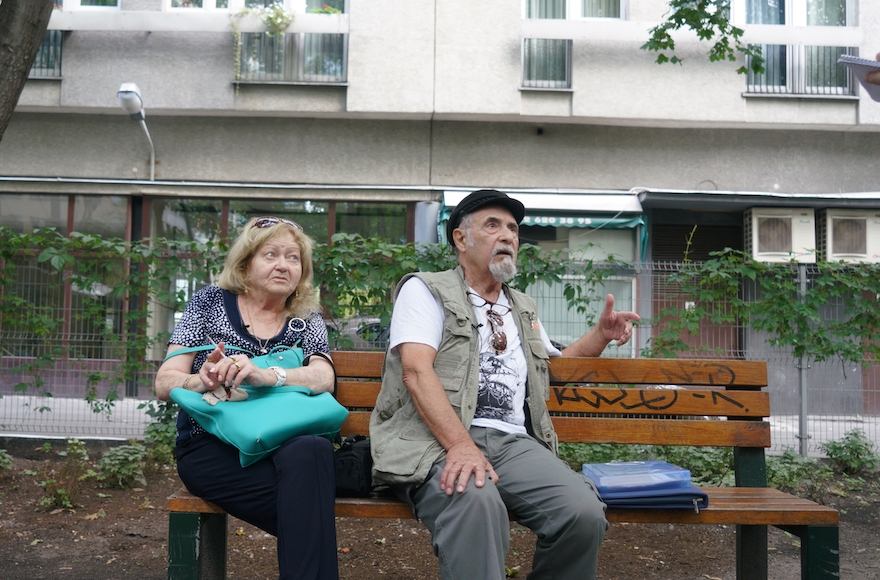 Sztykgold and wife Liora rest in a park that was built on the site of what used to be his childhood home in Warsaw, Sept. 5, 2018. (Cnaan Liphshiz)

Crucially, the phone book, or registry, contained information that allowed genealogist Logan Kleinwaks of Washington, D.C., to find the names of the owners of thousands of assets, including approximately half of those 2,613 properties that Warsaw said it would reopen to claims.

Poland, where 3.3 million Jews lived before the Holocaust, is the only major country in Europe that has not passed national legislation for the restitution of property unjustly seized from private owners by the Nazis or nationalized by the communist regime, according to the WJRO. Instead of passing legislation, Polish authorities and courts handle restitution claims on a per-case basis.

Dozens of such cases have been resolved in recent years. Several Polish property attorneys told JTA that there is no way of knowing how many of the claims are by Jews.

As it carries out its controversial new restitution drive announced in 2016, Warsaw periodically releases a few dozen addresses of properties from its list that had been claimed during communism but whose status has never been resolved. The city does not release owners’ names, although it presumably has at least some of them from stalled restitution claims filed for each of the 2,613 assets. Critics of this practice say it deprives claimants of crucial information necessary to gain compensation. Advocates say it is designed to minimize fraud.

Once a property is reopened for restitution, claimants have six months to file a second claim. It is an unreasonably short period of time, according to WJRO. But for people like Sztykgold, who don’t even know which addresses their families used to own, the entire 2016 process is irrelevant.

Or, at least, it used to be until Kleinwaks “matched addresses announced in 2016 with the names of the owners” who are indicated in the 1939 registry, he said.

Today, the copy is kept in the vaults of the Central Military Library, which in 2014 bought it for about $3,000 from a book collector at an auction. The library then scanned the book and published the scans online. Kleinwaks, who had heard about the auction and was eagerly awaiting access to the book’s content, then used software he developed to build an owners’ database from the phone book, matching it with the 2,613 addresses.

So far, the City of Warsaw has reopened only about 300 of the restitution claims from the list of 2,613, and not one of the claimants has received compensation. Kleinwaks said he does not know how many people are using his database to mount claims. He has reached out personally to more than a dozen families whose names he found, he said, and some of them have subsequently initiated restitution work.

None of the Sztykgold family’s assets — there are over a dozen of them – have been reopened for restitution. But the Sztykgold family is already doing the footwork — locating birth certificates, building a family tree, proving they are the only heirs and many other bureaucratic chores — so that when their assets are reopened, they would have a hope of making the six-month deadline.

Gideon Taylor, WJRO’s chair of operations, said it was “a very positive step” by Polish authorities to purchase and make available online the 1939 registry.

“But Poland has to now follow through and make that information actionable for heirs, instead of introducing procedure that make it more difficult to reclaim properties,” he said.

Unlike her husband, Liora Sztykgold, 77, can’t even use the WJRO database to find out whether her parents had any assets that are being reopened for restitution. An orphan who was left in the care of a Catholic convent, she knows neither her birth name nor her date of birth.

“It’s not about money,” said Liora, who has two children with Yoram. “Of course, we’d like to leave more to the grandchildren. It’s about achieving a measure of justice.”

In Warsaw, attempts to achieve justice on restitution are complicated, messy and feature many non-Jewish claimants.

About half of the 2,613 assets on the list being reopened were probably owned by non-Jewish Poles, according to Kleinwaks. Wojciech Danko sits on the bed while his mother, Krystyna, 101, rests in their Warsaw apartment, Sept. 6, 2018. (Cnaan Liphshiz)

But “there is a general unwillingness to touch the issue,” according to Konstanty Gebert, a Jewish journalist for the Gazeta Wyborcza daily. This is largely because of corruption scandals plaguing it, he said,  but additionally, “Many Poles feel the entire nation suffered under Nazism and communism, and that it’s wrong for only a few to get restitution.”

Then there are cases like that of Krystyna Danko, a non-Jewish woman who risked her life to save Jews during the Holocaust. She was forced out of her home at the age of 100 after the building where she had been living for decades on the ground floor was returned in 2016 to restitution claimants from Paris. (The claimant, Emilia Radziun, who owns a supermarket in the French capital, has told the Polish media that she is not Jewish. She did not reply to JTA’s attempts to reach her.)

Now Danko lives in a public housing building on the sixth floor, where her wheelchair barely fits the rickety elevator. Her son, Wojciech, says that his mother, who is nearly 102, went blind during the weeks of the move from the stress involved.

“What happened to my mother wasn’t just, but I understand the Jewish perspective of seeking justice through restitution,” he said. “I think we need legislation and a compromise because the way this is going isn’t good for too many people.”