How a rabbi got caught up in a Belgian spy scandal 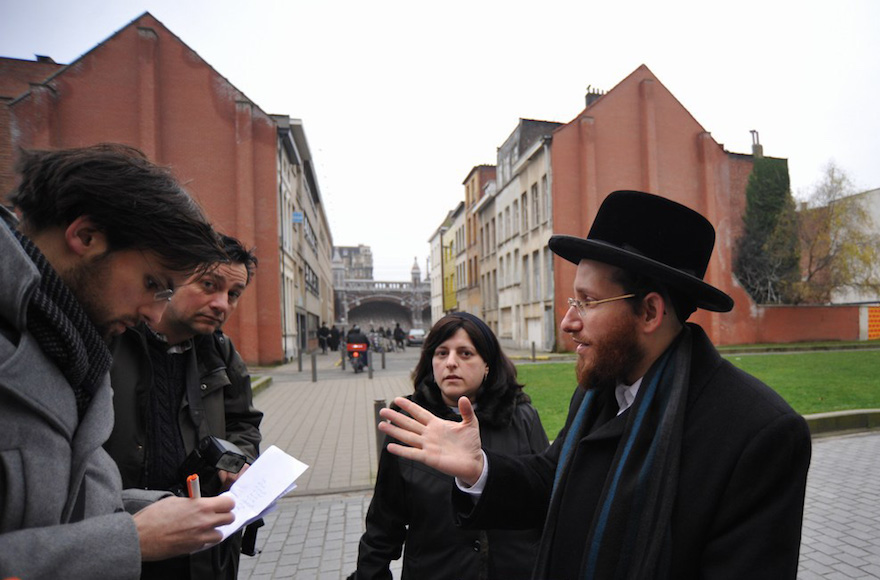 (JTA) — Moshe Aryeh Friedman may be mild-mannered, but the Antwerp rabbi certainly has a knack for publicity.

An anti-Zionist activist from New York, Friedman, 47, has been accused — falsely, he has said — of denying the Holocaust during a 2006 conference organized by then-Iranian President Mahmoud Ahmadinejad in Tehran.

He has since repeatedly riled the Jewish community of the Belgian city where he has lived with his family since 2011.

In 2013, Friedman got a judge to force a Jewish school for girls to admit two of his boys – a blow directed at a congregation that treats him like a pariah.

This year he went after another communal soft spot, telling the media that Orthodox Judaism does allow the stunning of animals before they are slaughtered (despite a rabbinical near consensus to the contrary).

But even Friedman outdid himself this summer when he landed himself and his family in the middle of an international scandal involving suspected espionage by a young Moroccan woman whom the Belgian security service recommended deporting, saying she threatens national security.

The relationship between Friedman and 32-year-old Kaoutar Fal, who left Belgium on July 23 amid suspicions that she is a Moroccan spy, began several years ago when they met at various conferences about “achieving peace,” he told JTA.

Friedman and his wife, Lea Rosenzweig, have been at the forefront of an effort to clear the name of Fal, who describes herself as an entrepreneur, women’s rights activist and journalist, and has denied gathering intelligence for any country, including Morocco.

The couple’s involvement began on July 11, when Rosenzweig called police to report that Fal had been abducted in front of the European Parliament in Brussels.

In reality, Fal had been taken for interrogation by security services, according to VRT and the Joods Actueel Jewish newspaper, though Friedman insists she was abducted by unidentified “mobsters.” Whoever they were, the men who apprehended Fal whisked her away into a van with civilian license plates in broad daylight in front of the European Parliament, according to VRT.

During that week, police picked up Fal a number of times in connection with her three-year visa, which had been issued in 2016 but revoked suddenly this year. The Belgian State Security Service flagged Fal as “a danger to our national security,” VRT said. Later, the same service told a court that Fal is “actively involved in intelligence operations for Morocco,” leading to her departure from Belgium after her release without a staying permit.

Friedman has lodged a complaint with police over what he calls Fal’s abduction in Brussels. He told JTA that Fal, whom Friedman has visited in Morocco several times since 2017, including with some of his eight children, is “not and has never been a spy. These are all false allegations.”

He similarly dismissed as “nonsense” a claim, appearing on a small news site for Moroccan Berbers in Belgium, that Fal is his lover.

But what may have remained an unlikely friendship between two colorful figures could still pose a security risk for Belgium, according to an expose published Thursday by Joods Actueel, which has taken a highly critical line in covering Friedman’s actions vis-à-vis the Jewish community.

That’s because Friedman’s 23-year-old daughter, Rezi, is running for office in the Oct. 14 municipal elections on the ticket of the party of Kris Peeters – the current deputy prime minister of Belgium. Peeters and Rezi Friedman posed together for a campaign poster on display in Antwerp wishing Jews Shanah Tovah, a happy Jewish New Year.

And that’s a potential issue because Rezi Freidman lives at home with her parents at the same address that Fal at one point gave authorities as her correspondence address in Antwerp, Joods Actueel suggested. The rabbi said that his daughter “didn’t have anything to do” with Fal, who may have given authorities his address, he said, only so he might hold her mail for her during her court case over extending her visa.

On Tuesday, Fal wrote under a campaign poster on Rezi Friedman’s Facebook account: “You’re the best, I know you’re going to be successful in anything you do.” The two women posed together for pictures on several occasions.

According to Joods Actueel editor-in-chief Michael Freilich, this means that “we have to ask ourselves questions about” a suspected spy’s ties and access to politicians during the campaign and “whether this is a security issue.”

Rezi Friedman did not respond to JTA’s request for a comment on Freilich’s assertions.

Freilich is not the only one with an uneasy feeling about Fal’s ties to the Friedmans.

“Rezi Friedman is now surrounded by a few important politicians,” Christophe Busch, a terrorism expert and criminologist who is the director of the Kazerne Dossin state Holocaust museum near Antwerp, told Joods Actueel.

Even if she herself never does anything to endanger national security, “There is the appearance that that’s possible,” he said. “And that’s a big problem for her party because appearance is everything in politics.”