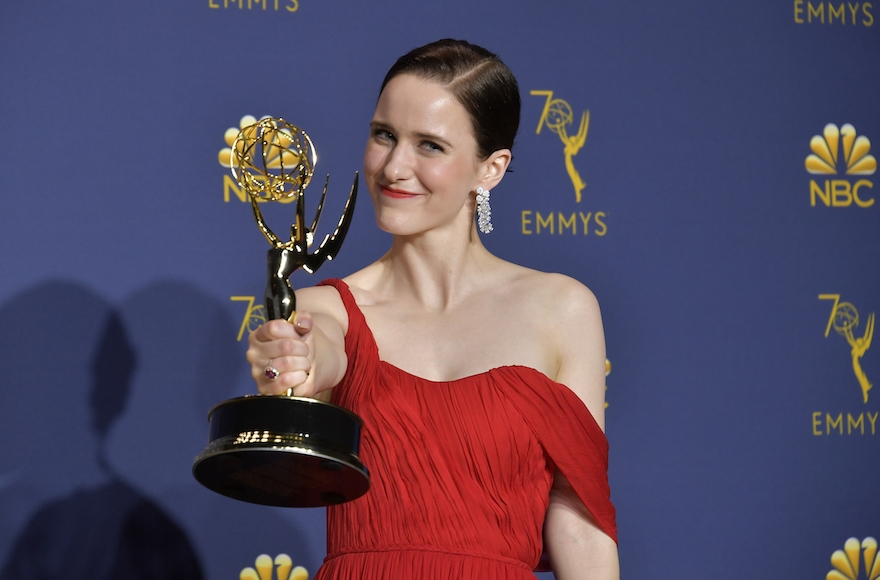 (JTA) — It was quite a Jewish night at the 70th Emmy Awards. While co-host Michael Che joked that most of the first winners, despite being white, did not thank Jesus, the explanation may have been that almost all of them were Jewish.

“The Marvelous Mrs. Maisel,” the Amazon show about a Jewish housewife turned stand-up comedian, won nearly every award for which it was nominated, including best comedy, best writing for a comedy series, best directing for a comedy series and best actress in a comedy. The show gobbled up eight awards in total.

Amy Sherman-Palladino, the show’s creator, won two awards, for writing and directing. She dedicated the writing prize to her father, who died in 2012, saying the show was based on him. Don Sherman was a comedian.

“My father inspired this, really, so I had to turn a 6-foot-2 Bronx Jew into Rachel Brosnahan. That’s Hollywood!” Sherman-Palladino, also the creator of the iconic show “The Gilmore Girls,” said in her acceptance speech.

Rachel Brosnahan, who is not Jewish, won an Emmy for her role as the titular Mrs. Maisel. She urged viewers to participate in the political process ahead of November’s midterm elections.

“One of the things that I love about this show is that it’s about a woman who’s finding her voice anew,” she told the crowd. “One of the most important ways that we can find and use our voice is to vote.”

Alex Borstein, the “Mad TV” alum who plays Suzie Myerson, Mrs. Maisel’s gruff manager, won the second award of the evening. Her mother was a Holocaust survivor from Hungary.

Here are the other Jewish highlights from TV’s biggest night:

* The opening monologue started with jokes about Roseanne, who was fired from the reboot of her eponymous sitcom following a racist tweet.

“Roseanne was canceled by herself, and then picked up by white nationalists,” co-host Colin Jost joked.

Che retorted: “I heard Roseanne’s actually moving to Israel. How messed up is your life when you have to move to the Middle East just to get peace of mind?”

* Maya Rudolph, who recently opened up about her Jewish father, also starred in the show as a clueless Emmy expert with Fred Armisen, adding some odd humor to the wacky night. Rudolph and Armisen star in a new Amazon show titled “Forever.”

* Jewish actor Henry Winkler, who has become a ubiquitous character actor since his days as “The Fonz” in the popular 1970s and ’80s sitcom “Happy Days,” won his first Emmy — for supporting actor on the HBO show “Barry.” It was a sweet moment for him.

Winkler’s German Jewish parents immigrated to the U.S. in 1939 and helped found Congregation Habonim, a Conservative German synagogue in Manhattan. Winkler was married there to Stacey Furstman.

* Another sweet moment came later, when the Jewish director of the Academy Awards show, Glenn Weiss turned his Emmy acceptance speech into a wedding proposal. Weiss, who won best directing for a variety special, first honored his mother, who died two weeks before the awards. He then proposed to girlfriend Jan Svendsen, who he called “his sunshine,” with his mother’s ring.

While accepting the Emmy for outstanding directing for a variety special, #Oscars director Glenn Weiss proposes to his girlfriend… and she says yes. #Emmys pic.twitter.com/FcyUipMlx1

* The in memoriam segment honored Jewish legends Monty Hall and Neil Simon, among others.

* Joe Weisberg, a former CIA officer, won for his writing for the FX drama “The Americans.”

* D.B. Weiss and David Benioff, the Jewish showrunners of “Game of Thrones,” were the last winners of the night, taking home the trophy for best drama series.