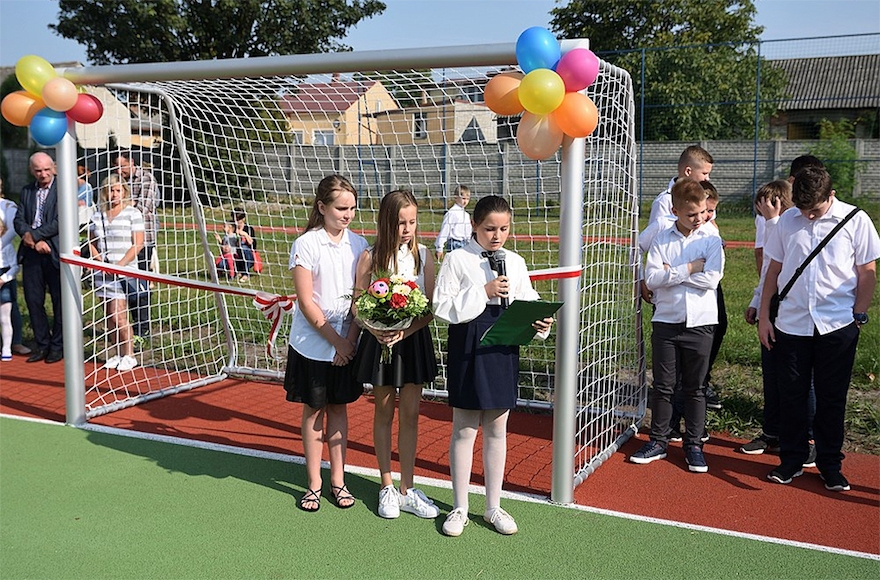 Polish school children at a ribbon cutting ceremony at the field in Klimontow, Poland, Sept. 6, 2018. (Courtesy of the Municiplaity of Klimontow)
Advertisement

The complex, comprising a basketball and soccer court, was inaugurated on Sept. 6 at a ribbon- cutting ceremony in Klimontow, a town located 20 miles northeast of Krakow, according to the municipality’s website. It said the project has received more than $90,000 in government funding.

But according to the Shem Olam Holocaust museum near Hadera in Israel, the complex is located atop the former Jewish cemetery fo the town, which before the Holocaust had thousands of Jewish residents.

“This is deeply offensive to the Jewish People,” the museum’s director, Rabbi Avraham Kriger, wrote to the municipality last week, the news site Kipa reported.

Meir Bulka, an Israeli Holocaust commemoration activist and founder of the J-Nerations organization, told JTA that he believes the municipality was aware of the cemetery’s location when it built the complex on it. “They laid down piping there. There is no doubt they encountered graves,” he said Friday.

The municipality of Klimontow did not reply to telephone calls and an email from JTA requesting their reaction to the claims.

Yaakov Haguel, acting director of the World Zionist Organization, said he holds the Polish government responsible for the construction in Klimontow, which he called “a kick delivered to Polish Jewry Poland.”

In a statement, he noted the passing in January in Warsaw of a law prohibiting blaming the Polish nation for Nazi crimes, calling it “an attempt to blur history, compounded by insensitivity to Polish Jews” in Klimontow. “The Polish government must respect Jews as it does any other citizen. Such events must not be allowed to recur in Poland and beyond,” he added.