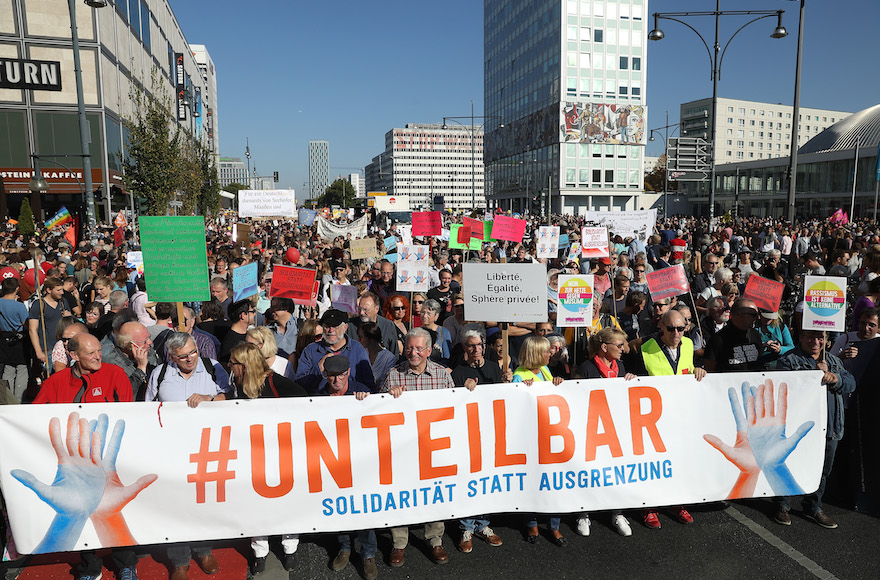 Protesters gather to participate in the Unteilbar ("indivisable") march against racism, exclusion and exploitation and for an open society on October 13, 2018 in Berlin, Germany. Organizers of the march decry the growing divisions in European society that they claim are being fueled by policies that accentuate the gap between rich and poor, that prioritize security over human rights and that promote nationalism over inclusion.
Advertisement

Under the motto “Indivisible,” some 200,000 people from across Germany gathered in the German capital on a sunny Saturday to show their solidarity for human rights and against the rising popularity of the far right.

The event was organized by a broad coalition of groups and counted several Jewish organizations among its sponsors. Organizers had declared their intention to “confront anti-Muslim racism, anti-Semitism, antiziganism [prejudice against Sinti-Roma], antifeminism and LGBTIQ-phobia.”

While the demonstration was largely peaceful, hate speeches against Israel were heard on the fringes. Organizers quickly distanced themselves “unequivocally” from the anti-Israel demonstrators, who “clearly depart from the common ground of our consensus,” event spokeswoman Theresa Hartmann  said in an interview with the BZ newspaper in Berlin. She said the protesters, reportedly affiliated with ultra-left pro-Palestinian groups, were not on the official stage.

Speaking from the rally stage, Lala Susskind, president of the Jewish Forum for Democracy and Against Anti-Semitism, said that “If we are really indivisible, then we can’t simply accept this attack on the world’s biggest Jewish community.”

Observers said the protesters had brought their own megaphone and used it in part to complain about being barred from the official stage.

The demonstration was called in response to the growing popularity of a far-right anti-immigrant political party, the Alternative for Germany, or AfD, and in response to anti-migrant rallies in Chemnitz this month that saw violent attacks on Muslims as well as Jews.

Capped by an outdoor concert, the demonstration was dedicated to “an open and free society — solidarity, not exclusion.” An organizer, Anna Spangenberg, told the weekly Juedische Allgemeine newspaper that the higher-than-expected turnout was a “clear signal of hope.”