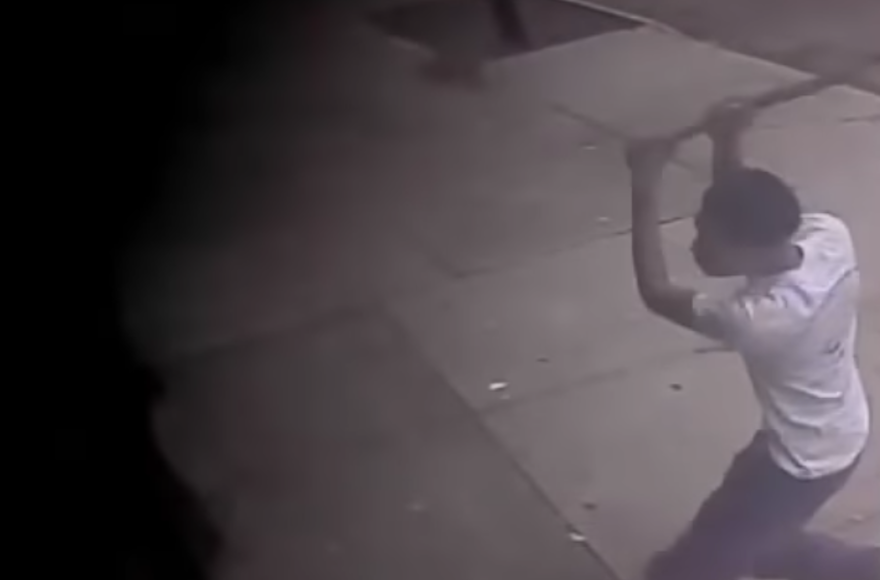 Footage of the assault appeared in video taken from a local store's camera. (Screenshot from YouTube)
Advertisement

(JTA) — A second identifiably Orthodox Jewish man was assaulted in Brooklyn for the second day in a row.

A black teenager carrying a stick began chasing an older Jewish man who attempted to run away. The Jewish man attempted to duck inside a Jewish-owned laundromat, where the teen managed to hit him on his back and shoulders, breaking the stick, according to the report.

Witnesses chased after the teen, who was apprehended and arrested by police with the assistance of the Shomrim volunteer patrol.

The teen, who had been released by police about a half hour earlier after he was caught shoplifting, was charged with felony assault, menacing, harassment and criminal possession of a weapon, as well as a hate crime.

On Sunday, an identifiably Orthodox Jewish man was beaten at a traffic intersection in Brooklyn in an assault that was investigated as a possible hate crime. The assailant has been identified as 37-year-old cab driver Farrukh Afzal. He has been charged with assault, criminal mischief and harassment. He reportedly attacked the victim, identified as Rabbi Lipa Schwartz, 62, because he thought he was an Orthodox Jewish man who had stepped in front of his car earlier in the day.

Yeshiva World News reported that hate crimes charges were dropped and the incident has been labeled a road rage incident. Schwartz claims that Afzal shouted “Allah, Allah,” said he wanted to “kill all Jews,” and made references to Israel throughout the attack. Afzal’s wife told the New York Daily News that her husband, who is from Pakistan and is Muslim, is schizophrenic and was acting out because he did not take his medication.

Evan Bernstein, the Anti-Defamation League’s New York-New Jersey regional director, said in a statement that his organization is “deeply disturbed by and unequivocally condemn these horrific attacks.”

He added: “We cannot allow events such as these to become the new normal. We will continue to offer our support in responding to hate, so that New York City remains safe and inclusive for all.”