Tens of thousands of documents show how Argentina supported the Nazis 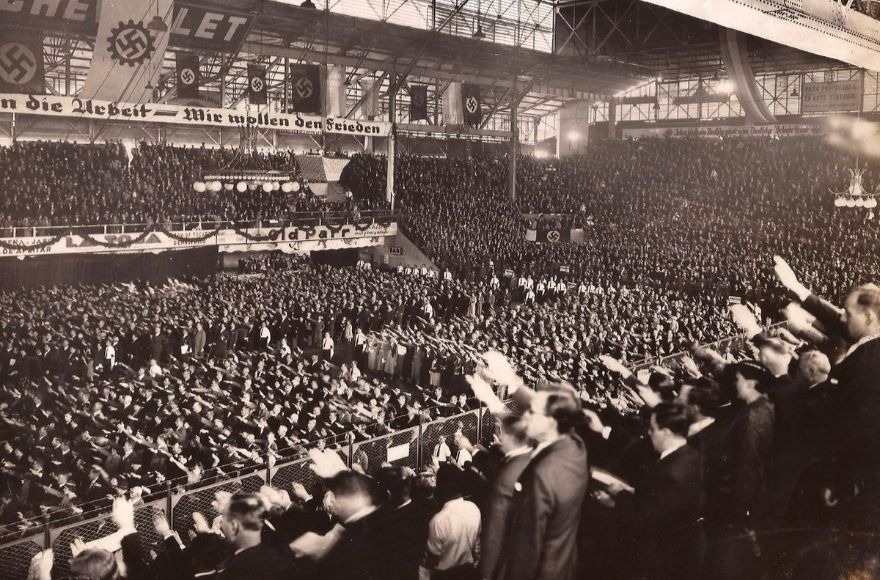 This photo, one of tens of thousans of documents that clarify Argentina's relationship with the Nazis, shows 15 000 people gathered in Buenos Aires at a rally supporting Hitler on April 10, 1938.(Courtesy DAIA)
Advertisement

BUENOS AIRES (JTA) — Argentina’s Jewish political umbrella revealed excerpts from tens of thousands of documents about World War II that shed light on the Nazi influence on the country and the Nazi war criminals who hid there.

In a short documentary released Tuesday, the Delegation of Argentine Jewish Associations, or DAIA, released some images from the documents, including one that shows 15,000 people gathered in Buenos Aires at a sports venue, Luna Park, for a rally supporting Hitler on April 10, 1938.

The documents are expected to clarify the help that Argentina, which stayed neutral for much of World War II before joining the Allies, provided to Nazi war criminals. The country was a postwar refuge for Nazis including Adolf Eichmann, who was captured in the northern area of Buenos Aires in 1960, and form SS captain Erich Priebke.

Among the documents are communications between Argentina and countries involved in World War II — as well as information sent by the Argentine Embassy in Germany. Some documents also contain records related to the blacklist of Jews.

The video presented by DAIA includes images of a resolution by the country’s Foreign Ministry forbidding entry to “non-desirable immigrants,” referring to the Jews who  wanted to escape from the Nazis in Europe.

In 1992, Argentina’s Ministry of Foreign Affairs declassified the 139,544 documents, mostly dated between 1939 and 1950. The digitized documents — mainly letters, telegrams, newspaper articles, notes and reports — total five terabytes of information, or the equivalent of 15,000 CDs.

The documents currently are in the hands of researchers for DAIA’s Center for Social Studies, or CES, and the Ciudadanos Libres por la Calidad Institucional, or Free Citizens for Institutional Quality. The latter institution asked for and obtained the documents from the Argentinean Foreign Ministry about six months ago and agreed to work with the archives in cooperation with DAIA.

The documentary contains the first details of the study of the documents being conducted by a team of researchers .

“The investigation will take some myths about the Nazis in Argentina and replace those myths with facts and truth. We will deliver reports about the main findings of the current work with the historic archives,” Marisa Braylan, the director of CES, the research body of the Argentinean Jewish political umbrella, told JTA.

The short documentary, “The Argentinean Role during WWII,” opens with images of the Nazi gathering in Buenos Aires for, according to DAIA researcher Braylan, “the most important demonstration in favor of Hitler outside Germany.”

Braylan also says in the short video that on Dec. 13, 1939, the German cruiser Admiral Graf Spee arrived damaged at the Montevideo port, in Uruguay, near the Buenos Aires port. The ship was scuttled and “all the crew” were received in Argentina.

The Nazi criminals’ presence in Argentina was recently in the news after an “unprecedented” trove of  Nazi objects was discovered earlier this month by the Argentine Federal Police. A judiciary investigation is underway to confirm their origins and how they arrived in Argentina.