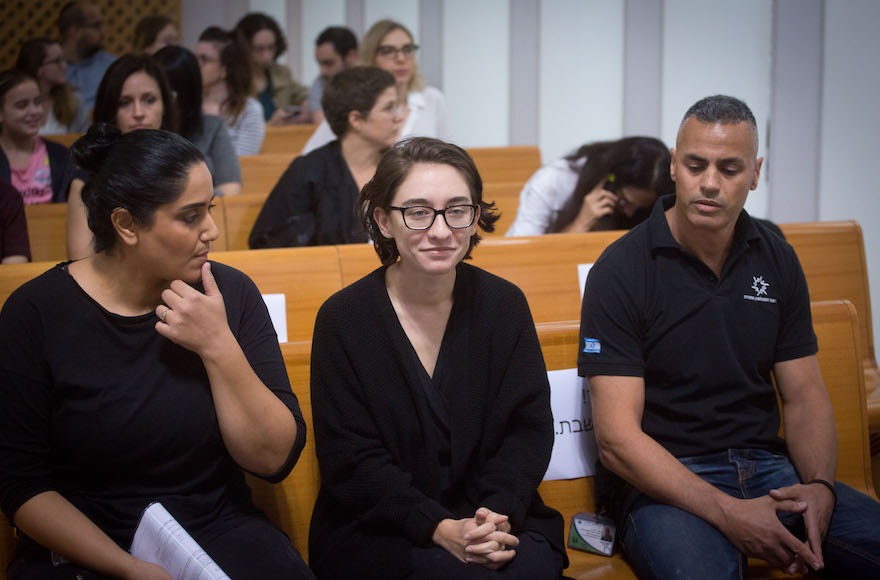 (JTA) — Lara Alqasem, the American student detained in Israel’s airport, has been let into the country after Israel’s Supreme Court ruled that she be allowed to stay and study there.

Alqasem, 22, had been detained at Ben-Gurion Airport since Oct. 2 on suspicion of supporting the movement to Boycott, Divest from and Sanction Israel, known as BDS. She is enrolled as a student in a graduate program in human rights at Hebrew University. Israel sought to deport her under a 2017 law that allows the country to bar entry to BDS activists.

“I’m relieved at the court’s decision and incredibly grateful for the work of my amazing and tireless lawyers Yotam Ben Hillel and Leora Bechor as well as the support of my family and friends,” Alqasem told JTA. “I will be happy to say more when I’ve had a chance to rest and process.”

Alqasem challenged the ban on her entry in Israeli court, and two courts had ruled against her before she appealed to Israel’s Supreme Court this week. The Supreme Court overturned the lower courts’ rulings on Thursday because it found that in seeking to study at Hebrew University, Alqasem was pursuing an increased connection to Israel — rather than a boycott of the country.

“On the eve of the academic year, the plaintiff landed in Israel, and despite the obstacles placed in her way since, she has insisted on her right to sit on the benches of Hebrew University,” read the decision Thursday by Israeli Supreme Court Judge Neal Hendel, who heard the appeal along with two other judges. “This conduct does not accord, to put it lightly, with the charge that the plaintiff is a covert boycott activist who is likely to take advantage of her stay in Israel to advance the BDS movement.”

“[T]he undeniable impression is that the revoking of her permit was due to the political opinions she holds,” Baron wrote in the decision. “If that is indeed the case, this is an extreme and dangerous step that is likely to lead to the crumbling of the pillars on which Israel’s democracy is built.”

Her lawyers called the ruling a victory for free speech, and denigrated Israel’s Interior Ministry for using online evidence of Alqasem’s alleged boycott activity to try to bar her from Israel. Alqasem, a graduate of the University of Florida, had received a student visa from Israel’s consulate in Miami.

“The Supreme Court’s decision is a victory for free speech, academic freedom, and the rule of law,” read a statement following the ruling by Alqasem’s lawyers, Leora Bechor and Yotam Ben Hillel. “Israel has the right to control its borders, but that right does not give the Ministry of Interior unchecked power to turn away anyone it deems unwanted. By taking a principled and brave stand against a wildly escalating power play by the Ministry of Interior, Lara has ensured that no one else should be denied the right to enter Israel based on sloppy Google searches and dossiers by shadowy smear groups.”

Israeli Strategic Affairs Minister Gilad Erdan, who has spearheaded the government’s campaign to keep Alqasem from entering the country, said the ruling shows that the Supreme Court does not understand “the nature and methods of the BDS campaign.”

He added in a statement Thursday that the ruling downplayed Alqasem’s membership in Students for Justice in Palestine, a campus group that supports BDS.

“Their ruling opens the door for BDS activists to enter the country simply by enrolling in an academic program and declaring that they do not support boycotts at the present moment,” he said in the statement. “This ruling will not weaken our determination to combat BDS. We will examine the legal criteria in order to ensure that the original intent of the law is maintained. The principle that whoever acts to harm the State of Israel and its citizens should be refused entry must be preserved.”

Alqasem’s ordeal was the latest test of the controversial 2017 law, which Israel says is a legitimate tool for it to stymie those seeking to undermine the state or its Jewish character. Opponents of the law say it is a betrayal of Israel’s democratic principles and amounts to policing political thought — sentiments echoed by Baron, the Supreme Court judge. Thursday’s Supreme Court ruling did not challenge the legitimacy of the law itself — just its applicability in Alqasem’s case.

Hebrew University, which has lobbied the state to admit Alqasem, also celebrated the ruling.

“The Hebrew University of Jerusalem looks forward to welcoming our newest student, Lara Alqasem, as she begins her M.A. in Human Rights & Transitional Justice at our law school next week,” the school said in a statement.

Three major American Jewish groups declared their support for Alqasem last week: The Reform movement, the Anti-Defamation League and J Street, the liberal Israel lobby. All three groups said Israel would be best served by letting Alqasem see and experience the country for herself.

During her detention, Alqasem was held in a room at the airport and denied visitors save for her lawyers and, in one instance, left-wing Israeli lawmakers. She was also denied a computer, cellphone and pen and paper. Her guards, however, did provide her with a copy of “The Catcher in the Rye,” the coming-of-age novel by J.D. Salinger.