Israel is a hot, if not always relevant, topic in Florida’s governor debate 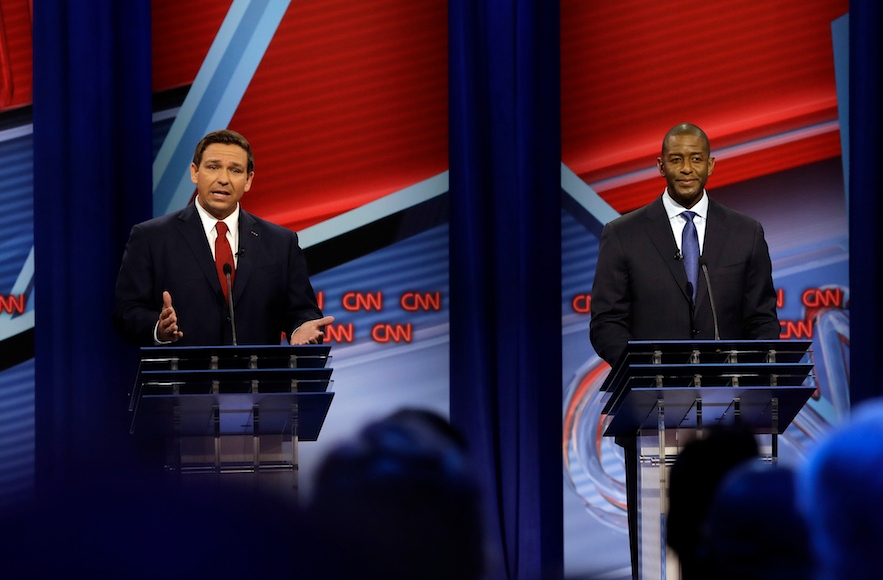 (JTA) — Israel took center stage during a gubernatorial debate in Florida, even when its relevance to the issues wasn’t always apparent.

Ron DeSantis, the Republican congressman whose endorsement by President Donald Trump helped him secure his party’s nomination for governor, twice brought up the country in a debate Sunday evening with his Democratic rival, Tallahassee Mayor Andrew Gillum.

His first reference came after the moderator, CNN anchorman Jake Tapper, asked DeSantis about his association with a donor who made racist comments. Tapper also noted the controversy surrounding the Republican’s first reference to Gillum as the nominee, when DeSantis said voting for Gillum, an African-American, would “monkey this up.”

DeSantis denounced racism — he failed to say why he would not return the donor’s money — and pivoted to suggest Gillum was weak on Israel. He brought up Gillum’s support for Dream Defenders, a black activist group that backs education and prison reform and also has endorsed the Boycott, Divestment and Sanctions movement targeting Israel.

“One of their main planks and platform is to boycott and divest and sanction the State of Israel,” DeSantis said. “Taking positions on Israel like that that may be unifying if you’re running for mayor of the Gaza Strip.”

Gillum, who has acknowledged associating with the group but says he does not agree with its BDS posture, responded by saying “My relationship with Israel is beyond reproach.” He said he had been to the country three times and noted that Tallahassee was twinned with the Israeli city of Ramat HaSharon.

Later in the debate, DeSantis again brought up Israel when Tapper asked him if he thought Trump was a good role model for children. DeSantis has run ads in which he reads Trump’s “The Art of the Deal” to his 2-year-old.

DeSantis said the ad was tongue in cheek before segueing to Trump’s decision to move the U.S. Embassy to Jerusalem.

“I was very passionate about moving our embassy from Tel Aviv to Jerusalem,” DeSantis said, noting that he had traveled to Israel for the inauguration of the new embassy. “Andrew was opposed to that.” (In an interview earlier this year, Gillum said Trump’s decision to move the embassy to Jerusalem was a “provocation” and “unnecessary.”)

DeSantis seemed to make the point that Trump was a good role model for children because he kept his promises.

“Donald Trump promised it and followed through,” the candidate said.

Gillum gave DeSantis a bemused stare and asked Tapper to repeat the question.

“The question was whether Donald Trump is a good role model for the children of Florida,” Tapper said.

“That’s what I thought originally,” Gillum said, smiling. “I got confused.”

DeSantis and Gillum have quarreled previously about Israel in a state where the Jewish vote can be decisive in an election. Both describe themselves as pro-Israel: On his site, Gillum says “I believe strongly in the unique relationship between the United States and Israel” and that he “will continue to push back against anti-Israel efforts, like BDS.”

In 2017, DeSantis led a delegation from the U.S. House of Representatives on a visit to Israel, where they scouted sites for the Jerusalem embassy. He has also spoken about boosting trade between Israel and Florida.