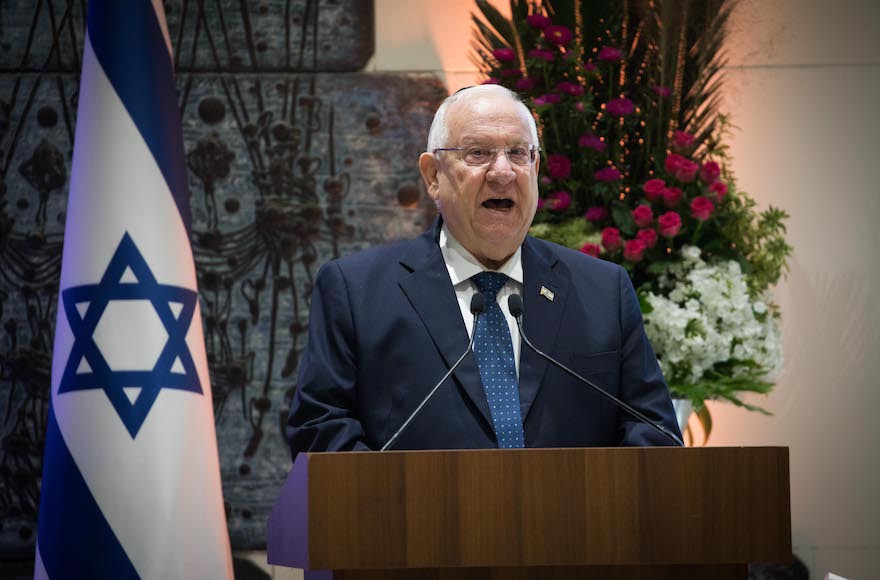 Rivlin made his remarks Monday at the opening of the General Assembly, the annual conference of the Jewish Federations of North America, in Tel Aviv.

Titled “We Need to Talk,” the three-day conference is focusing on the divisions between Israeli and Diaspora Jews. More than 3,000 participants are on hand for the event.

The Jewish Federations of North America is the umbrella body for nearly 150 Jewish federations, which act as central fundraising bodies for Jewish causes and institutions in metropolitan areas throughout the United States and Canada.

Several controversial events in recent years have created rifts between the views of U.S. Jewish organizations and Israeli government policies. The groups have objected to, among other things, the government’s freezing of a plan meant to expand a non-Orthodox prayer area at the Western Wall; the passage of a law this year officially defining Israel as the nation-state of the Jews; a proposed reform of Israel’s conversion policy that would have given more power to Israel’s haredi Orthodox Chief Rabbinate; and a 2017 law barring entry to supporters of the movement to boycott Israel.

Speaking at the conference’s opening session, Rivlin said that while Diaspora and Israeli Jews have differences, they need to prioritize maintaining their relationship. He said that Israelis need to take it upon themselves to learn more about Diaspora Jews, in part through a “reverse Taglit,” Hebrew for Birthright, the free, 10-day trips to Israel for Jewish young adults.

“We need to create wider circles of answers here in Israel,” he said. “For many young Israeli Jews, being a Jew means being Israeli. We must increase their exposure to your schools, camps and communities. They need to realize and to feel that they have a family, a family that [they] must take into account.”

On Sunday, at an event at Rivlin’s official residence in Jerusalem preceding the General Assembly, the head of New York’s UJA-Federation said some young American Jews did not see their values reflected in Israel’s policies.

Eric Goldstein, the federation’s CEO, said “The Jewish identity of many young American Jews is reflected through the lens of tikkun olam, social justice values, and they experience a mental discomfort when they use that lens to look at many current Israeli government policies: settlement policy, nation-state law, treatment of asylum seekers, marriage equality and marriage rights — more broadly, the monopoly that the Orthodox has over religion and state in Israel.”