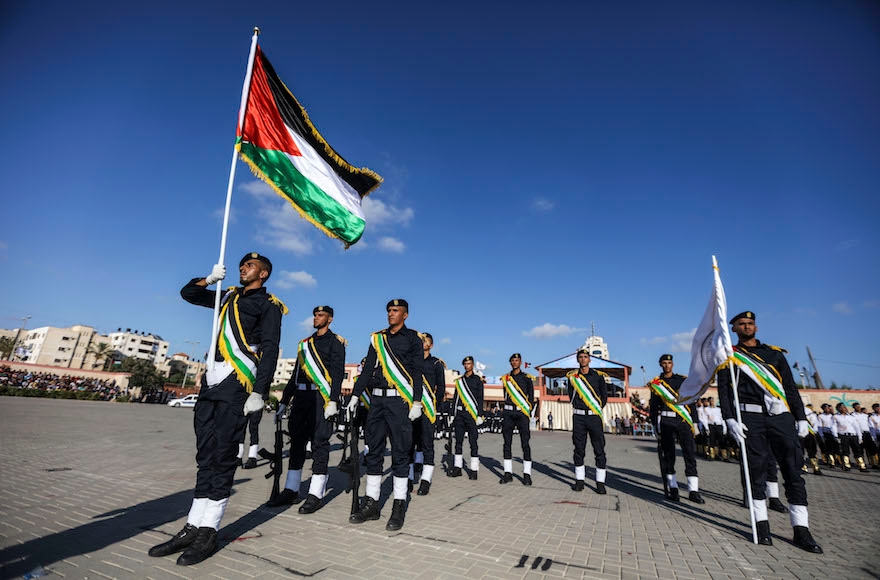 As the Palestinian Authority-Hamas feud has deepened, each has targeted the other’s supporters, the report released Tuesday says.

The Palestinian Authority, led by the Fatah Party of President Mahmoud Abbas, runs the West Bank. Hamas, which has been designated as a terrorist organization in the United States, runs Gaza.

Titled “Two Authorities, One Way, Zero Dissent: Arbitrary Arrest and Torture Under the Palestinian Authority and Hamas,” the report details more than two dozen cases of people detained for no clear reason beyond writing a critical article or Facebook post, or belonging to the wrong student group or political movement.

“Twenty-five years after Oslo, Palestinian authorities have gained only limited power in the West Bank and Gaza, but yet, where they have autonomy, they have developed parallel police states,” said Tom Porteous, the deputy program director at Human Rights Watch. “Calls by Palestinian officials to safeguard Palestinian rights ring hollow as they crush dissent.”

Other tactics Human Rights Watch found that are used to silence activists include seizing and searching cellphones, leaving investigations and charges open, and coercing dissenters to promise to stop their criticism.

Both the P.A. and Hamas deny that abuses amount to more than isolated cases that are investigated and for which wrongdoers are held to account. Human Rights Watch said the evidence it collected contradicts these claims.

The systematic arbitrary arrests and torture violate major human rights treaties recently joined by Palestine at the United Nations, where it has permanent observer status. For example, according to Human Rights Watch, the systematic practice of torture by Palestinian authorities may amount to a crime against humanity prosecutable by the International Criminal Court. Human Rights Watch has long encouraged the ICC prosecutor to open a formal probe into Israeli and Palestinian conduct in Palestine, which is a member of the ICC.

Human Rights Watch called on the European Union, the United States and other governments that financially support the Palestinian Authority and Hamas to suspend aid to the specific units or agencies implicated in the report.