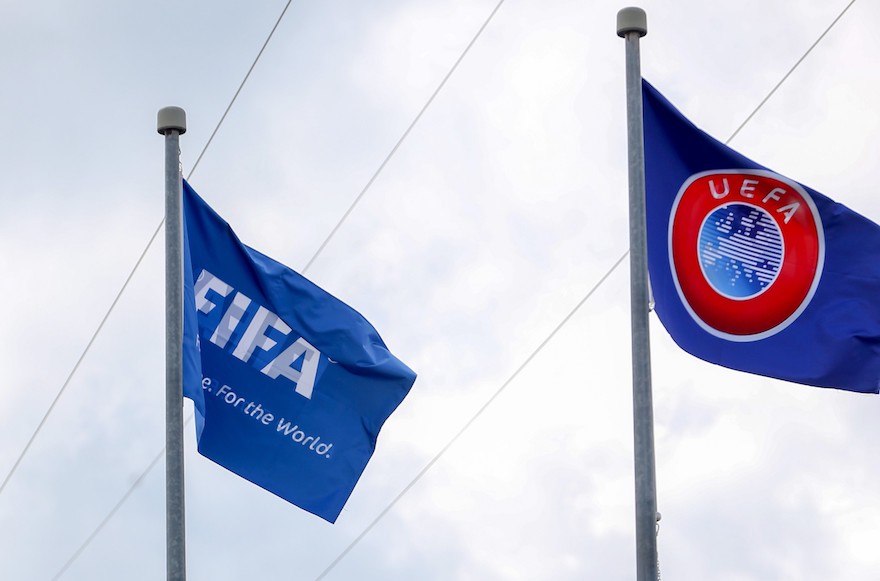 ISTANBUL, TURKEY - SEPTEMBER 22: A photo shows the logo and sign board of 'Turkish Football Federation' and flags of UEFA and FIFA in Istanbul, Turkey on September 22, 2018. (Photo by Emrah Yorulmaz/Anadolu Agency/Getty Images)
Advertisement

JERUSALEM (JTA) — In a reversal, Israel’s public broadcaster will be allowed to air the preliminary games of the World Cup and Euro 2020 soccer tournaments, including in West Bank settlements.

The Union of European Football Associations, or UEFA, walked back its original decision not to allow Kan to air its games in West Bank settlements. Kan programming is broadcast throughout the West Bank on regular media airwaves, as well as though satellite and cable television providers.

Israel’s national broadcaster won the rights to the games with a bid of about $5.8 million, but has not been able to sign the contract due to the requirement that it only show the games within the country’s 1967 borders, which exclude the West Bank and eastern Jerusalem, Yediot Acharonot first reported.

Another company, located in Qatar, reportedly won the rights to broadcast the games to the Palestinians.

On Tuesday, Kan said that the UEFA will allow it to broadcast the games in both Hebrew and Arabic to all citizens and residents of Israel. Kan shows the games on two channels — one with Hebrew commentary and the other with Arabic commentary.

Kan had said originally it would choose not to broadcast the games at all rather than not show them to Israelis over the 1967 borders, or Green Line.