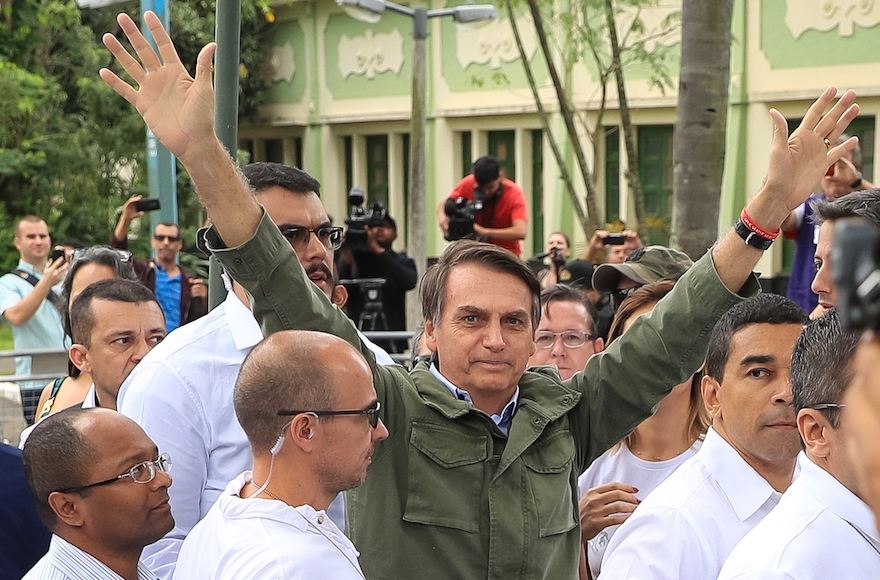 RIO DE JANEIRO (JTA) — Brazilians elected a president who is a far-right, ardently pro-Israel veteran pol who once declared “My heart is green, yellow, blue and white,” in a reference to the colors of the Israeli and Brazilian flags.

Jair Bolsonaro, a 63-year-old seven-term congressman who built his campaign around pledges to crush corruption and crime, secured over 55 percent of the vote, an 11 percent lead over his far-left rival Fernando Haddad.

“We cannot continue flirting with socialism, communism, populism and leftist extremism … We are going to change the destiny of Brazil,” said Bolsonaro in his late Sunday night acceptance speech broadcast from his home in Rio, which showed a Jewish menorah in the background of the video.

Highly divisive among Jewish voters, the Conservative lawmaker — whose middle name, Messias, literally means “messiah” — won the ballot after a drama-filled election that looks set to radically reforge the future of the world’s fourth biggest democracy, leaving nearly 15 years of far-left governments behind.

“I have just congratulated president-elect @jairbolsonaro for the historic victory won today. Once the election is over, it is time for all, united, to continue working for Brazil,” Brazil’s President Michel Temer, who rose to power to replace impeached Dilma Rousseff, tweeted overnight.

For many Jewish voters, Bolsonaro has always been a dream president. He has declared he will move the Brazilian embassy to Jerusalem from Tel Aviv. His first international trip as president, he said, will be to Israel, with which he will seek to broaden the dialogue. And he promised to close the Palestinian embassy in Brasilia.

“Is Palestine a country? Palestine is not a country, so there should be no embassy here,” Bolsonaro said weeks ago. “You do not negotiate with terrorists.”

RELATED: How ‘Brazil’s Trump’ is winning over Jewish voters

The pol’s victory means, many hope, the longtime anti-Israel sentiment of far-left Rouseff and Luis Inacio Lula da Silva, who is serving a 12-year prison sentence for corruption and money laundering. One low point in Brazil-Israel relations came in 2014, when the Brazilian government recalled its ambassador to Israel for consultations during that summer’s war in Gaza, and a former special adviser to Rouseff described Israeli military actions there as a “massacre.”

“Bolsonaro stood out among the many candidates for including the State of Israel in the major speeches he made during the campaign,” Israel’s honorary consul in Rio, Osias Wurman, told JTA last week. “He is a lover of the people and the State of Israel.”

On Sept. 6, Bolsonaro was stabbed and seriously injured during a street rally while campaigning. After receiving local emergency treatment, Bolsonaro chose to be transferred to a Jewish hospital in Sao Paulo to recover from life-threatening injuries. The fact that the politician declined treatment offered by the Syrian-Lebanese Hospital, an elite hospital commonly chosen by senior politicians, led to conspiracy theories in social media.

The most radical among Bolsonaro’s nearly 10 million followers suggested his life would be at risk at a place “by the hands of Arab and Muslim doctors,” adding that at the Jewish-led Albert Einstein hospital, Israel’s Mossad would be able to protect him.

Dubbed “Brazil’s Trump,” Brazil’s president-elect is referred to by opponents as “extreme” and “a risk” to democracy. The former army captain waxes nostalgic about Brazil’s 1964-1985 military regime, and has derided gays, women and minorities. Some have gone so far as to liken him to Adolf Hitler and the Nazi Party.

Bolsonaro’s supporters usually refer to him by the nickname “Mito,” from the word myth or legend. His three sons, also politicians, have been photographed wearing T-shirts with messages in Hebrew. One of them was elected senator earlier this month.