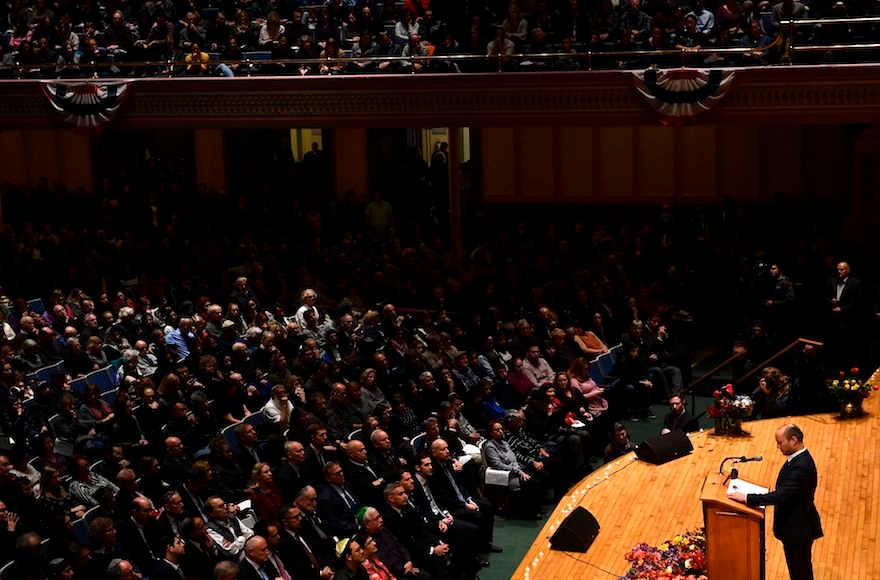 Naftali Bennett, Israel's minister for Diaspora, speaks during a vigil to remember the victims of the shooting at the Tree of Life synagogue the day before, at the Allegheny County Soldiers Memorial in Pittsburgh, Oct. 28, 2018. (Brendan Smialowski/AFP/Getty Images)
Advertisement

PITTSBURGH (JTA) — Naftali Bennett, Israel’s minister for the Diaspora, likened the killer who massacred 11 Jews  at a Pittsburgh synagogue to the terrorists who fire missiles at Israel.

“The hand that fires missiles is the same hand that shoots worshippers,” Bennett said Sunday evening at a memorial the day after attack on the Tree of Life Congregation. The suspected gunman said he was determined to kill Jews.

“We shall fight anti-Semitism wherever it raises its head and we shall prevail,” he said at the interfaith event at the Soldiers and Sailors Memorial Hall.

Bennett, who flew out from Israel on Saturday night, was greeted warmly.

“I saw a war and diverse community of love and unity,” he said.

Tree of Life is a merger of two Conservative congregations. Its building also houses Dor Hadash, a Reconstructionist congregation.

“I saw Etz Chaim, the Tree of Life, which will never be uprooted by hate,” Bennett said in his address.

He alluded to tensions between American Jewish groups and his government, led by Prime Minister Benjamin Netanyahu, over the status of non-Orthodox movements, and appeared to suggest that it was time to resolve the tensions.

“The murderer’s bullet does not stop to ask: Are you Conservative or Reform, are you Orthodox? Are you right wing or left wing? It has one goal, and that is to kill innocent people. Innocent Jews.”