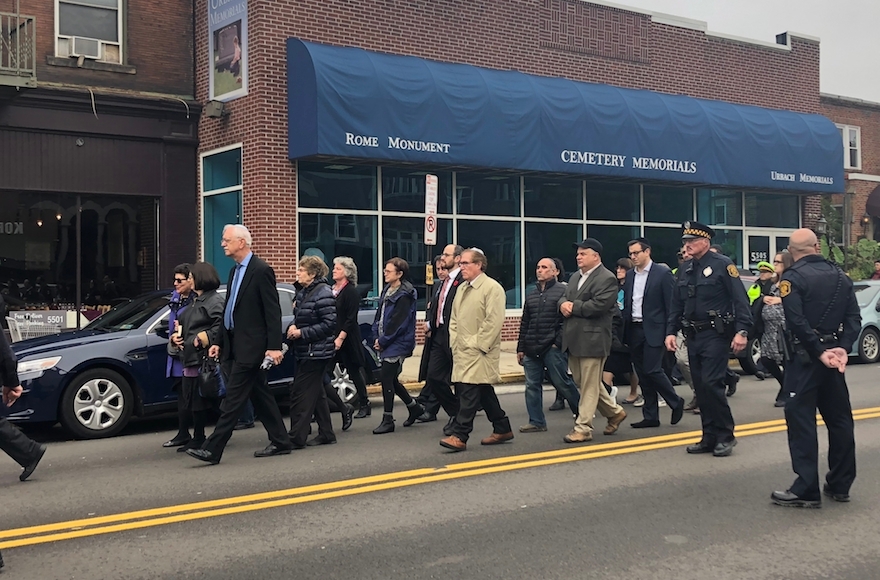 Mourners walking at the funeral of Bernice and Sylvan Simon on Thursday, Nov. 1, 2018. (Arielle Kaplan)
Advertisement

PITTSBURGH (JTA) — Bernice and Sylvan Simon were married in the sanctuary of Tree of Life Congregation 62 years ago. Week after week they attended services there, chatting with the Holocaust survivor who sat a row in front of them.

And on Saturday, hours before they were to gather with their family to celebrate their daughter’s birthday, that is where they were gunned down in the massacre that killed 11 Jews.

In their eulogies Thursday at the Ralph Schugar Funeral Chapel here, the Simons’ children and grandchildren painted the picture of a warm, loving couple who were, in nearly every way, the ideal American bubbe and zayde.

For more than six decades they built a family that became the center of their lives — creating memories at birthdays and holidays over meals with Bernice’s famous mashed potatoes, and in the living room with Sylvan as he cheered on Pittsburgh’s Pirates, Steelers and Penguins.

“It is so hard to believe that she will never again take my hand and ask me, ‘Do you know how much we love you?'” Marissa Simon, their granddaughter, said of her Bubbe Bernice. “My bubbe and zayde lived a life full of love and happiness, and the very ugly acts committed on the morning of Oct. 27 will never be able to erase the beauty of my grandparents.”

Marissa wasn’t the only family member who expressed disbelief that Bernice and Sylvan had their lives cut short. The wife and husband, ages 84 and 86, respectively, were described as full of energy, life and humor. Their eldest son, Marc, said that when he went to their house following the shooting, he found it all set up for his sister’s birthday party. He kept expecting them to walk down the stairs.

“Our parents did everything together as a married couple,” he said. “They were deeply in love with each other. … Most days, it was not possible to reach them on their home phone. They were either out shopping, running errands, meeting with friends, volunteering with community organizations, attending synagogue or, as [is] normal with advanced age, going to doctors’ appointments.”

The Simons experienced tragedy in 2010 when one of their four children, Martin, died in a motorcycle accident. They stayed close with the rest of their children and grandchildren, even though some were far away. Their son Michael, who lives in California, still spoke with his parents two or three times a week — they were especially interested in how his kids were doing in school and how their new puppy was behaving. 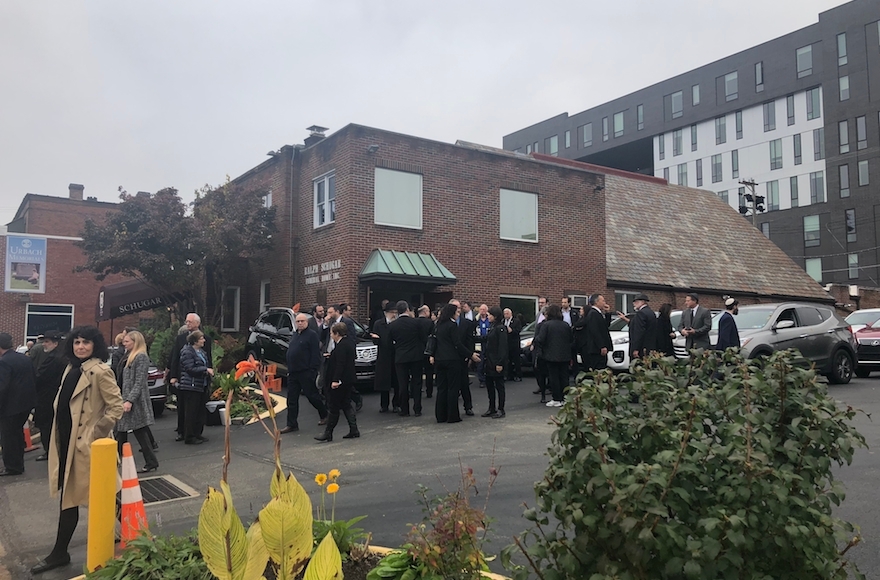 Mourners gather outside the funeral home for the service of Bernice and Sylvan Simon, Nov. 1, 2018. (Arielle Kaplan)

“Even though there was some distance between us, we were still major parts of each other’s lives,” Michael said. “During our conversations, I could always hear my dad in the back asking questions or commenting on our conversations. My mother would always say ‘Wait your turn, Syl.'”

Marissa remembered her grandfather as a loquacious jokester who nevertheless used to let her style his hair when she was little.

“My zayde always had a way of making you feel warm,” she said. “He always told me that he was proud of me and that I had to work hard to become a doctor, so that I could take care of him. I am so sad that I will never have the chance to do that.”

Marissa recalled Bernice skipping along with her singing “A Bushel and a Peck,” and said that “she was always there when I needed her, even when I thought that I didn’t.”

The six family members who spoke — three children and three grandchildren — said they cherished the memories of times together with Bernice and Sylvan — and were pained they would not have them anymore.

“Let’s take my parents’ great love, admiration and understanding for each other to serve as a beacon of light for everyone,” Marc said. “To shine throughout the world, to mitigate and ultimately eliminate the kind of hate that fostered this horrific event.”

The Simons are survived by three children and six grandchildren.

The suspect in the shooting attack pleaded not guilty at his arraignment Thursday morning in a federal courtroom. Federal prosecutors are seeking approval to pursue the death penalty against him.