White House says all Iran sanctions will be reimposed, but there are exceptions 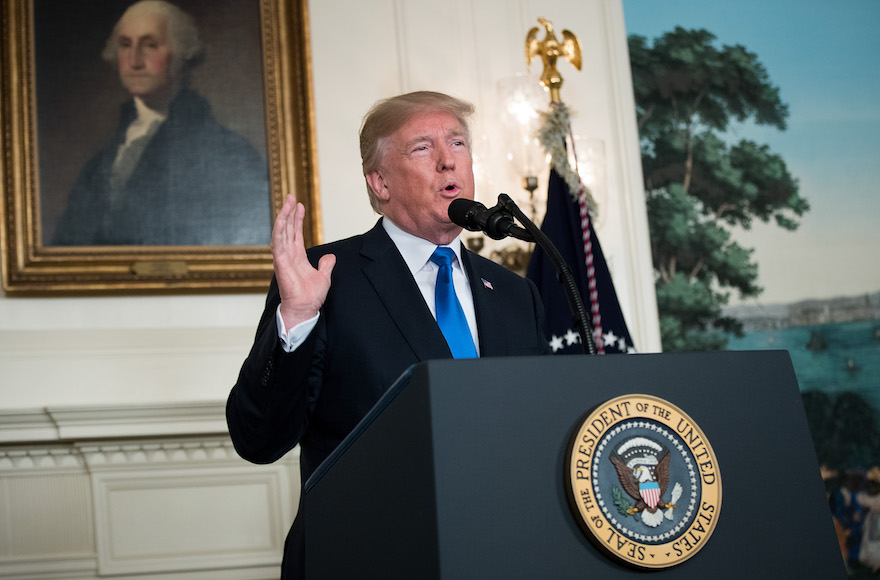 President Donald Trump talking about his administration's strategy for dealing with Iran, in the Diplomatic Reception Room in the White House, Oct. 13, 2017. (Drew Angerer/Getty Images)
Advertisement

WASHINGTON (JTA) — The Trump White House on Friday announced that “all the sanctions” relieved under the 2015 Iran deal would be reimposed, but top Trump officials were simultaneously listing caveats.

“On November 5, 2018, all United States sanctions that were lifted under the disastrous Iran nuclear deal will be fully reimposed,” the White House statement said. “Together with the unprecedented sanctions actions taken by the Trump Administration, this will be the toughest sanctions regime ever imposed on Iran.”

It added, “sanctions will target critical sectors of Iran’s economy, such as its energy, shipping, shipbuilding, and financial sectors.”

But officials would not yet outline which entities would face sanctions. It was clear already there would be exemptions, making it difficult to assess whether the new sanctions would outdo the multinational sanctions coordinated in 2010 by the Obama administration, considered the toughest ever on Iran.

Secretary of State Mike Pompeo and Treasury Secretary Steve Mnuchin, in a conference call with reporters, acknowledged there would be eight cut-outs, but said these would be temporary, and that six of the countries would be expected to “greatly reduce” oil purchases and two will eventually have to cut off Iran completely. They would not name the countries.

Pompeo and Mnuchin also declined to say whether Iran’s Central Bank would be on the list. Cutting off the Central Bank from dollar markets, as was done under the Obama sanctions, was critical in starving Iran’s economy from cash.

President Donald Trump has reviled the multinational Iran nuclear deal negotiated by his predecessor, which traded sanctions relief for nuclear rollback. Trump called it the “worst ever” deal and pulled out of it in May. The six-month lead time for reimposing sanctions ends Monday.

Other parties to the 2015 deal, known as the Joint Comprehensive Plan of Action, including European nations, have stuck with the deal. Trump administration officials have said that the U.S. sanctions, while unilateral, are nonetheless having an effect and have isolated Iran.

Rep. Eliot Engel, D-N.Y., the top Democrat on the House Foreign Affairs Committee, opposed the deal, but also opposed pulling out of the deal. On Friday, he said the exemptions reinforced his position.

“Whatever its flaws, withdrawing from the Iran deal was a mistake,” he said in a statement. “Today’s announcement—that the Administration is immediately waiving the re-imposed sanctions— shows why. Countries are free to conduct sanctionable activity that lines Iran’s coffers, which could allow the regime to continue its support for terrorism and other destabilizing behavior across the region.”