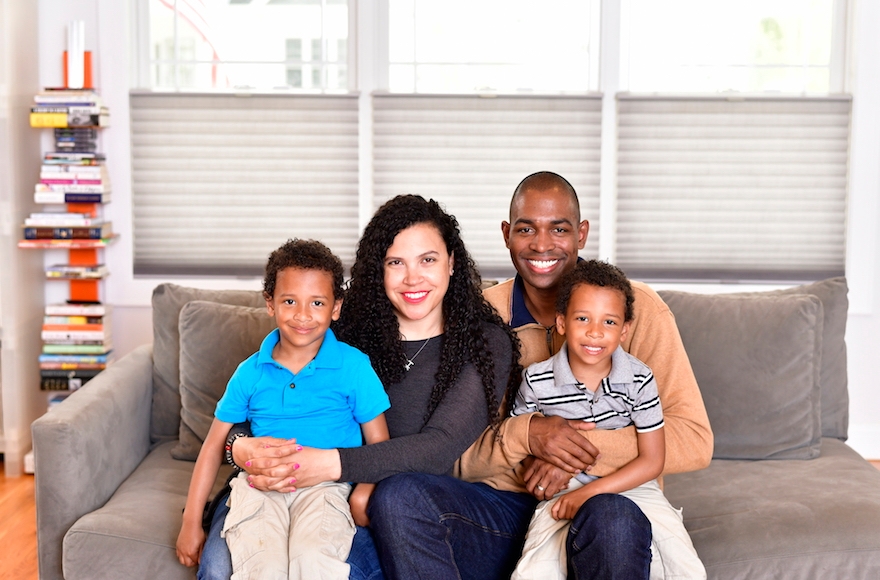 Lacey Schwartz Delgado with her husband Antonio and their two children Maxwell and Coltrane. (Courtesy of Antonio Delgado for Congress)
Advertisement

NEW YORK (JTA) — In 2014, Lacey Schwartz Delgado made headlines around the world for a documentary in which she explored a shocking family secret.

“Little White Lie” tells Schwartz Delgado’s real-life story of being raised in a white Jewish family in the upstate New York town of Woodstock. Though she had a darker complexion than other family members, she was told she had inherited her Sicilian Jewish grandfather’s skin tone.

In college, however, she could no longer ignore the reality that she didn’t look white. She confronted her mother, who eventually admitted that Schwartz Delgado’s father was actually an African-American family friend with whom she had an affair.

The revelation set the filmmaker on a path of self-discovery, which she shows in the documentary. She currently serves as the national outreach director for Be’chol Lashon, a group that advocates for diversity in the Jewish community.

Four years after the film’s release, Schwartz Delgado, 41, is on yet another new path, as her husband Antonio Delgado is running to represent New York’s 19th district in the House of Representatives. He is in a close race against Republican incumbent John Faso, pushing a platform that includes protecting local jobs, supporting universal healthcare and safeguarding the environment.

JTA spoke with Schwartz Delgado on the phone last week about her involvement in the campaign, her husband’s view on Israel and how the couple, who met as students at Harvard Law School, are raising their 5-year-old twin boys Jewish.

The following excerpts from the conversation have been edited for clarity and style.

JTA: How did you and Antonio decide that he would run for office?

Schwartz Delgado: We had a real coming together moment for a variety of different reasons after the 2016 election. We were turning 40. He was at a real crossroads with his professional [law] career, and I had gotten off the road after being on the road for the greater part of two years promoting “Little White Lie,” and we realized that a lot of the country was jokingly saying “Let’s move out of the country,” while we wanted to do the opposite, which was move back home.

We have 5-year-old identical twin boys, and two sets of what I call empowered grandparents, and so it was really about, how do we live our ideals, how do we live near family and where and how are we going to raise our children? And with that we also started looking into political spaces, which my husband has been more traditionally oriented to but had problems with the system. We have problems with money in politics and with the way in which when you get into it you have to open yourself up to unfortunate, inevitable personal attacks that come with it. But when we looked around and we saw what was going around, we felt like both on the left and the right, that the world was becoming too extreme.

Were you surprised that he decided to run for office?

I’m not totally surprised that he’s running for office. I think my involvement to the degree that it is surprises me more in a sense. I would have obviously always supported him and of course I believe in him, and I am partially involved because I am supporting him. But to the degree that I am involved it’s really not him, it’s about my strong viewpoints on what it takes to build a stronger community and how important community is for me. One of those things that we’ve seen in my opinion fail for the political system in the past few decades is an overemphasis on the presidency and federal politics, as opposed to starting at the bottom and launching it from bottom up, looking at our villages and our towns and our counties and our states.

How do you relate to Judaism as a family?

I grew up in a Jewish community near where we live. I was bat mitzvahed here. And Antonio was not raised Jewishly but we have very much embraced passing down Judaism to our kids. Our kids are five years old, so we are in certain ways very similar to many families who have kids of this age, whether or not they are two Jewish parents or only one Jewish parent. He has been exposed to what Judaism looked like in my family in previous generations. I think like many people the traditions I learned from my family are a large part of my Judaism, and I have my own connections through Jewish wisdom. So I think like many young families we’re at a very typical point where were figuring out what does it look like for our family.

In your documentary you explore how your newfound racial identity clashed with you being raised as a white Jew. How do you relate to that now?

There’s always this conversation about where is the black-Jewish dialogue, but there’s a bunch of us who are actually having those conversations internally and struggle to internally integrate those identities. I think a lot of that is because society was almost telling us that being black and Jewish was at times almost diametrically opposed, and in fact it’s not in reality. So for me it was going through a process and truly an educational experience of learning the reality of who we are as a Jewish people, which is diverse group of people, from very diverse backgrounds.

He understands the deep importance of Israel, and I think in terms of the conversation, he did clarify it in terms of it being a tense thing and he clarified it quite specifically in terms of his complete support for Israel. I think it just goes to speak to that all too often in the political space, rather than it being a dialogue, people want to jump on something and misinterpret it and put it into a certain box, and I think that is not who we are. We are not somebody who is out here talking about issues for political sake. We are living it, we are putting ourselves through the process, we’re asking ourselves the hard questions and we’re making sure that we remain committed to the ideals that we believe in, and support for Israel is a big one of them, for both of us as a Jewish family.