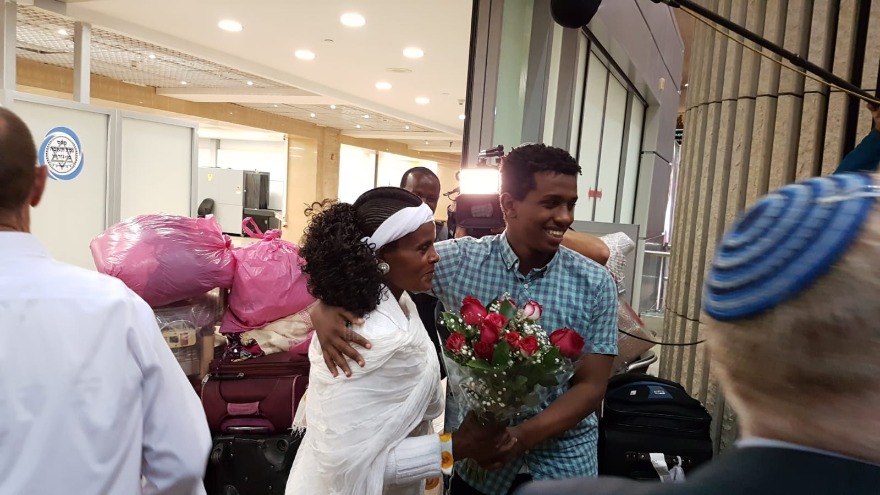 Sintayehu Shaparou is reunited with his mother, Alem Wondie, at Ben Gurion International Airport on Nov. 6, 2018.

JERUSALEM (JTA) — The family of an Ethiopian teen who was granted residency status in Israel after he had participated in the International Bible Quiz arrived in Israel.

The family of Sintayehu Shafrao, 18, who arrived on Tuesday night, is the only Ethiopian family to be allowed to immigrate to Israel this year.

Shafrao was reunited with his mother, three siblings and a nephew. They moved into a rented apartment in Kibbutz Kiryat Menachem. He has other siblings who already were living in Israel.

The family’s flights and initial expenses are being paid for by The Heart of Israel, which raised money to support the cause mainly from Christian Zionists.

In April, Shafrao was ordered to deposit thousands of dollars in order to participate in the final stages of the Bible competition to guarantee that he would leave when it was over. Later, however, the teen was granted permanent residence in the country.

After he arrived in Israel, Shafrao met with Israeli lawmakers and government ministers, including Justice Minister Ayelet Shaked. During the meetings he pleaded for the lawmakers to bring the remaining Ethiopians to Israel as soon as possible.

The Falash Mura claim links to descendants of Jews who converted to Christianity generations ago under duress but now seek to return to Judaism. They must get special permission to immigrate to Israel due to their uncertain Jewish status.