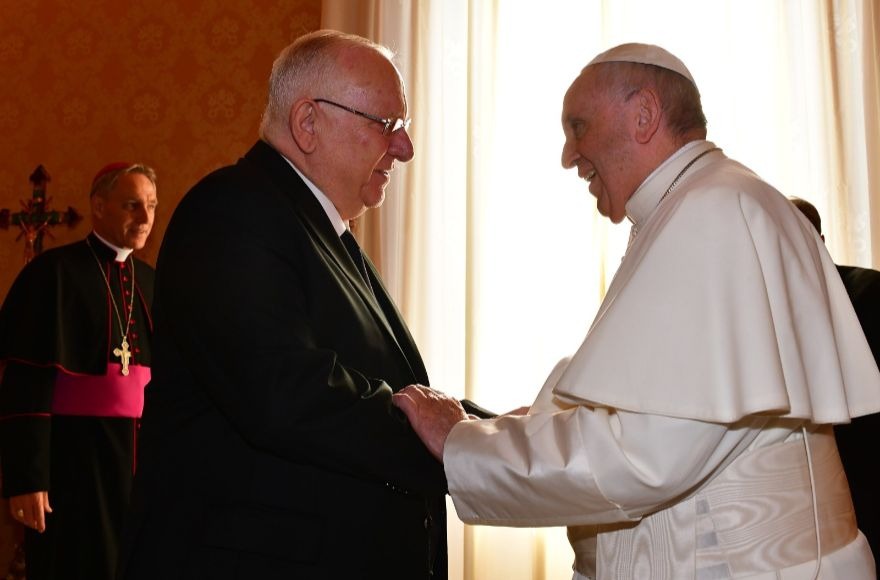 Israeli President Reuven Rivlin has an audience with Pope Francis at the Vatican on Nov. 15, 2018. (Kobi Gideon/GPO)
Advertisement

(JTA) – Israeli President Reuven Rivlin at a private audience Thursday with Pope Francis emphasized that his country has “full freedom of worship for all religions in all holy places.”

At their Vatican meeting, the pope and Rivlin also discussed the need to build “greater mutual trust” between Israelis and Palestinians as a basis to resume negotiations and reach a just accord. A Vatican statement said they spoke about “the importance of building greater mutual trust in view of the resumption of negotiations between Israelis and Palestinians so as to reach an accord respecting the legitimate aspirations of both peoples.”

They also discussed “the Jerusalem question, in its religious and human dimension for Jews, Christians and Muslims, as well as the importance of safeguarding its identity and vocation as City of Peace.”

Rivlin said during the meeting, according to a statement from his office, that “Jerusalem has been a holy city for the three monotheistic religions for centuries. For the Jewish people, Jerusalem has been the spiritual center since the days of the First Temple over 3,000 years ago, but it is also a microcosm of our ability to live together.”

He told the pope that Israel would not “stand by” if Hamas continued to send rockets into Israeli territory.

“Israel does not want escalation or to hurt innocent civilians, but will not stand by while Hamas undermines stability and our civilians are harmed,” Rivlin said.

Rivlin and Francis also reflected on positive developments in relations between Israel and the Holy See in the 25 years since the establishment of formal ties in December 1993.

The Israeli president, who had first met with Francis in 2015, thanked the pope for his firm stand against anti-Semitism, saying the pontiff’s condemnation and definition of anti-Semitic acts as anti-Christian “are a significant step in the ongoing fight to stamp it out.” Last week, Francis met with a delegation of Jews from the Caucasus and said anti-Semitism contradicted the Catholic faith.

Following the audience with the pope, Rivlin met with Cardinal Secretary of State Pietro Parolin. He is scheduled to meet Friday with the president of Italy, Sergio Mattarella, and its prime minister, Giuseppe Conta.