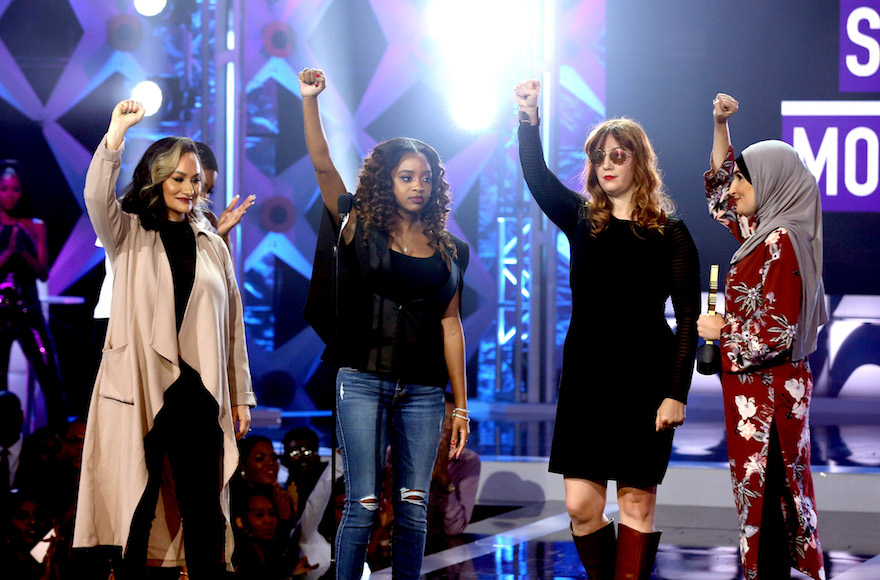 NEW YORK  (JTA) — The same Jewish liberals who gave in to efforts by the Jewish right to divide the black and Jewish communities in the ’70s are back again to divide Jews from their would-be allies, and this time they’re dead set on being the breach in the dam that lets the Nazis through.

Not three weeks after the worst massacre of Jews by a white supremacist in American history, Jewish liberals and conservatives alike have found a target for their wrath, and it’s none other than Palestinian-American activist Linda Sarsour.

Any day now the president of the United States can sign an executive order, as he has threatened to do, that will strip citizenship from those who were born in America to parents that were here illegally. Forgive me if I take this personally, as the son of a septuagenarian mother who was born to two Holocaust survivors who sneaked into the country by overstaying their tourist visas.

While this possibility simmers in the background, undocumented and documented immigrants are being rounded up, thrown in cages, having their kids taken from them and sent halfway across the country, and are then deported without their children. These kids, who when they are are lucky enough to be reunited with their parents, suffer from severe emotional and psychological trauma from which they may never recover.

In light of this and the administration’s attacks on the rights of transgender men and women, women’s right to choose, the rights of workers to organize in their workplaces and the right of black people to vote, it becomes clear that everything this administration stands for will result in the destruction of all that we as Jewish people of conscience purport to care about.

So when, inspired by a president who openly blames prominent liberal Jews for that which white nationalists refer to as “white genocide,” a neo-Nazi walks into a shul and kills a bunch of liberal Jews, you’d think that our energy would stay focused on the existential threat in the White House — something actually leading to Jews being killed.

Instead, the dishonorable Minister Louis Farrakhan says something abhorrent, and suddenly all of the energy and anger after Pittsburgh has been shifted away from the president and onto Farrakhan and the left that supposedly embraces him.

Farrakhan, as is well known, is not a leftist but a right-wing conservative religious fundamentalist who once said “I like what I see” in Donald Trump after Trump told the Republican Jewish Coalition that they won’t support him because they “can’t buy” him. (As is usually the case, Trump was wrong on both counts.)

Farrakhan is also a virtual nobody with virtually no power in the broader American context, who has no hope of ever being in public office let alone president of the United States. He will never have the sway or influence the president has to inspire acts of anti-Semitic violence. And while Farrakhan may boast tens of thousands of supporters, Trump has tens of millions. Unlike President Trump and his white supremacist base, Farrakhan is not an existential threat to Jewish people.

Of course, Linda Sarsour has denounced Farrakhan’s rhetoric and the Women’s March has repeatedly issued statements saying that they find his views reprehensible and incompatible with their movement. But because Sarsour and her co-organizers won’t outright condemn him — due to the mostly positive role his organization is seen as playing in the black community and, in turn, how that may alienate a great deal of black people from their movement — they are seen as being on par with the likes of white supremacist Richard Spencer.

Never mind that Sarsour, even after being vilified and called a terrorist and all manner of degrading racist and Islamophobic insults by a significant portion of self-identified liberal Jews, continues to stand up against anti-Semitism and white supremacy. Never mind that she raised $150,000 to help with the funeral expenses of the Pittsburgh victims and organized a rally in front of the White House the day after the attack to call out our president for inspiring it. The real threat to American Jewry isn’t the guy in the White House inspiring neo-Nazi murders, it’s the woman in the hijab protesting him.

This is precisely what the right wing wants: For minorities to be at each other’s throats and demonize one another so that we never unify against them and they can continue on with their agenda unopposed.

Liberal Jews have unfortunately been all too eager to estrange themselves from those on the left who offer even the slightest expression of solidarity with Palestinians. In just the last decade and a half, liberal Jews have abandoned not only their fellow Jews who have come to embrace the Palestinian-led BDS movement, but most major progressive movements including the anti-war movement, Occupy Wall Street, Black Lives Matter, the Dyke March, the Bernie Sanders campaign and now the Women’s March, each for unapologetically defending the rights of Palestinians.

(Some may recall that the original objection to the leadership of the Women’s March was not Tamika Mallory’s association with Farrakhan, but Sarsour’s interview with The Nation wherein she said that a true feminism cannot overlook the suffering of Palestinian women, which was clickbaitingly and misleadingly titled “Can You Be a Zionist Feminist? Linda Sarsour Says No.”)

This increasingly universal support for Palestinians on the left has been turned into a wedge by those on the right, used to vilify and demonize the left as anti-Semitic and an unsafe home for Jews. But the left isn’t violently attacking Jews  —  it’s making Zionists feel uncomfortable, which is probably how you should feel if you are providing tacit support for the denial of another people’s human and civil rights going on half a century.

Yes, there is anti-Semitic violence that transpires in the name of solidarity with Palestinians, but that violence is generally committed out of ethnic or religious hatred, not as an expression of leftism — unlike white supremacist violence, which is firmly rooted in the ideology of the right. It is not left-wing anti-Zionists who have hopped into bed with Donald Trump and fascist leaders around the world, emboldening anti-Semites like Viktor Orban, or who sought to downplay the threat of far-right anti-Semitism after the Pittsburgh attacks. It is the right-wing government of the State of Israel that has done this. It was Israel’s Diaspora Minister Naftali Bennett and Ambassador to the United States Ron Dermer who told mourning congregants at Pittsburgh’s Tree of Life synagogue that Trump was not to blame for inspiring the massacre of their friends and loved ones, but rather laid fault with the nonviolent BDS movement and their own complacency as American Jews.

Like Louis Farrakhan, members of Benjamin Netanyahu’s administration are spotlight-seeking religious conservatives and ethnonationalists with a long history of racist vituperations, and whose offenses are overlooked by their communities out of tribal loyalty. Some are even outspoken admirers of the late Meir Kahane, the Brooklyn rabbi who established a political movement in Israel that was ultimately banned for its open advocacy of anti-Arab violence and placed on the U.S. terror watchlist. Yet somehow this doesn’t stop liberal Jews from associating with individuals and institutions that fete obnoxious and racist Israeli politicians, be it their local elected officials, Jewish federations or Hillel chapters. Indeed, when such repugnant and polarizing figures appear on American college campuses and are met with vibrant protest, liberal Jews wring their hands over the “hostile environment created for Jewish students.”

We shouldn’t have a double standard for people who fraternize with bigots, whether inside or outside of our community. Neither Trump, nor Farrakhan, nor a member of Knesset’s hate should be tolerated and the rules should apply equally, just as many liberal Jews have asserted in op-ed upon op-ed.

But while that may be ideal, it also completely ignores that the rules never apply equally to black people and other marginalized communities because the rules were written to disenfranchise them. One needn’t infantilize minorities, rob them of agency nor lower one’s expectations to recognize the disparities in power. The Torah says to judge rich and poor by the same measure, but our society has entirely different measures for black and white, male and female, gay and straight, cis and trans, and above all rich and poor. How can you demand we hold the disenfranchised to the same standards as the wholly enfranchised, empowered and in-control? And how can you demand they do that which you’re unwilling to do in your own community?

Jewish liberals insist that their Zionism be accepted and not be held to account for the offensive associations or troubling policies of other Zionists. But they’re not willing to extend the same courtesy to their would-be allies.

It’s a cliche but people are human beings and they have warts. If we expect purity and perfection from everyone all the time, we’ll never get anywhere. That doesn’t ever mean accepting bigotry from anyone. But it does mean forgiving people for having complicated relationships to things that sometimes have ugly sides to them  —  particularly when you’re asking for the same forgiveness.

The day my mom’s birthright citizenship is called into doubt, I know that Linda Sarsour will be there to have my back and to stand with me and my family against the full power of the state, because Linda Sarsour is my ally and committed to all minorities coming together as one united front against white supremacy, no matter what intemperate thing she has to say about Israel nor how receptive she is to the Nation of Islam.

Sadly, I have zero confidence that liberal Jews will be there alongside us.

(Daniel Sieradski is a writer, activist and web technologist with over 20 years of experience working with Jewish organizations on their websites and content strategies. He is the former director of digital media for JTA.)