Linda Sarsour apologizes to Jewish members of the Women’s March 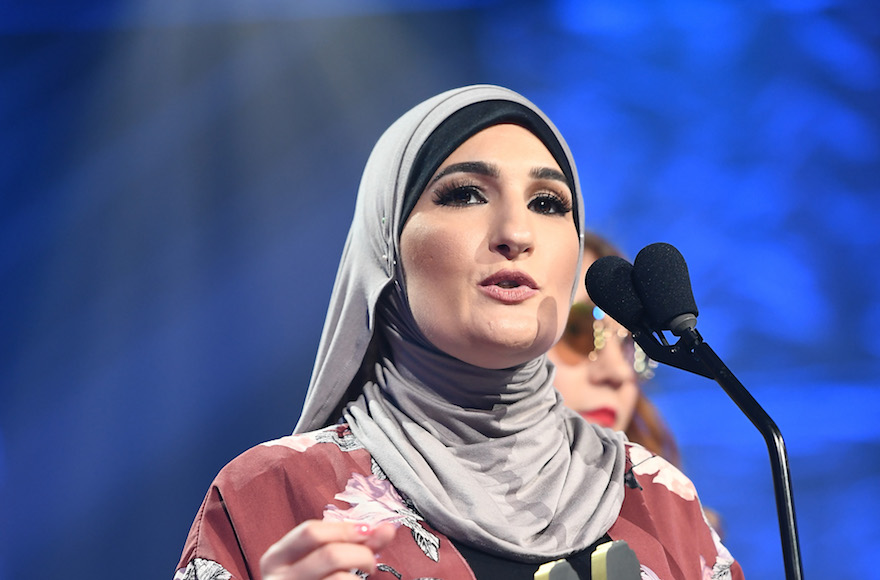 (JTA) — Linda Sarsour released a statement apologizing on behalf of the Women’s March for causing harm to the movement’s Jewish members and for being too slow to show its commitment to fighting anti-Semitism.

“We should have been faster and clearer in helping people understand our values and our commitment to fighting anti-semitism. We regret that,” the statement issued Tuesday afternoon said. “Every member of our movement matters to us — including our incredible Jewish and LGBTQ members. We are deeply sorry for the harm we have caused, but we see you, we love you, and we are fighting with you.”

The Women’s March organized mass protests against President Donald Trump in January 2017 and has since been a leading liberal activist group working on behalf of women’s empowerment.

The organization has come under renewed fire recently for co-chair Tamika Mallory’s associations with Louis Farrakhan, the virulently anti-Semitic leader of the Nation of Islam.

In February, Mallory posted a photo of herself with Farrakhan after he gave a speech laced with anti-Semitic statements. Following an outcry over the incident, the Women’s March released a statement saying “Minister Farrakhan’s statements about Jewish, queer, and trans people are not aligned with the Women’s March Unity Principles.”

The controversy bubbled up again recently when actress Alyssa Milano said she would not speak at next year’s Women’s March because she felt that they had not adequately addressed anti-Semitism. On Monday, Women’s March co-founder Teresa Shook called on the movement’s current organizers to step down because they have “allowed anti-Semitism.”

In her statement Tuesday, Sarsour said the group wants to have a better relationship with the Jewish community.

“Trying to dismantle oppression, while working within systems of oppression, is hard,” Sarsour wrote. “We are deeply invested in building better and deeper relationships with the Jewish community. And we’re committed to deepening relationships with any community who has felt left out of this movement. We want to create space where all are welcome.”

The statement strikes somewhat of a different tone from one Sarsour published Monday in which she again distanced the group from Farrakhan, but also suggested that criticism of the Women’s March was a deflection from focusing on anti-Semitism from the far right. She said the underlying reason people criticize her is not because of associations with Farrakhan but because she is a Palestinian American.

“It’s very clear to me what the underlying issue is — I am a bold, outspoken BDS supporting Palestinian Muslim American woman and the opposition’s worst nightmare,” she wrote. “They have tried every tactic at their disposal to undermine me, discredit me, vilify me but my roots are too deep and my work is too clear and they have not succeeded so by proxy they began attacking my sister Tamika Mallory — knowing all too well that in this country the most discardable woman is a Black woman.”

Sarsour has been a polarizing figure to American Jews. Some on the right and center point to her anti-Zionist activism. This week, the American Jewish Committee condemned her for criticizing “folks who masquerade as progressives but always choose their allegiance to Israel over their commitment to democracy and free speech,” saying it echoed the historical smear that Jews have dual loyalty.

But some progressive Jews have worked with Sarsour and defended her from charges of anti-Semitism. They point to her fundraising for the funerals of victims of the Pittsburgh synagogue shooting, as well as her raising funds on behalf of a vandalized Jewish cemetery.

On Tuesday night, soon after posting the apology, Sarsour posted a defiant statement praising the Women’s March on Facebook.

“Don’t let people who have not contributed nor put their bodies on the line define this moment,” she wrote, referencing Shook and other critics. “T]hose who understand that we are all vulnerable under a fascist Administration will define this moment. We will win together. We will write history together. It will be a messy history full of trials and tribulations, hurt and pain but with the consistent understanding that people are counting on us.”