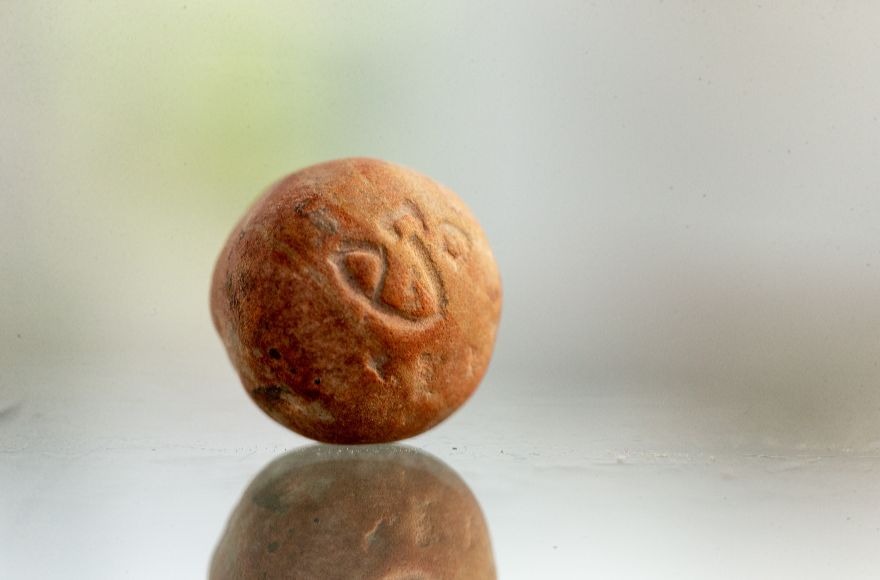 A stone weight likely used in the First Temple to evaluate the half-shekel donation brought by the Jewish people for both the maintenance of the Temple and as a census,was discovered during the sifting of earth from the foundation stones of the Western Wall. (Eliyahu Yanai/City of David)
Advertisement

JERUSALEM (JTA) — A stone weight likely used to weigh silver donations to the First Temple in Jerusalem was uncovered in earth from the foundation stones of the Western Wall.

The tiny stone weight engraved with ancient Hebrew letters was found during the sifting of archaeological soil in the Emek Tzurim National Park, under the auspices of the City of David Foundation.

The weight is called a Beka. It is the second beka found in soil taken from the foundations of Robinson’s Arch at the Western Wall.

The Beka weight was used to evaluate the half-shekel donation in the form of silver ingot brought by the Jewish people for both the maintenance of the Temple and as a census for all males over the age of 20. Such a national census is described in the biblical Book of Exodus.

The weight is inscribed in a mirror image, which may have been an error on the part of the beka maker, according to Archaeologist Eli Shukron, who directed the excavations on behalf of the Israel Antiquities Authority,

“This three thousand-year-old Beka weight, inscribed with ancient Hebrew was likely used in the First Temple, anchoring once again, the deep historical connection of the Jewish People to Jerusalem. It is a reminder from our ancestors in First Temple times telling us that the State of Israel of today does not rest only on a 70-year-old United Nation’s vote, but rather, rests upon a foundation that began more than three millennia ago,” Doron Spielman, vice president of the City of David Foundation, said in a statement.

The sifting project is under the auspices of the City of David Foundation, together with the Israel Nature and Parks Authority. The public can come and sift soil without the need for prior knowledge. Trained archaelogists are on hand to evaluate discovered artifacts. Among the artifacts discovered in this project are King Hezekiah’s seal, coins from various periods of Jerusalem, arrowheads, pottery and jewelry.