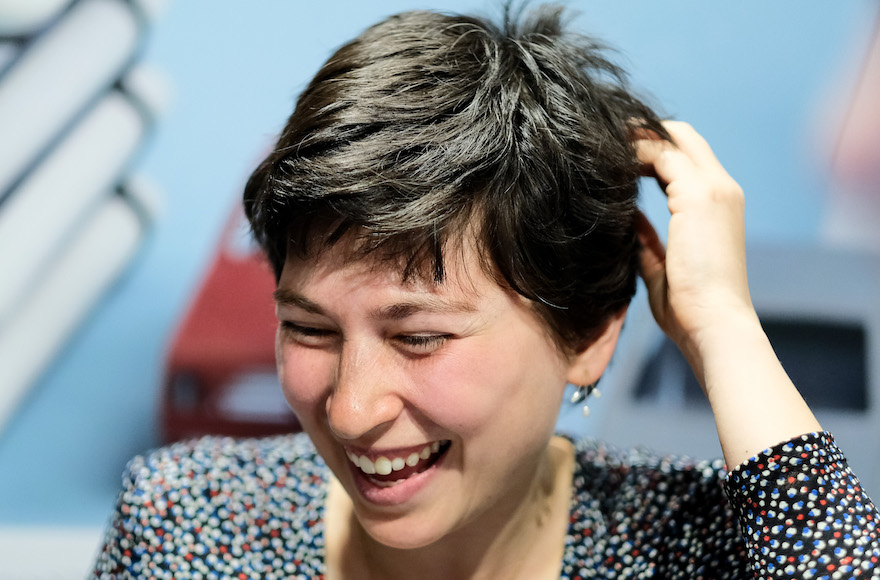 NEW YORK (JTA) — Liana Finck is in the eating area of a grocery store in Southampton, New York, and I’ve interrupted her beach excursion. Once a week, the Brooklyn-based illustrator rides a train to the east end of Long Island to channel her creative energy. She wakes up at 6:30 in the morning to catch that train and stays until the afternoon. Each year she picks a different beach.

“I think of the big picture of what I’m working on, and it’s for some reason the only time in the week when I get to really assess what I’m doing,” Finck tells me over the phone.

Due to a miscommunication, this interview ends up being scheduled precisely on her beach day, so she’s talking to me instead of working. I offer to reschedule several times, feeling guilty about impinging on her creative process, but she reassures me that it’s fine.

Finck, 32, has risen to fame in recent years through her clever cartoons and illustrated “Dear Pepper” advice column — named after her childhood dog — in The New Yorker. Her drawings, which she also posts on Instagram, poke fun at everyday awkward moments and annoyances, such as trying to get an automatic faucet to turn on and only wanting to hang out with the people who don’t actually want to hang out with you. Her drawing style is simple and disarming. With a few jagged strokes she manages to capture a relatable feeling of discomfort in her character’s faces.

Finck has been drawing ever since she can remember.

“I was really shy, so drawing was how I expressed myself, and there was always a lot I wanted to say. I made fun of teachers and drew funny animals,” she says.

As she grew older, something shifted.

“I felt like I didn’t deserve to draw unless I could make something that strangers wanted to pay money for and editors would like,” she says. “So from the time I was a teenager, I started making things much more elaborate and polished, and with that came writer’s block.”

Apparently she has overcome her block. In addition to her frequent work for The New Yorker, Finck is the author, in 2014, of “A Bintel Brief: Love and Longing in Old New York,“an adaptation of the famed Yiddish advice column that appeared in the Forward. The book dramatizes stories of recent immigrants from Eastern Europe who wrote Forward editor Abraham Cahan asking for advice on how to live in their new country.

Her latest book, “Passing for Human,” is more personal, a “graphic memoir” in which she focuses on the experiences of the women in her family. In the whimsical yet serious memoir, each woman is born with a shadow that guides her life. But as they age they eventually lose the shadow. The book, published in September, features a main character, Leola, who looks for her own shadow and the shadows of her female relatives.

“It’s half about me and half about my mom, and the thing we have in common is that we are women and we are artists, so that’s what it’s about,” she says.

In the book, Finck draws on plenty of Jewish inspiration — ancient and modern.

At one point, she retells the biblical creation story, but her version features a female God and devil (who is good rather than evil). Though the Jewish immigration experience isn’t central to “Passing for Human,” the main character’s great-grandmother is from Russia, but lost her shadow when she moved to the United States.

Finck grew up in Chester, a town in Orange County about an hour north of Manhattan. She attended a Conservative synagogue and a Solomon Schechter day school. As a teen, she says she was “a pretty weird and awkward person,” and felt like an outsider at her Jewish school.

“The school was pretty suburban and small, and even if some individual people were my kind of people, the overall culture was so strongly mall shopping and not intellectual and so not shy,” she recalls.

She has yet to find a Jewish community that feels like home, but her faith continues to play a major role in her identity.

“I didn’t leave Judaism, but I did leave the community I grew up in,” she says.

After high school she studied fine art and graphic design at Cooper Union College and traveled to Belgium on a Fulbright fellowship. She received a Six Points Fellowship for Emerging Jewish Artists and contributed to the Forward and Tablet.

Her current style, which she describes as “very messy, very quick,” is a reaction against the more put-together style she adopted in her teens.

“I make my stuff almost aggressively simple in order to trick the writer’s block and the second guessing,” Finck says.

There are other deliberate choices in her drawing, too. One recent cartoon labeled “default” shows a neutral face, no more than two dots for eyes and a line for a smile. Next to it is the same face, labeled “female,” with long hair and lots of makeup. It’s a comment on the kind of clichéd representations of women in drawing that Finck tries to avoid.

As Finck has gained fans — her Instagram account has over 200,000 followers — she finds that the people close to her are watching.

Finck often takes inspiration from her real-life relationships, but alters the details to get at a specific feeling.

“I’ll try to refine it into its purest form and then put it into a drawing,” she says.

She once drew a cartoon that featured a dachshund, and a man with whom she had gone on a date became convinced that it was inspired by him. He claimed that he had told her a story about the dog breed on their date, but Finck remembered no such thing.

As our conversation draws to a close, it’s time for Finck to resume her creative time at the beach. She only has a few hours left before the last train back to New York, and I don’t want to keep her away from her work.

A week later, as I start working on this article, I find myself scanning her Instagram wondering if anything I said may have inspired a cartoon. There’s one cartoon in which a woman talks on the phone with a robot — did I come across as too robotic?

But quickly I realize I’m becoming one of those people who study Finck’s work too closely, hoping to see a trace of themselves in it. I close the browser and start writing.