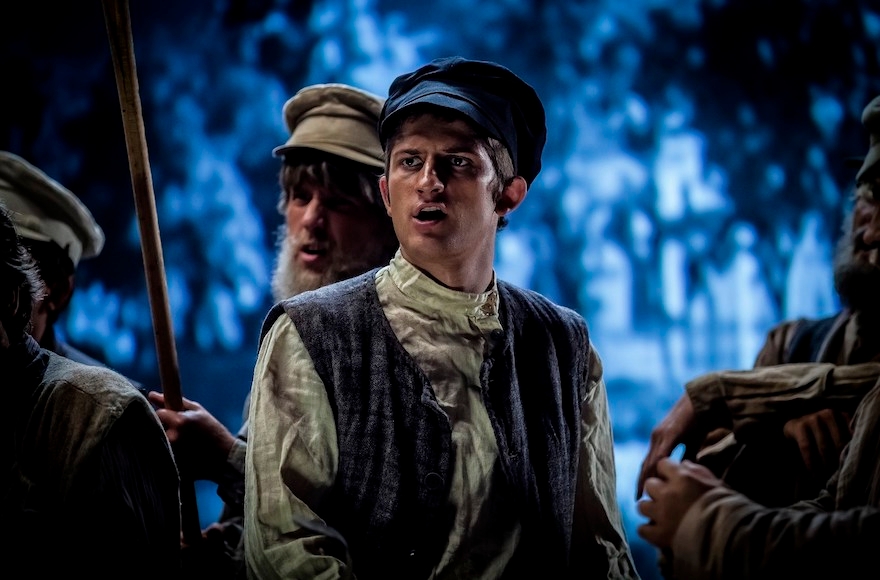 A scene from the new three-part documentary series about Russian Jewish history. (Courtesy of GPG)
Advertisement

In 1894, a Jewish military officer in France, Alfred Dreyfus, was sentenced to life imprisonment for treason for allegedly passing state secrets to the enemy.

When evidence came to light proving his innocence, the government covered it up and slapped the accused with additional charges based on falsified evidence. Dreyfus was tried again and found guilty, framed for no other reason than the fact that he was a Jew. Years passed before he was finally retried, pardoned and his name cleared.

Today, the incident that came to be known as the Dreyfus Affair stands as a famous case of anti-Semitism.

Not long after — in a case that bears striking similarities to Dreyfus’ but is far less well-known in the United States — Menachem Beilis was tried in Ukraine for murdering a 13-year-old boy. That case also bore the stain of anti-Semitism, including the charge that Beilis had killed the child for Jewish ritual purposes.

The Beilis case is recounted in dramatic fashion in an epic three-part documentary called “Russian Jews” rel=”sponsored” that the film’s funder, Genesis Philanthropy Group, hopes will revive interest in Russian Jewish history after decades of suppression under communism.

“Many Russian-speaking Jews are not well versed in their own history,” said Mikhail Fridman, a co-founder and board member of the Genesis Philanthropy Group. “This film aims both to document that history and spark an ongoing conversation about the unique contributions of Russian Jews.”

Even decades after the fall of the Soviet Union, many Russian-speaking Jews do not know that history.

“For 70 years, the Soviet regime tried to do everything in its power to strip its Jewish citizens of pride in their heritage and of their connection to the Jewish narrative,” said Ilia Salita, president and CEO of the Genesis Philanthropy Group. “Such an effort has had a long-lasting effect. Therefore it should come as no surprise to anyone that the contributions of Russian-speaking Jews are not known well, and quite often are not attributed correctly either.”

The film corrects for this tendency in part by eschewing broad historical narrative in favor of short vignettes of prominent figures and significant episodes in Russian Jewish history, from medieval times through the fall of communism.

Narrated by Leonid Parfenov, Russia’s preeminent television journalist and the creator of more than a dozen TV documentaries about Russian history, the documentary covers a vast stretch of history, though its content is heavily weighted toward the 20th century. 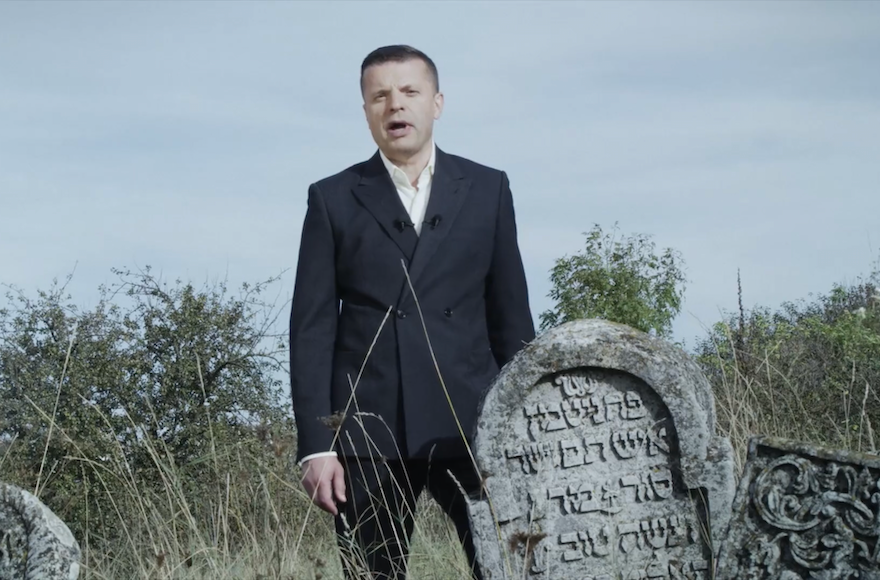 Eight centuries are covered in the first 20 minutes of the first film, while the second film covers just three decades: from the aftermath of the 1917 revolution until the 1948 murder of Solomon Mikhoels, a prominent Jewish actor and leader of the Jewish Anti-Fascist Committee who was killed on Stalin’s orders. The third installment covers from 1948 until the collapse of the Soviet Union in 1991.

Given the lack of archival film footage for much of the period under discussion, filmmakers resorted to some innovative storytelling techniques. One method used repeatedly in the film is animating historic photographs of key figures while an actor speaks the words of their writings or speeches.

“Our computer graphics artist cut out a face from a historic portrait and put it onto an actor’s face like a mask, then merged this mask with the actor’s facial expressions and voila – the photograph is alive,” said Sergey Nurmamed, the film’s director and Parfenov’s longtime collaborator. “This is how we made an impression of Lenin, Trotsky, Stalin and other well-known figures delivering their speeches as if they were shot on camera a long time ago.”

The nearly six-hour documentary, which is available with English and Hebrew subtitles, presents Russian Jewish history as one of breathtaking accomplishment achieved despite the systematic denial of full Jewish civil rights — and often outright oppression.

Prior to the revolution, Jews were largely confined to shtetls in the Pale of Settlement, but some — like the Brodsky brothers, successful 19th-century sugar magnates who founded schools, hospitals and arts institutions — still managed to achieve wealth and influence.

In the new world the Bolsheviks sought to build, ideological commitment — not ethnic origins — were of paramount concern. Lenin described Trotsky’s Jewish origins as “trifles” that should not obstruct his rise in the hierarchy.

In what can be seen as evidence of the depth of Jewish assimilation in the period following the revolution, Jews often were on opposite sides of various internal battles. It was Nahum Eitingon, a Belarussian Jew, who plotted Trotsky’s assassination in Mexico.

“Least of all did Eitingon think that he, a Jew, would send assassins to kill another Jew,” Parfenov says in the film as he strolls the streets around the Mexico City house where Trotsky was murdered. “No, he thought of himself as a Soviet patriot carrying out a Soviet mission to eliminate a vicious enemy of the USSR and a personal enemy of Stalin.”

All this began to change as Stalin drew closer to Hitler (before they turned on each other in 1941) and collapsed entirely in the postwar era. People who were identified by their state documents as Jews, which was required by a new law, again were considered suspect by the government and the public at large. As a result, Jews again emerged as some of the foremost opponents of the country’s regime, this time leading the anti-Soviet movement. 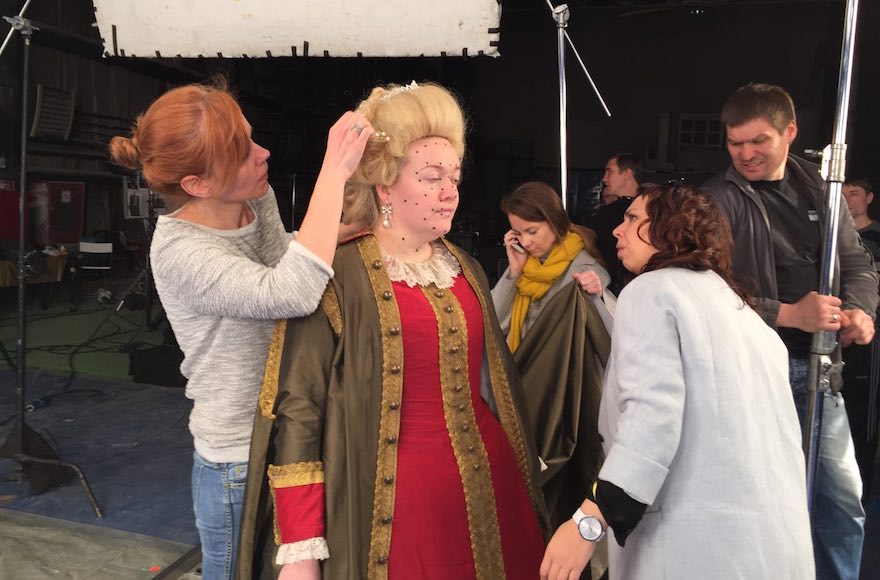 Given the lack of archival film footage for much of the period covered by the documentary, filmmakers animated historic photographs of key figures using innovative graphics techniques and actors. (Courtesy of Studio Namdeni)

Salita says one of the Genesis Philanthropy Group’s two goals for the film already has been met: having it seen by as many people as possible. According to Salita, the film broke documentary box office records in Russia, where it was released in theaters, and racked up approximately 4 million views between the organization’s YouTube channel and Parfenov’s channel, Parfenon. The English-subtitled version is also available on YouTube.

Beyond the box office, Salita hopes the film will serve as an enduring documentary that will inspire future generations of Russian Jews to take pride in their unique heritage and the prominent Jewish role in Russian history.

“It’s our hope and expectation that the film will continue to live and evoke interest in the topic,” Salita said, “provoking conversation about the complexity of the community and its contribution to the Jewish world and humanity at large.”

This article was sponsored by and produced in partnership with Genesis Philanthropy Group [GPG], a global foundation founded by Mikhail Fridman and his partners. GPG focuses its philanthropic work on strengthening Jewish identity among Russian-speaking Jews. This story was produced by JTA’s native content team.