Rand Paul: Aid to Israel should be ‘limited in time and scope’ 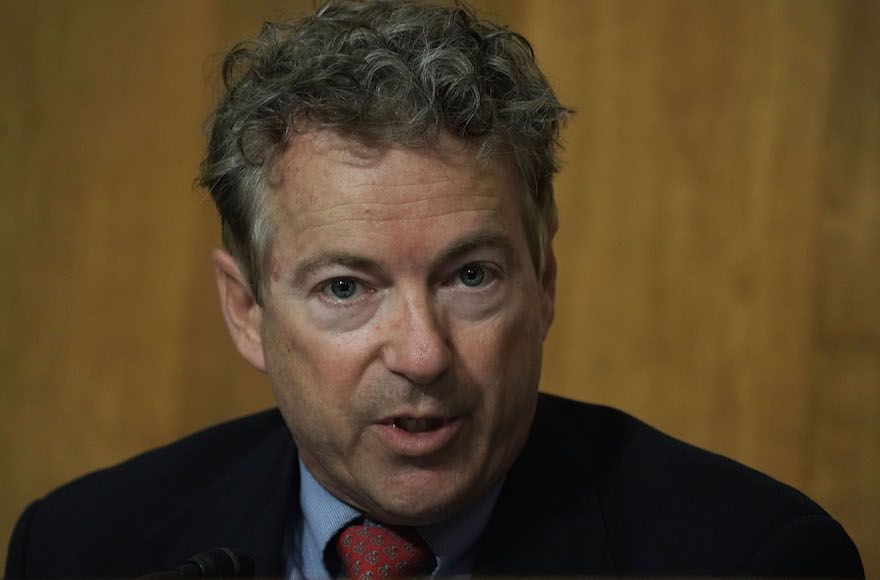 WASHINGTON (JTA) — Sen. Rand Paul acknowledged that he had placed a hold on major funding legislation for Israel, saying he wanted time limits on assistance to the Jewish state.

The Kentucky Republican also said he wanted cuts in aid to countries he says are hostile to the United States.

“While I’m not for foreign aid in general, if we are going to send aid to Israel it should be limited in time and scope so we aren’t doing it forever, and it should be paid for by cutting the aid to people who hate Israel and America,” Paul’s office said in an statement emailed Tuesday to the media.

Paul said he planned to introduce an amendment to the legislation, the United States-Israel Security Assistance Authorization Act of 2018, in coming days. The bill codifies into law the $38 billion defense aid package for Israel over 10 years that was negotiated in the final days of the Obama administration.

The Washington Free Beacon first reported Paul’s hold, a parliamentary procedure that allows senators to prevent a motion from reaching a floor vote, and which usually is anonymous. The hold has been countered vigorously by major pro-Israel groups, including the American Israel Public Affairs Committee and Christians United for Israel, through online ads and action alerts to membership. CUFI has specifically targeted Paul through actions in Kentucky, including ads in newspapers there.

In his statement, Paul blamed AIPAC and other unnamed pro-Israel groups for not meeting his demands.

“Each time I’ve tried to stop giving aid to enemies of the U.S. and Israel, I have been thwarted. Often by groups that claim they are pro-Israel,” he said. “Why would supposedly pro-Israel groups oppose my legislation to end aid to the Palestinian Liberation Organization? Maybe it’s because they fear any debate on anyone’s foreign aid threatens a broader debate on whether we should be borrowing from foreign countries simply to send the money to other foreign countries.”

AIPAC has in the past opposed radical cuts to the Palestinians, heeding in part Israeli security officials who say the assistance helps stabilize the region. Israeli Prime Minister Benjamin Netanyahu has recently endorsed President Donald Trump’s wide-reaching cuts in assistance to the Palestinians. It is not clear yet whether AIPAC is on board with the cuts as well.

AIPAC also vigorously advocates for foreign assistance in general, which Paul opposes. The lobby believes broader foreign assistance is critical because it advances U.S. influence generally and builds support for Israel overseas, and because making Israel a special case while other countries are neglected does Israel no favors.

Asked about Paul’s claims, AIPAC’s spokesman, Marshall Wittman, would only say, “We believe it is critical for Congress to adopt this legislation before adjourning given the growing threats to Israel’s security from Iran, Hezbollah and Hamas.”

CUFI noted in its statement that it has supported cuts to assistance to the Palestinians, and said the argument over those cuts were not germane to aid to Israel bill.

“Sen. Paul’s decision to hold this bill does not make America safer and does not ensure taxpayer dollars are used most efficiently – quite the opposite,” said CUFI Action Fund Chairwoman Sandra Parker. “Aid to Israel provides the U.S. with an extraordinary return on investment.”

The Senate passed the act in early August and the House of Representatives followed suit the following month. Now the Senate must pass a final version in line with the bill passed by the House.