A conference for Israeli Americans pays tribute to Pittsburgh 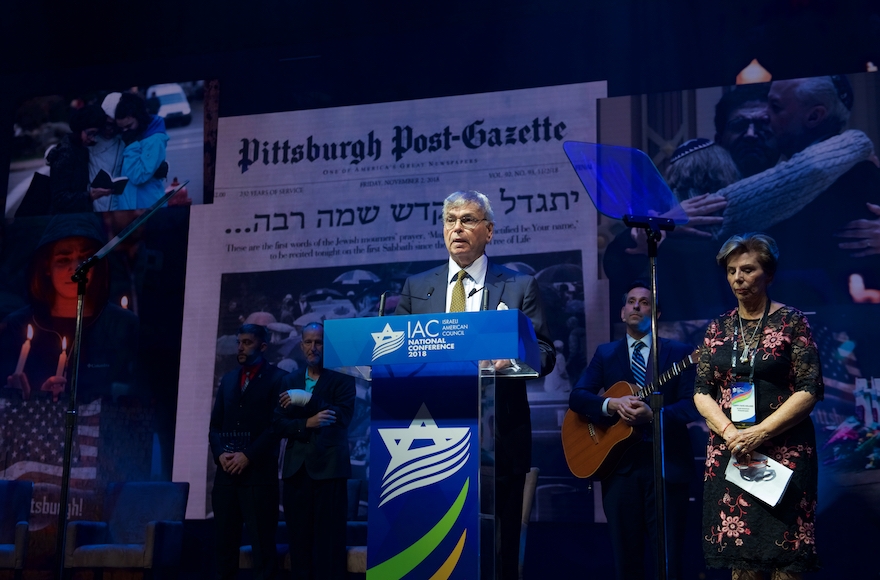 Rabbi Alvin Berkun, rabbi emeritus of The Tree of Life/Ohr Kodesh congregation in Pittsburgh, and Tzippy Holland, a Holocaust survivor, join at the Israeli American Council conference in a tribute to the police who stopped the massacre at a Pittsburgh synagogue, Nov. 29 2018. (IAC)
Advertisement

HOLLYWOOD, Fla. (JTA) — The Israeli American Council launched its annual conference with a tribute to the police officers who stopped last month’s massacre at a Pittsburgh synagogue.

At the same time, speakers made an impassioned plea to support Israel.

“I never thought that in my lifetime I would worry again about being a Jew,” Tzippy Holand, a Holocaust survivor, Israeli-American philanthropist and IAC Council member in Florida said Thursday in presenting an award to two Pittsburgh police officers, Michael Smidga and Daniel Mead. “If we don’t do everything we can to support Israel, we are not going to have a home we are not going to have where to escape to.”

Alvin Berkun, the rabbi emeritus of The Tree Of Life/Ohr Kodesh congregation, one of three in the complex where a gunman murdered 11 worshippers on Oct. 27, delivered a blessing for those who place their lives on the line for others, in Pittsburgh and in Israel.

“Thank you, God, for making them agents of your ‘sukkat shalom,’ your shelter of peace,” he said at the conference being held at a coastal resort here.

In the aftermath of the Pittsburgh massacre, it was jarring for American Jewish leaders when Naftali Bennett, the Israeli minister for the Diaspora, invoked attacks on Israelis at a memorial and Ron Dermer, the Israeli ambassador to Washington, assumed a high profile. After all, Israel wasn’t a factor in the shooting: The attacker was driven by his belief that Jews were behind the efforts of Central American refugees to seek asylum in the United States, a quest he saw as a lethal threat.

But for this crowd of about 3,000 Israeli Americans from across the country, the line between the worst anti-Semitic attack in U.S. history and preserving the Jewish state was a natural one.

The packed ballroom at the Diplomat joined in singing “Gesher Tzar Meod,” “A Very Narrow Bridge,” the prayer by Nachman of Breslov, the 18th-century Hasidic rabbi that has become an anthem for Israelis during crises. Among those swaying and singing in defiant triumph was Miriam Adelson, the Israeli American who with her husband, Sheldon Adelson, the casino magnate and Republican kingmaker, is a major funder of the IAC.

The Pittsburgh tribute was preceded by a speech by Israel Prize laureate Miriam Peretz, who lost two sons to battles and has made it her mission to work with the bereaved.

“Reform, Orthodox, secular, left and right,” Peretz said. “The land of Israel is the home of all the Jewish people.”

The opening also marked 71 years since the United Nations voted on Nov. 29 1947, to recognize Israel. A major feature of the opening night and of the conference itself are Israeli technological innovations.