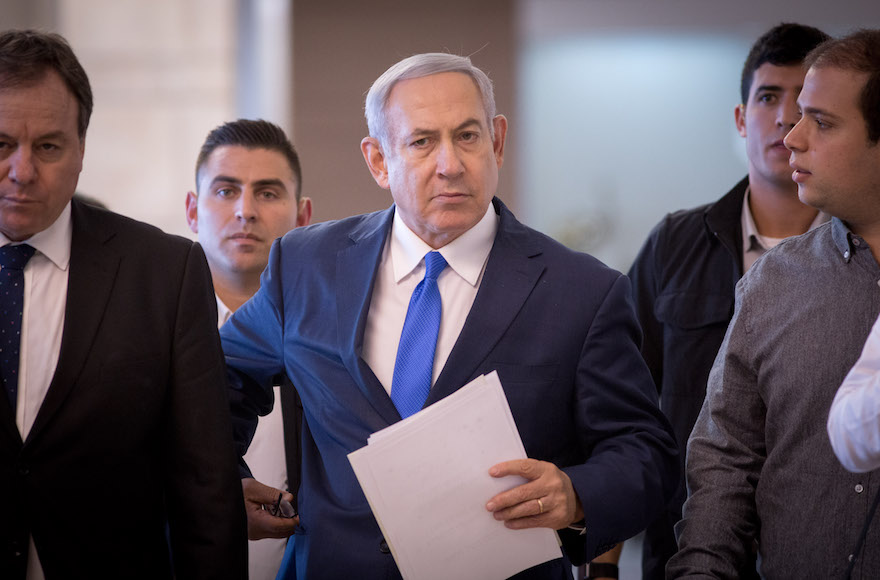 JERUSALEM (JTA) — The Israel Police have recommended bribery charges and other corruption charges against Prime Minister Benjamin Netanyahu and his wife, Sara, in the so-called Case 4000.

The police made its announcement on Sunday. It is the third case in which the police have recommended charges against the prime minister. The case now goes to Israel’s attorney general to decide whether to file charges.

Case 4000 alleges that Shaul Elovitch, majority shareholder of Bezeq, received political favors for the Israeli telecommunications giant in return for favorable coverage of Netanyahu on the Walla! news website owned by the company. Netanyahu was acting communications minister at the time of some of the alleged deals.

The police on Sunday also recommended bribery and other corruption charges against Elovitch and his wife, Iris.

“The main suspicion is that the prime minister took bribes and acted in a conflict of interest by intervening and acting in regulatory decisions that favor Shaul Elovitch and the Bezeq Group, while at the same time directly and indirectly demanded interference with the content of the Walla site in a way that would benefit him,” the Israel Police said in a statement issued jointly with the Israel Securities Authority, which also participated in the investigation.

The police have previously recommended charging Prime Minister Netanyahu with bribery and breach of trust in two other cases: Case 1000, in which he allegedly received expensive gifts from supporters in return for advancing their interests, including expensive cigars and champagne from the Israeli-born Hollywood producer Arnon Milchan; and Case 2000, in which he is alleged to have conspired with Arnon Mozes, the owner of the Israeli daily Yediot Acharonot, to advance legislation hobbling the free and pro-Netanyahu tabloid Israel Hayom bankrolled by Jewish American billionaire Sheldon Adelson.

Opposition leader Tzipi Livni, and the heads of other opposition parties called on Netanyahu to resign.