When George H.W. Bush was reluctant to wear a yarmulke 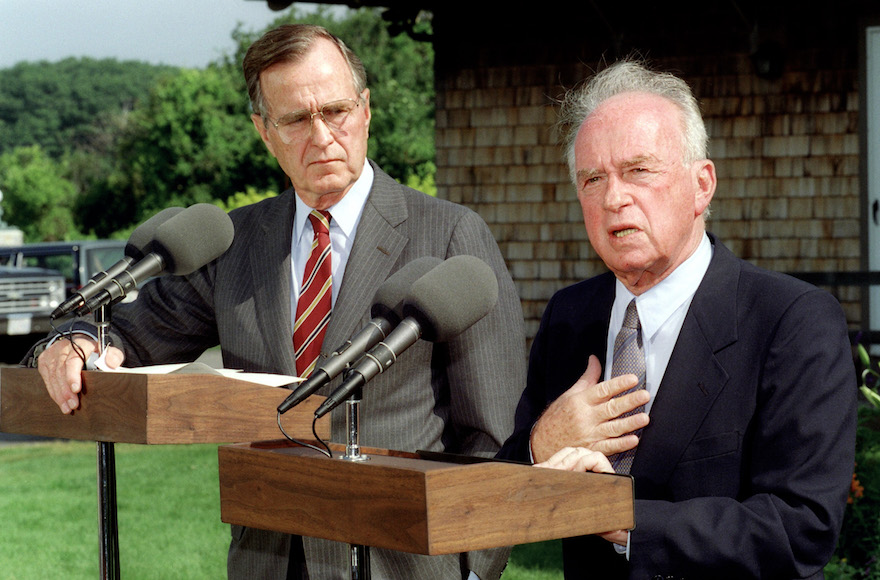 I worked for him for over 10 years, while he was the vice president and then president. My memories could fill a book (or at least a chapter of one). Being out of politics, I no longer maintain the proverbial “wall of fame” that Washington lawyers have of themselves with famous people. But one of the few photos I have kept was one of Vice President Bush holding my daughter, then 5 months old, lovingly and affectionately. When I learned of his death last week, I walked over to my mantelpiece to commune with it for some minutes.

George H.W. Bush was both a man of principle and action. I remember a small meeting at his residence called at the request of the Israeli ambassador about the deteriorating situation of the Ethiopian Jews still in Africa. A Pentagon official said they were quietly taking three to five Jews out every week on a commercial airplane to Brussels and doubted they could substantially increase the number.

The vice president broke in and pointed out that the premise of the meeting was that the Ethiopians’ situation in Somalia was perilous. The Pentagon official agreed.

If so, Bush asked, why can’t we send in some airplanes and airlift them out all at once? He followed up with a request that a plan be given to me to get this done.

Given that vice presidential directive, the Pentagon thought boldly and brought back a plan that it had first said was impossible. And I will never forget the real emotion in Bush’s voice when he called me from Air Force Two to tell me that the first Ethiopian Jews were coming down the gangplank in a military airport south of Tel Aviv. There was emotion in my voice as well.

George Bush was a religious man, but he always kept his religion private. Unlike many politicians of today, he did not choose to parade his belief to the world. Accompanying Vice President Bush to the dedication in 1984 of a new building for the National Museum of American Jewish Military History here, I brought him six yarmulkes so he could choose one to wear while affixing the building’s mezuzah. He told me he felt uncomfortable doing so in that he felt the Jews present would see him wearing the skullcap and believe he was pandering to them. I was embarrassed to tell him that the Jews wanted to be pandered to and would take it as a sign of disrespect if he didn’t.

He was also a compassionate man. Once when traveling on Air Force One he brought up a mutual acquaintance who he thought had been acting strangely and might be deteriorating mentally. He asked me to alert a relative who might be able to intervene and report back to him if his help was needed.

George Bush had a principled sense of fairness as well, even when it went against the feelings of the Jewish community. He once invited me to a private lunch in his office, where he spread out a map of Jerusalem and asked me to explain each and every Jewish settlement in the city. He saw such settlement as injurious to the peace process, telling me it was as if two parties were negotiating over a quarry and at night one of them entered and removed stones, reducing its value. I tried to explain the attachment of Jews to Jerusalem, but to him it seemed fundamentally unfair to change the status quo while negotiating about it.

For most American Jews, however, his presidency was marked by his intemperate outburst against members of the American Israel Public Affairs Committee lobbying Congress about the U.S. loan guarantees. AIPAC felt the loans to Israel were necessary to assist the absorption of Soviet Jewish immigrants. Bush supported the guarantees but did not want them used to subsidize building in the West Bank. Then-Prime Minister Yitzhak Shamir and AIPAC fought him on it.

After a day of AIPAC lobbying, Bush pushed back.

“I heard today there was something like 1,000 lobbyists on the Hill working on the other side of the question. We’ve got one lonely little guy down here doing it,” he said.

The Jewish community erupted, claiming that Bush was suggesting “dual loyalty” and encouraging anti-Semitism. The atmosphere can only be described as rancid. Bush later told me he regretted the outburst, not because of the policy views it expressed but because he so hated the thought that his remarks might engender anti-Semitism.

Some years later, when he was no longer president, I attended a small dinner party at the Israeli ambassador’s residence. The conversation turned to former President Bush, and the American Jews present spoke of how they reviled him. The Israeli military personnel at the dinner stopped them short. No president, they pointed out, had done more for Israel’s security and its relationship with the U.S. military.

I can speak of much more: of his assistance in getting individual refuseniks out of Russia, of his quiet work in helping Syrian Jewish women leave Syria “to find husbands,” and of his support (through Secretary of State Jim Baker) for the Madrid peace conference, which laid the groundwork for the Oslo accords and the now, on life support, two-state solution.

And this does not even begin to cover the extraordinary diplomacy that helped navigate peacefully the end of the Soviet Union and the grand coalition that successfully led to the liberation of Kuwait from Saddam Hussein. He helped bring abut the reunification of Germany. He fostered a “new world order,” one that led to greater American power in the context of win-win scenarios for all our allies.

For these and other reasons there is no doubt that his memory will be for a blessing.

(Marshall J. Breger is a professor of law at the Columbus School of Law, The Catholic University of America. During the George H.W. Bush administration he served as solicitor of labor, the chief lawyer of the Labor Department. From 1982 to 1984 he served as special assistant to President Reagan and his liaison to the Jewish community.)