This professional Santa Claus is an Orthodox Jew 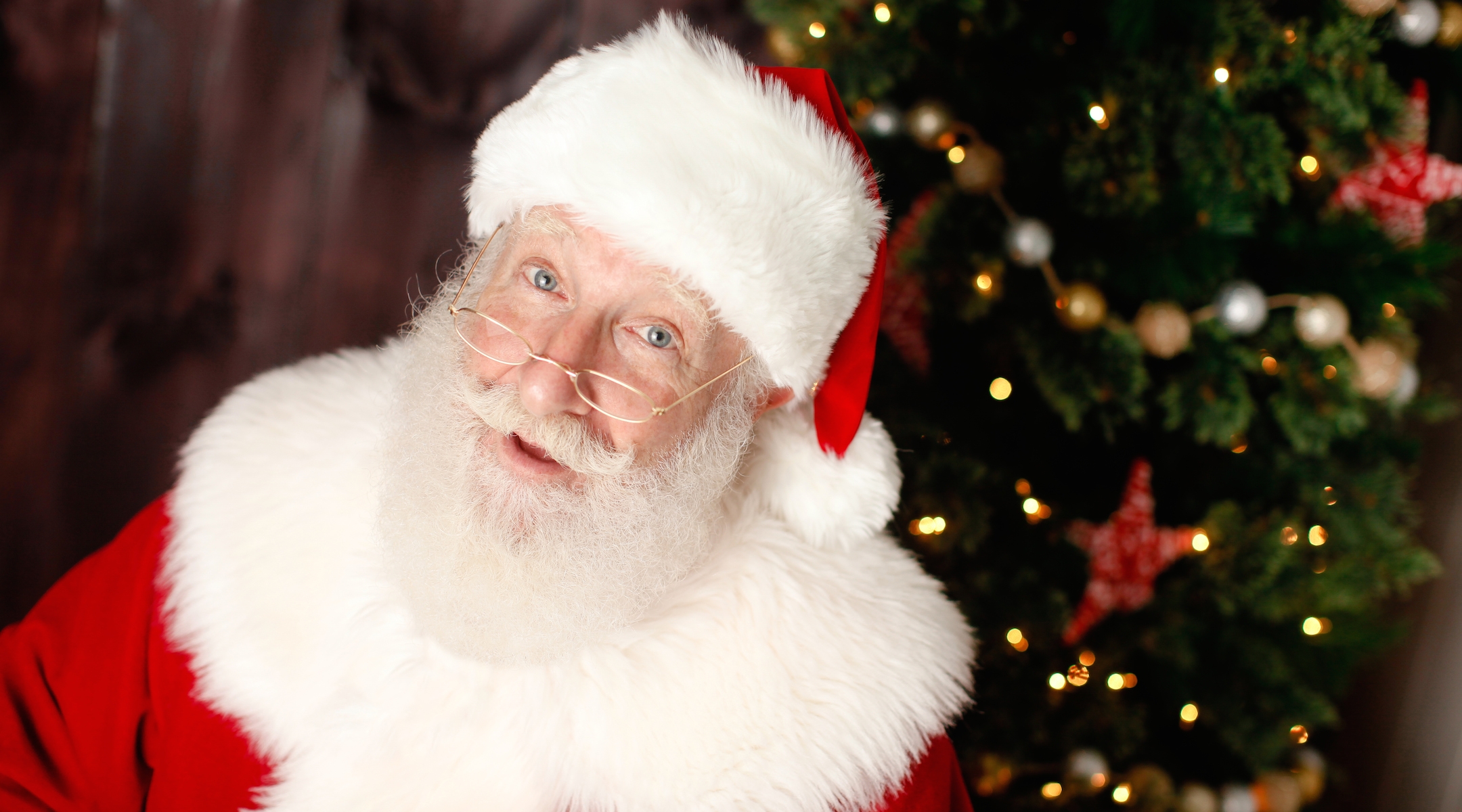 (JTA) — Just like any other Santa Claus, Santa Rick will spend much of the next couple of weeks sitting children on his knee, asking whether they’ve been good and listening to their Christmas wishes.

If it’s a Saturday, he may have slept overnight in the building. And he’ll only accept payment after nightfall.

For Santa Rick’s last name is Rosenthal, and he’s an Orthodox Jew who does not drive or handle money on Shabbat. But that doesn’t stop him from doing his job.

“I don’t know anyone who wouldn’t help a child,” said Rosenthal, 66, who lives in Atlanta and attends Young Israel of Toco Hills. “If you look at the world as children do, that’s a better feeling. I’m a better person and a better Jew because I’m Santa.”

Rosenthal — a full-time, professional Santa — sees no contradiction between serving as the symbol of Christmas and living as an observant Jew. To him, Santa is a nonreligious spiritual figure who provides trust, reassurance and comfort to the young and old.

He says that anyone who is inclined to criticize him for working as a Santa should consider ways they help non-Jews observe holidays — like working a shift on Christmas when Christians take the day off.

“As a Jew, we are to be a light unto the world,” Rosenthal said, paraphrasing a famous Jewish aphorism from the Bible. “That’s one of our jobs. If we can help make people’s lives better, we should do that. It’s a mitzvah. If we can ease tensions between Jews and non-Jews, we can do that.”

Rosenthal began playing Santa at age 16 as a gag. He would dress up and hang mini bagels on his non-Jewish friends’ Christmas trees. He occasionally played the part in subsequent decades.

But he became a full-time Santa seven years ago when two things happened: First, his parents passed away within two weeks of each other, which led him to grow out his beard, a custom of the traditional Jewish 30-day mourning period after a parent’s death. Soon after he was shopping at Home Depot when he noticed that a little boy was staring at him transfixed, sure that he was Santa Claus.

“I knew what he was thinking and I said, ‘Don’t tell anyone you saw Santa buying tools for the elves at Home Depot,’” he said. “He was frozen dead over. I walked into the store, I looked back at the first row and he’s still staring at me.”

Since then, Rosenthal has become Santa year-round. He and his wife, Tracy, run a Santa school, Northern Lights Santa Academy, that hosts three-day weekend seminars on how to be Santa. The school covers everything from fashioning a good costume to making sure you have legal and insurance protection in place. But the seminars also promise fun times, like a Christmas movie screening and a photo op with a live reindeer.

The couple also runs the National Santa Agency, which books a network of 100 Santas, Mrs. Clauses and elves for private parties and events. Rosenthal is a member of the International Brotherhood of Real Bearded Santas.

While his busy season obviously is Christmastime, Rosenthal says there’s business all 12 months. He’ll go to schools, birthday parties, senior homes and trade shows. He did a gig this year in Hong Kong. He’s even taken part in marriage proposals — he gives the woman an engagement ring that she had already selected with her partner.

Rosenthal looks the part. He has a bushy beard, oblong glasses and several Santa suits — including a golf suit (he says his game is unbeatable) and a red-and-white, full-body Santa swimsuit. He curls his mustache every day and uses three kinds of conditioner on his hair and beard. And his demeanor, for lack of a better word, is jolly. Speaking to this reporter, he casually uses the phrase “butcher, baker or candlestick maker.”

Part of what he loves about being Santa, Rosenthal says, is that the Jolly Old Elf has been called the second-most recognizable figure in the world — after Jesus. He said that patients with Alzheimer’s at seniors residences will recognize him even when they can’t recognize their own spouses.

His wife says that even when he’s not in the suit, Rosenthal will wear a red shirt — and frequently be mobbed by kids. Because she doesn’t dress the part of Santa’s wife, Tracy says she will usually keep her distance so kids don’t “think Santa’s stepping out on Mrs. Claus.”

“From a personal perspective, we never are able to go out anywhere in public where he is not recognized as Santa,” she said. “Usually if we go to the store, I know it’s going to take a little bit longer because he’ll be stopped and I’ll usually be waiting for him to be done talking to children.”

Rosenthal says the job can be taxing sometimes because he must be open to the array of human emotions. He says he cries often after talking with people, and recalls an especially painful time when a little boy sat on his lap and asked for a small trampoline for Christmas for his dead brother.

“I have to be jolly; I have to get rid of it,” he said of the job’s emotional burdens. “We have open wounds as Santas. We got shot at all the time in good ways and bad ways.”

But one thing that has not been a challenge, he says, is a Jew playing Santa. He makes clear that he’s not a Christian minister or even St. Nicholas. To his mind, he’s an American Santa who wants to help people.

“Santa is an American cultural thing,” he said. “When I’m Santa, I’m Santa. I’m a spiritual guy who believes in the world being a better place.”