Soviet immigration, once a bane of Germany’s Jews, has become their salvation 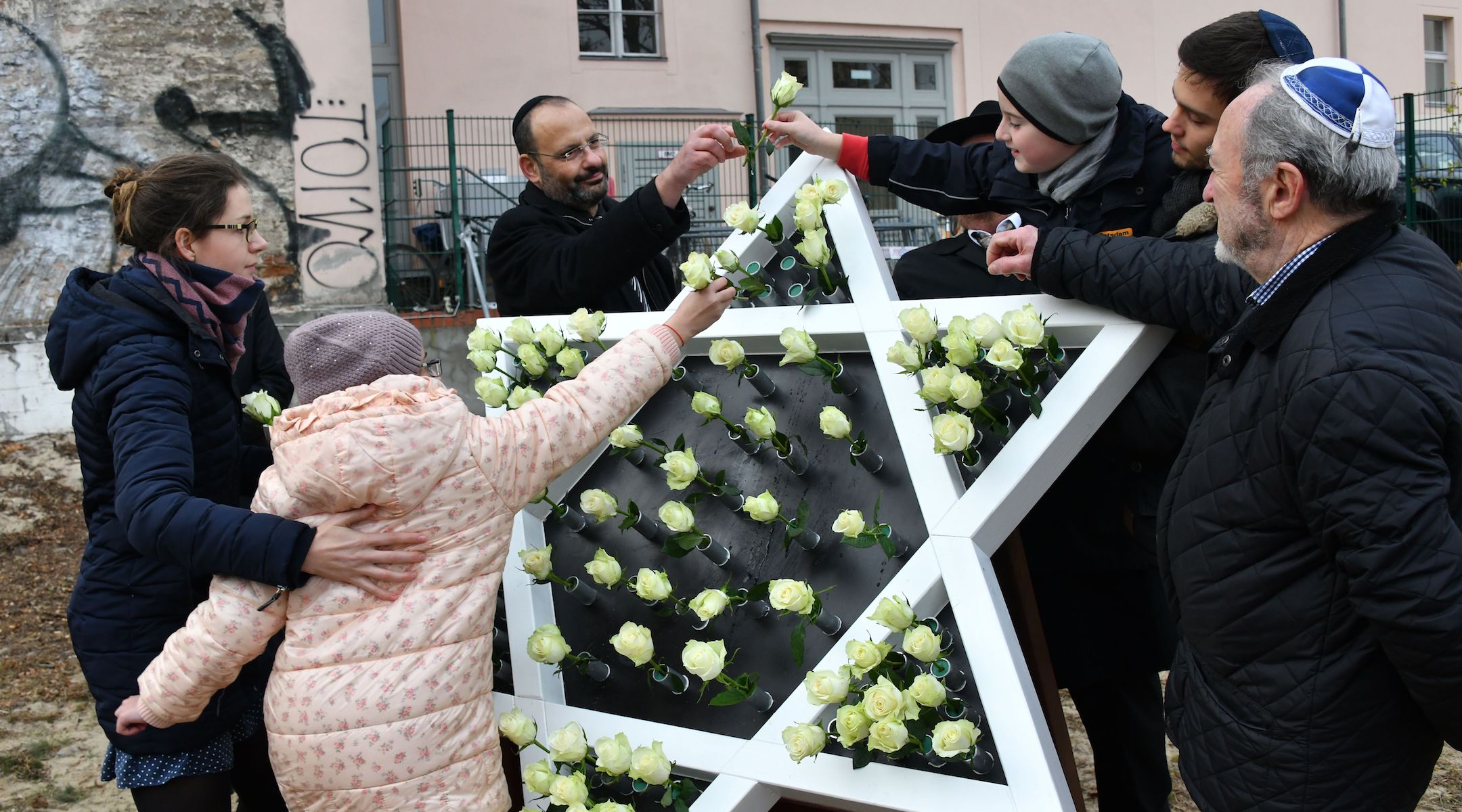 Children stick white roses into a Star of David sculpture at the construction site of a new synagogue in Potsdam, Germany, Nov. 9, 2018, the 80th anniversary of the Nazi Kristallnacht pogrom. (Bernd Settnik/AFP/Getty Images)
Advertisement

MUNICH (JTA) — Weeks after they emigrated from Russia and moved to Germany, the Nedlin family sought to join the local Jewish community.

Registering for membership in a Jewish community — a practice common in European countries — was a significant step for the Nedlins, who before emigrating in 1992 had grown up in the repressive Soviet Union. There they were forced to hide or downplay their Jewish identity due to state anti-Semitism and discrimination against religion.

But the local community didn’t reciprocate the family’s desire for contact.

“At first they told us we can’t join,” Anna Nedlin, who was 5 at the time, recalled in an interview with JTA. “They didn’t want anything to do with us.”  But at her parents’ insistence, “they sent our documents to Frankfurt to check if we’re really Jewish.”

The experience of the Nedlins, who eventually were allowed to join the synagogue, was a typical account of many of the 170,000 Russian speakers who immigrated to Germany following the collapse of the Soviet Union in the early 1990s. The newcomers faced a rift with the 30,000 “postwar” Jews whom many expected to welcome them to Germany.

The split has had a deep, lasting and polarizing effect on a community re-established by Holocaust survivors, distracting at times from the mission of revival. It flares up in local communal politics but, 30 years on, has mostly healed. More often, the Russian-speaking immigrants and their children are credited with energizing and strengthening a minority group whose viability used to be uncertain.

When the post-Soviet immigration began, Jews in Germany suddenly found themselves struggling to cater to large numbers of people with little more than the shirts on their backs. It didn’t help that the newcomers had little knowledge of Judaism and attitudes shaped by decades of living under repressive governments.

Famously, many German Jews were shocked at how some newcomers would take away food that was set out as refreshments for the kiddush ceremony at synagogue.

The postwar community, which was largely descended from recent Eastern European immigrants, would “look upon the Soviet Jews as maybe not even being Jews and being uneducated [yet] taking over their communities,” said Esther Knochenhauer, 34, who was born in East Germany one year after her parents immigrated there from Russia.

Even before the reunification of Germany in 1990, the East German leader Lothar de Maiziere began welcoming Soviet Jews. Helmut Kohl, the former chancellor, adopted the same policy after unification to make amends for and reverse the Nazis’ annihilation of Jewish presence in Germany. Following reunification, immigration requests by Jews were expedited and given equal status to those by ethnic Germans.

The Berlin Jewish community, under its president until 1992, Heinz Galinski, hired dozens of Russian-speaking Jews to help with the absorption of others. And many Jewish communities tried to assist penniless newcomers however they could — including charity.

It made some “wrongly frame” communal politics as “a struggle between Russian speakers in power who do shady things and German-speaking opposition,” according to Sergey Lagodinsky, a Russia-born jurist who has run for leadership roles in the Berlin Jewish community’s elections.

And some dismissed the desire of Russian-speaking Jews for contact with Jewish life as utilitarian, he added. In the European context, joining the community allows a member access to facilities as well as free or subsidized services for weddings, circumcision and b’nai mitzvah. 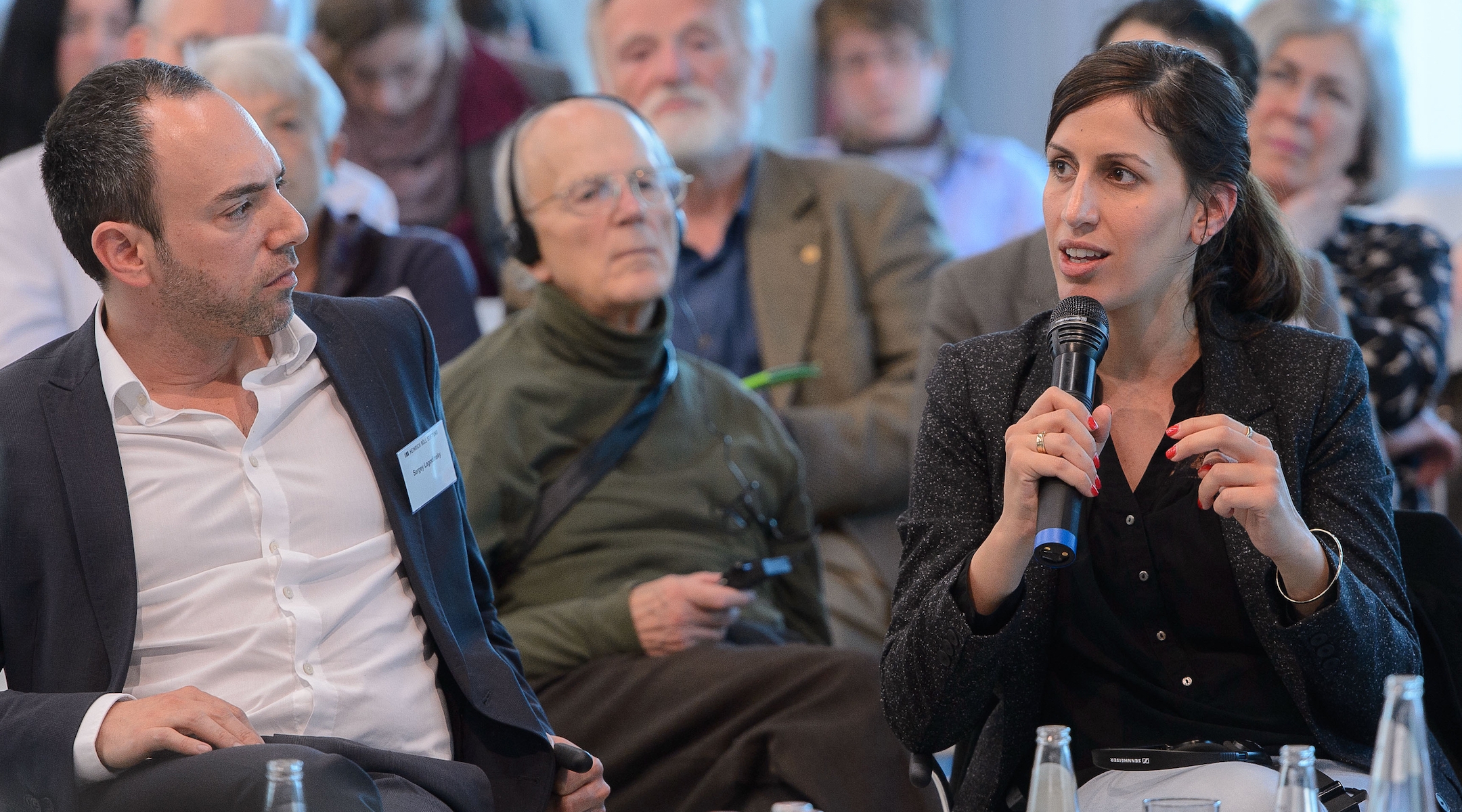 That suggestion was especially insulting to families like Knochenhauer’s. Her mother’s family was so attached to their Jewish identity that they continued holding Passover seder dinners in communist Russia (though, out of caution, they neither read the Haggadah nor told the children what the bizarre dishes and customs were all about, she said).

Yet Nedlin and Knochenhauer’s own life stories reflect their divided community’s ability to transcend the challenges of this culture clash, which ended up becoming the community’s lifeline.

Anna Nedlin was married at a Cologne synagogue to Roni Lehrer, whom she met 10 years ago at the Mahane Jewish camp. The couple, both historians, are expecting their first child.

Lehrer, 30, credits the Russian-speaking influx with more than just continuing his own Jewish family.

“We wouldn’t be around if not for their arrival,” he said. “We would’ve been doomed as a community.”

Lehrer’s mother, he said, joined the Jewish community of Cologne in the early 1980s, when it was “a dwindling group of 1,000 people.” She did not expect Jewish life to survive in Cologne, planning to move to Israel at some point so that her children would grow up with Judaism, her son said. But a decade later, “we’re a community of 5,500 people.”

This resulted in the 2002 re-establishment of a Jewish school in Cologne, the Lauder Morijah School, and the opening of other Jewish institutions. Two-thirds of the 60 counselors trained annually by the community for youth work in Cologne, Lehrer said, come from Jewish homes with at least one Russian-speaking parent.

Language and food differences are some of the minor issues younger mixed couples can expect, according to Knochenhauer’s Berlin-born husband, who asked not to be identified by name in the article. (Knochenhauer said his preference for keeping a low profile was typical of postwar Jews, and one of the things that sets them apart from Russian speakers who “won’t stay silent.”)

Her family “makes enough food for an army, which always makes me wonder just how many people they plan on hosting,” Knochenhauer’s husband said. But these minor differences are not comparable to the challenges of interfaith marriages with partners from very different cultures, Knochenhauer said.

Still, the arrival of many thousands of Russian speakers has had a lasting and often divisive effect on communal politics, shaping the processes of some communities to this day, everyone interviewed for this article agreed.

One of the first parties representing Russian speakers in the internal elections of the Berlin Jewish Community was called “Silent Majority.” Its main platform was the members’ identify as Russian speakers.

From the mid-1990s onward, the Russian-German divide became a permanent issue in internal elections campaigns, according to Lagodinsky, the jurist.

“There was a lot of disappointment” among Russian speakers over how they were received by German-speaking Jews, he said.

Some politicians “played up” this sentiment, he said, naming the current president of the Berlin Jewish Community, Gideon Joffe. Born to Soviet immigrant Jews in Israel, he moved as a child to Germany. According to Lagodinsky, Joffe has “in Trumpian style played up the Russian-speaking identity card” in elections.

Lagodinsky and others accused Joffe of rigging the internal elections of 2015 and clinging to power with “tricks right out of the Soviet period,” as Lagodinsky put it.

Joffe, who has denied the allegations, did not reply to multiple requests for an interview by JTA.

But the fact that Joffe’s main challenger, Lagodinsky, also speaks Russian as a mother tongue “shows we’ve moved as a community passed the language divide and are focusing on the main issues,” Lagodinsky said.

To Lehrer, the historian, the internal divide “is a generational issue.”

“People aged 20-40 don’t care about this anymore,” he said. And whereas some aspects of the problem are “alive, it is quite literally dying out.”