Anti-BDS laws are a constitutional and PR mess. Here’s how to make them better. 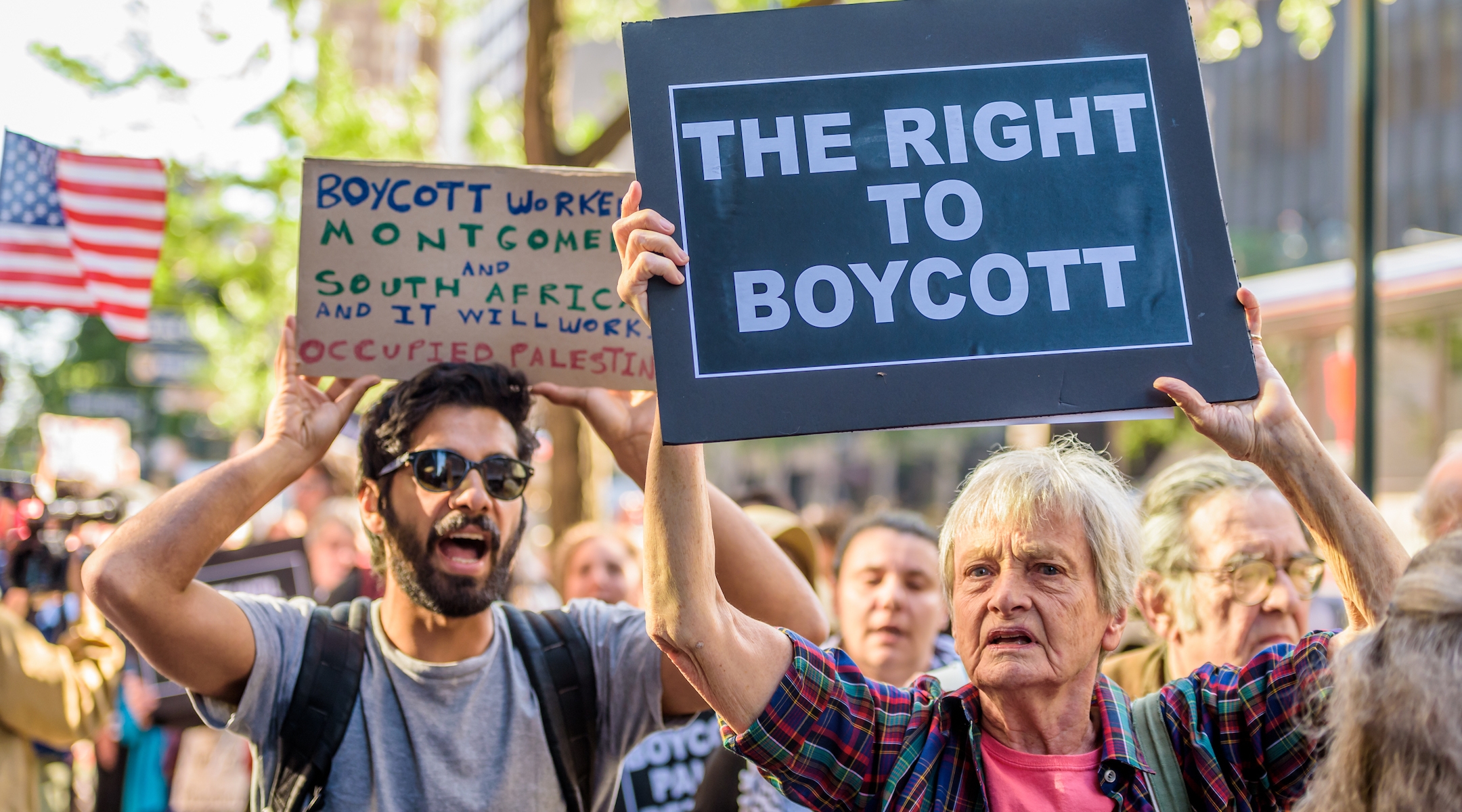 BERKELEY, Calif. (JTA) — Ronald Reagan infamously described the “nine most terrifying words in the English language” as “I’m from the government and I’m here to help.”

Right now, pro-Israel activists are recoiling from the unanticipated consequences of state laws which only sought to “help” them fight BDS, the Boycott, Divestment and Sanctions movement targeting Israel.

The precise content of the laws vary from state to state, but in the main they prohibit state contractors from boycotting Israel during the duration of their contract. Typically, this requires the would-be contractor to sign a declaration disclaiming any such intent to boycott.

Twenty-six states have already passed legislation of this sort, and two — Kansas and Arizona — have seen theirs fail constitutional challenges. But the issue exploded back onto the national scene when a Palestinian-American Texas speech pathologist claimed she was terminated from her position at her local school district after she refused to sign a statement that she doesn’t boycott Israel.

The case has already become a public relations debacle for the pro-Israel community. It has all the appearances of an overbearing government thought-police pressing down on the little guy, holding paychecks hostage in order to demand ideological conformity on the merits of a country two continents away. What possible business is it of Texas what a random speech pathologist does or doesn’t think about Israel? Condemnation has been swift and brutal, and in many cases crossed partisan boundaries.

All of this was eminently predictable (indeed, the Anti-Defamation League did predict it — in internal documents at least). From the start, these state laws have been interpreted in manners that seem calculated to cause maximum embarrassment to those they purportedly “help”— trying to block an academic speaker at Arizona State, refusing to distribute hurricane relief aid in Texas without a commitment from the recipients not to boycott Israel.

It does little good to say “those are misapplications of the law.” When laws are drafted quickly and sloppily, with much attention to the press release and little concern towards the possibility of overreach or misconstrual by the bureaucrats tasked with enforcing them, these are the results you can expect.

At the very least, this latest fiasco should be a cautionary tale about relying on government to wage a fight that should be won and lost in the open marketplace of ideas.

But no doubt some will be less keen on giving up legislative options altogether. Is there a way to craft an anti-BDS law that is not, or at least less, prone to being applied (or misapplied) in nakedly censorial fashion?

Rule One: Don’t write the laws as Israel-only one-offs. While anti-BDS advocates often complain the movement “singles out” Israel for stricter scrutiny, it is fair to rejoin that many anti-BDS laws single out Israel for especially favorable treatment. A Texas state contractor can decide to boycott anywhere from Myanmar to Venezuela to France — but not Israel. Why should Israel, alone of the nations, get the special solicitude of an American state?

It shouldn’t. Boycotts targeting Israel should be governed by the same statutory and constitutional standards as any other boycott — no better, no worse. South Carolina’s “anti-BDS” law provides a useful model: It does not mention Israel at all. It covers boycotts of any jurisdiction “with whom South Carolina can enjoy open trade,” and even then only when that boycott “is based on race, color, religion, gender, or national origin of the targeted person or entity.” Persons are just as limited in their ability to boycott French products as Israeli ones.

A law which singles out Israel appears to take sides in a fraught ideological controversy. It is easy to feel for the Texas pathologist who feels compelled to sign some sort of pro-Israel ideological declaration. It would be harder for her to muster the same sympathy if she objected to stating that she would refrain from discriminating on basis of “race, color, religion, or national origin.”

Rule Two: Anti-BDS laws also should restrict themselves to the contractor’s behavior on the job. States do have a valid interest in regulating how their contractors do the job they were hired to do. They have much less legitimate investment on how such contractors behave on their own time. Yet most anti-BDS legislation requires a contractor to stipulate that they will not boycott Israel, not just in the course of fulfilling their state contract, but in any capacity for as long as the contract is in force. The Texas speech pathologist, for example, cannot refuse to buy an Israeli software program for her home office while working for the school district, even if that software has nothing to do with her work for the school.

It may be true, as law professor David Bernstein argues, that the Texas law only regulates the pathologist as a contractor, and not in her “personal life.” But such distinctions are easily blurred in the case of sole proprietorships and independent contractors, where personal and business purchasing decisions often meld together. And in such cases the potential for misinterpretation and chilled speech is especially high. Take a high school debate judge from a local college who receives a form demanding that he, the “contractor,” forgo boycotting Israel. It would be easy to see how he would perceive the demand to be aimed as his personal, off-the-job conduct.

More importantly, it’s easy to see how an overworked and uninformed school district administrator could believe that. If the goal is to avoid bureaucratic mishaps and chilled speech, it’s probably best to avoid regulating even the “business” decisions of sole proprietorships — at least when they are off the state’s clock (the author of the Texas law has signaled he wishes to amend the act so it no longer applies to sole proprietorships).

By contrast, states are perfectly legitimate in demanding that contractors behave in nondiscriminatory fashion in the course of fulfilling their contract. The state might not have any valid interest in how its speech pathologists stock their home offices, but it has a very strong interest in confirming that they won’t, for example, refuse to treat an Israeli exchange student or refrain from using a valuable educational program just because it was published by an Israeli company. Ditto the college student judging a high school debate: What he does on his own time is his business, but he certainly can’t claim a free expression right to refuse to judge a round that happens to have an Israeli competitor in it.

In sum, the ideal anti-BDS law is one that (a) applies not just to Israel, but generally to boycotts of countries with whom a state has open trade with, and (b) covers how contractors fulfill their contract with the state, but not their private, off-the-job conduct.

You might notice, however, that such a law starts to look like a pretty general non-discrimination commitment. It isn’t really an “anti-BDS law” at all. It’s just an anti-discrimination law.

That’s no accident. When government actors jump in to “help” fight BDS, specifically, they’re likely to do it with a typical bureaucratic mix of grandstanding and ineptitude, and the results are usually as terrifying as Reagan might have predicted. But when they sit down and try to solve a general problem — regulating state contractors as state contractors, not as private citizens, and refraining from punishing people for having the wrong ideology — they might be able to do some common good.