Nelly Ben-Or risked all to play the piano. It helped her survive the Holocaust. 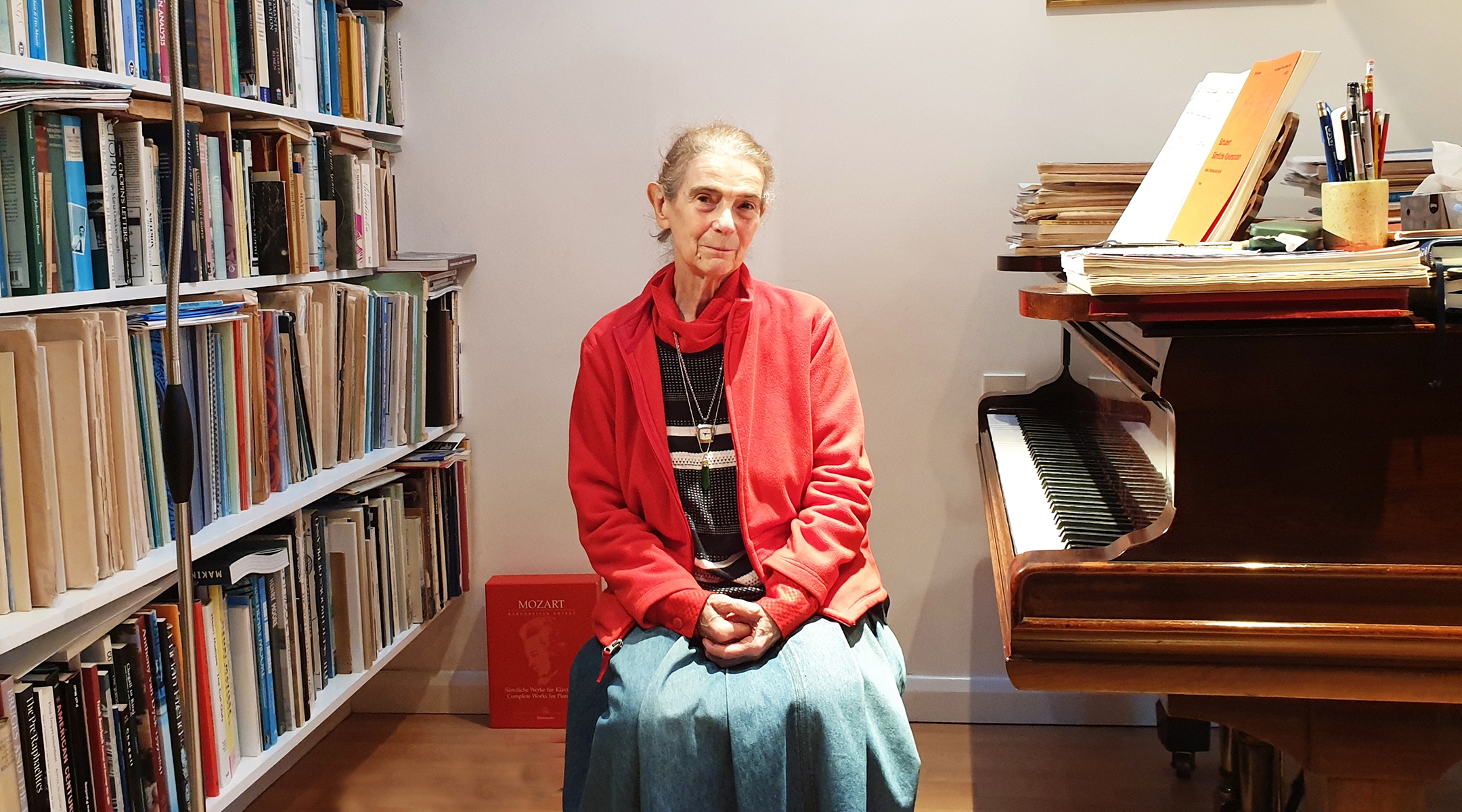 Nelly Ben-Or sitting by one of her two pianos in her London home, Dec. 13, 2018. (Cnaan Liphshiz)
Advertisement

That discipline helped Ben-Or, 86, became an international concert pianist and the person most widely recognized for adapting the Alexander technique for posture and movement improvement for musicians.

But unlike most of her peers, much of Ben-Or’s musical training in her native Poland took place while her family was hiding in Nazi-occupied Warsaw, where her mother, Antonina Podhoretz, time and again risked everything to afford her daughter access to the then scarce instrument.

Ben-Or, who now lives in London and still teaches master classes in piano and the Alexander technique, unfolds the story of her unlikely survival in an English-language autobiography that was published this year titled “Ashes to Light: A Holocaust Childhood to a Life in Music.”

The frank and short account tackles personal issues like the author’s bouts of depression and her unprovoked cruelty toward one of her music teachers after the war. It was celebrated as a “brilliant and deeply moving personal account” by Jonathan Vaughan, a director of the prestigious Guildhall School of Drama & Music.

Rabbi Andrew Goldstein, the president of Britain’s Liberal Judaism movement, called it “an inspiring story, beautifully written” in a forward he penned for the book.

The strength of Ben-Or’s story, which was featured on the BBC World Service radio in July, stems partly from the author bearing witness to momentous wartime events, including the Warsaw Ghetto Uprising. But its uniqueness lies in how it marries opposites, such as betrayal and heroism, hunger and artistic creativity, and survival and self-sacrifice.

Throughout the packed 180-page narrative, one character — the piano — makes repeated and unlikely appearances.

The instrument features in Ben-Or’s earliest memories, from her childhood home in Lwow, which was part of Poland before World War II, now Lviv in Ukraine. She recalls that at 6, German soldiers carried off the piano on which she had practiced in her family’s living room.

“I shivered in fear and despair, huddled against my mother’s body as I watched them taking away the instrument which had become for me such a wonderful source of magic,” Ben-Or writes.

Her family was about to lose much more than their prized possessions.

Ben-Or’s father, Leon, was taken away and, she later learned, killed at the Janowska concentration camp.

Her mother and older sister were able to obtain false “Aryan” identities, but they became homeless, exchanging one hiding place for another. Her sister was left to hide on her own. Ben-Or and her mother scrambled to leave Lwow for Warsaw, where they had a better chance of surviving.

Through one of many twists of fate, the pair missed the last train to Warsaw. They ended up leaving as hitchhikers aboard a military train full of Nazi SS officers. One SS man even tucked in Ben-Or with his green army coat when she feigned sleep on the long journey, she recalls in the book.

That civilian train they missed ended up being searched. Several Jews traveling under false identities were caught and sent to be murdered, Ben-Or’s mother later learned.

In Warsaw, mother and daughter became subtenants of a Polish working class family, the Topolskis. Their hosts quickly caught on that Ben-Or and her mother were Jewish but, at great personal risk, did not report them. Still, neighbors became suspicious, forcing the two Jews to seek a new hiding place. Ben-Or’s mother found employment as a maid with a wealthier non-Jewish Polish family, the Kowalskis.

“My desire to get to that instrument and play it made me nag my mother” to ask the Kowalskis for permission to play, Ben-Or writes. But doing so would have blown their cover as a working class maid and her daughter, her mother feared.

“Musical gifts were so often associated with the Jewish people,” Ben-Or writes.

But “a part of my mother wanted me to keep playing,” Ben-Or told JTA in an interview at her home near London, where she keeps two pianos in a study full of books and orchid plants. Antonina relented, but only on the condition that Nelly pretend not to know how to play, recalled Ben-Or, a frail-looking woman with lively eyes.

At the height of World War II, when the Nazis were hunting and executing people on the streets just below her home, Ben-Or was playing music on a grand piano that brought her brief hope of normalcy.

“The fewer people who noticed me, or you, the safer we were,” Ben-Or’s mother told her.

As a little girl, “playing the piano for chosen periods in the day became moments of paradise on Earth,” Ben-Or recalls. The teacher insisted that Nelly play at a students’ concert, and she was was allowed to play, becoming the talk of the block for a while.

But her mother’s fears turned out to be justified. Soon after the concert, rumors that Antonina and Nelly were “not who they pretended to be” started circulating among the neighbors, forcing the two to leave yet another hiding place, Ben-Or writes.

They were rounded up in German army operations targeting Warsaw citizens who had joined a massive resistance operation that followed the doomed uprising of Jews inside the Warsaw Ghetto.

In yet another narrow escape, Nelly and Antonina eventually were released in the countryside because the concentration camp where the Germans had planned to place them was full. Penniless and hungry for food, the two found shelter in a pig sty that locals had made livable for refugees like them from Warsaw.

But even there, “my ear caught the sound of piano from a neighboring house,” Ben-Or writes in her book. It was the home of the piano teacher in the town of Pruszkow, and again Ben-Or’s mother reluctantly allowed her daughter to play. The teacher allotted the girl half an hour each day.

“I went on eagerly from one piece of music to the next, playing anything that was available,” including Johann Strauss waltzes considered too demanding for 8-year-old piano pupils, Ben-Or writes.

“Yet today, as a concert pianist, I am convinced that I owe to that unorthodox but invaluable experience of piano playing,” she writes. It helped her hold on to her humanity and hopefulness in hours of despair and panic, she says.

After the war, Ben-Or was enrolled in a school for gifted musicians. She and her mother emigrated from Poland to Israel in 1950. A decade later, Ben-Or went to study in England and stayed. She married in 1964. She and her husband have a daughter who lives in London.

The book describes her development as an artist and her experiences as a survivor in three countries.

“It seems as if my voracious appetite for academic and musical progress was partly a reaction to the years of repression,” Ben-Or writes. “It was as if the darkness of the war years had been lifted, and the bright light and fresh air of freedom filled my whole being with the need to receive as much as possible of all that I had missed before.”