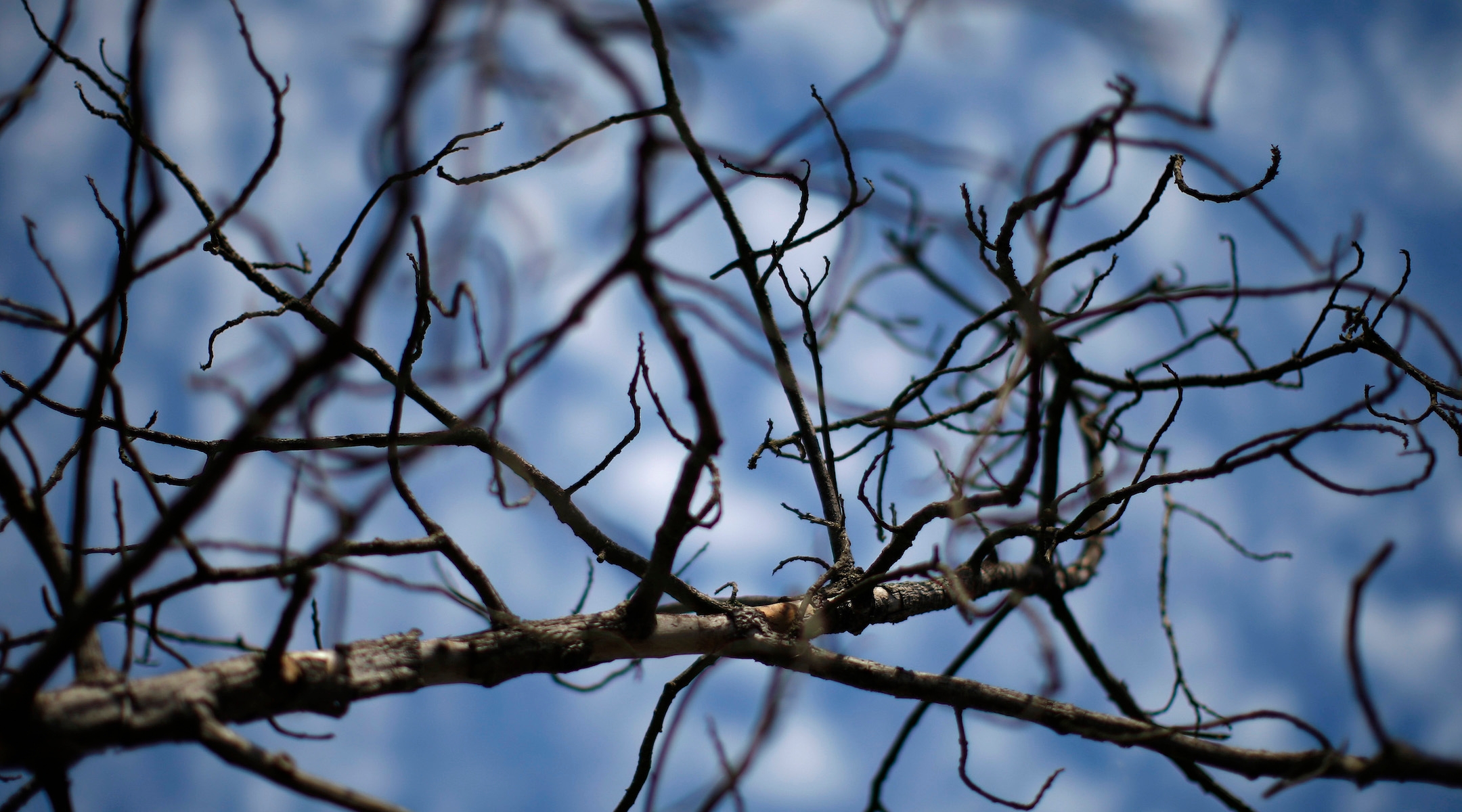 A dead tree in an avocado grove near Valley Center, Calif., in 2014. (David McNew/Getty Images)
Advertisement

NEW YORK (JTA) — Though deep in the winter of North America, we American Jews allow our hearts to warm slightly as we mark Tu b’Shevat — the “New Year of Trees,” when the earliest fruits in the Land of Israel begin to form on the trees.

Tu b’Shevat, the 15th of the month of Shevat, began as a technical date on the rabbinic calendar, the day that divided the fruits that would be tithed with those of the prior year and those that would be tithed during the coming year. But the day has developed into a Jewish Arbor Day, a holiday celebrating the gifts of the trees, in the Land of Israel and elsewhere.

This Tu b’Shevat, which falls on Jan. 21, I am reflecting on the current state of our trees and how they have changed over my lifetime. When I was in grade school, Halloween meant that leaves on trees in the greater New York area had already changed their colors from green to orange, yellow and red, and then to brown. Many were no longer holding onto the branches on which they grew, already making the sidewalks slippery.

But today, I walk along the promenade in Riverside Park and the trees are still filled with leaves well into November. On the other end of the cycle, when I was young, Passover was always, even in late April, still part of the cold, muddy spring, with the branches of trees still completely bare. Today the first flowers push up through the earth in March, and buds are on the trees in late April or even earlier. There can be no doubt that the seasons are changing, and it’s because of global climate change.

Climate change has led to shorter winters and longer, warmer summers, and the developments in this direction will not slow under present conditions. This was confirmed in the landmark report from the United Nations Intergovernmental Panel on Climate Change that was released in October, which brought the immediate consequences of climate change and the dire urgency of the issue to light.

That leads me back to Tu b’Shevat. I propose that we abandon Tu b’Shevat and replace it with “Aleph b’Shevat” — the first day of the month of Shevat, the day that was long ago proposed as the tithing boundary by the School of Shammai, when the School of Hillel suggested Tu b’Shevat.

Why make such a change? Because a date marking a new season 2,000 years ago can no longer reasonably be claimed to mark the same natural event today. On account of climate change, the seasons have already changed sufficiently that we must change our way of counting them.

Isn’t it true that, with rare exception, the halakhah (Jewish law) follows Hillel against Shammai? Yes, that is true. But that would make the shift of celebration to the first of Shevat that much more powerful, for it would represent a countercultural move and therefore an act of protest. Those who mark the new beginning of the arboreal year on the first of Shevat would be declaring their concern for the consequences of global climate change and their insistence that we respond to it.

I confess that this seems a relatively minor symbolic act. But symbols are important, and they have the power to change minds and hearts. Those who ask why some Jews are disrupting the Jewish calendar would get a direct answer: because we have neglected the trees we claim to be celebrating, and we must do something about it.

Those who mark the day on a date when others before them did nothing would be reminded of what we are experiencing, and of our responsibility to act. Tu b’Shevat is not a biblical holiday; its date is not determined in heaven. This means that we — humans — who fixed it on the calendar can change the calendar to reflect new realities and communicate different, now more urgent, messages.

Reflecting, as it does, our concern for the future of trees — and of everything else in nature, including ourselves — Aleph b’Shevat would be a worthy new Jewish occasion.

David Kraemer
Dr. David Kraemer is the Joseph J. and Dora Abbell Librarian and Professor of Talmud and Rabbinics at The Jewish Theological Seminary.
The views and opinions expressed in this article are those of the author and do not necessarily reflect the views of JTA or its parent company, 70 Faces Media.