40 years ago, an American miniseries changed the way Germans thought about their history. Now ‘Holocaust’ is being shown there again. 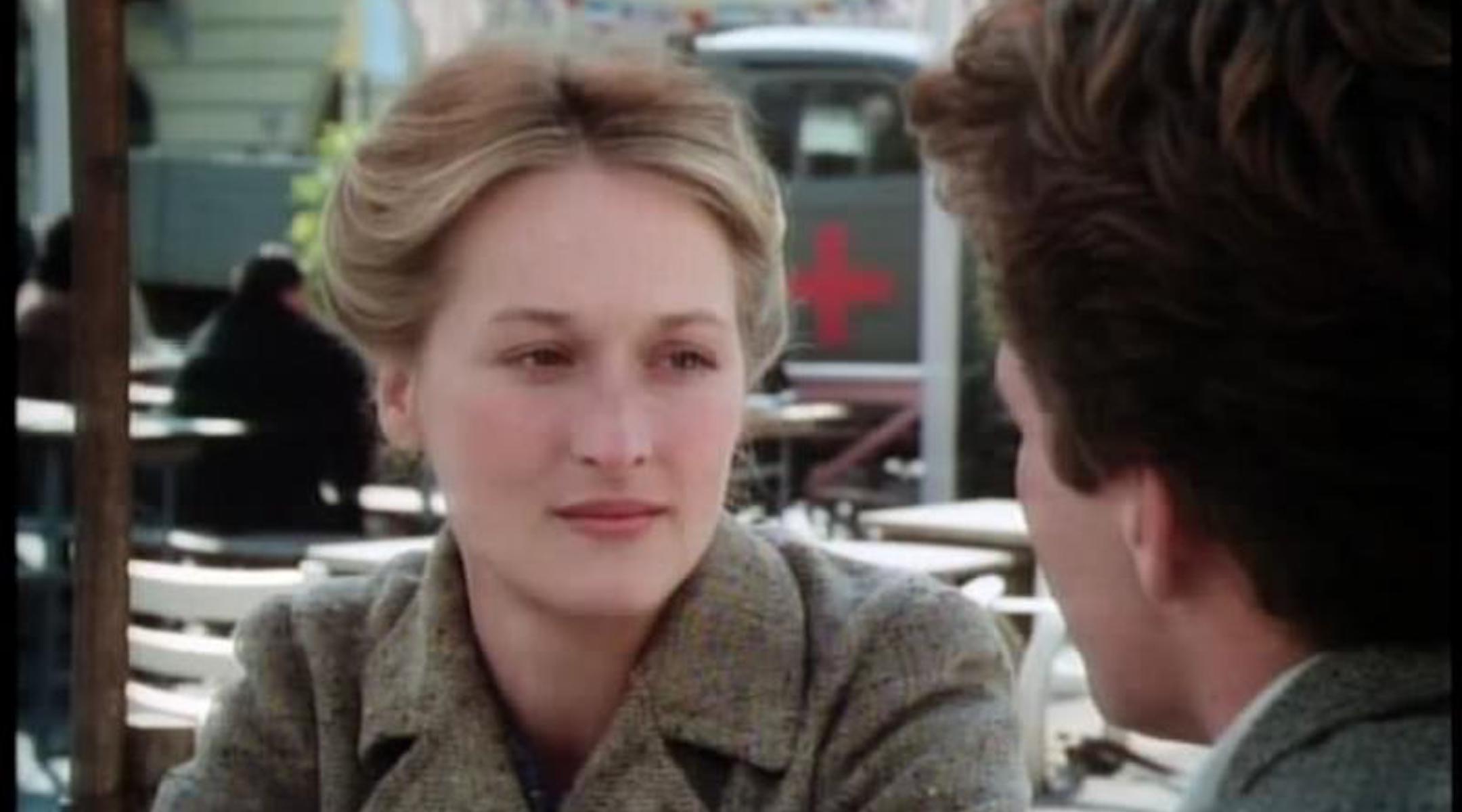 Meryl Streep played the Christian daughter-in-law in a Jewish family in "Holocaust." (Screenshot from "Holocaust" via IMDb)
Advertisement

BERLIN (JTA) — For Sigmount Koenigsberg, the most searing scene in the U.S.-made “Holocaust” miniseries broadcast here 40 years ago was when a German child throws photos of a Jewish family into a fireplace. The pictures curl up and melt in the flames.

The moment “somehow burned into me,” recalls Koenigsberg, 58, a Jew who lives in Berlin.

In fact, the four-part series starring a young Meryl Streep and James Woods – first shown in the United States in 1978 – burned itself into the consciences of many Germans at the time, helping bring about a shift in the country’s approach to its history.

This month, ahead of International Holocaust Remembrance Day on Jan. 27, WDR (West German Broadcasting) is marking the 40th anniversary of that groundbreaking broadcast by bringing  Streep, Woods, Tovah Feldshuh, Michael Moriarty and the program’s other stars back into German living rooms.

Journalist Jorg Schonenborn, the head of TV programming for WDR, said the rebroadcast was triggered by a new documentary by writer Alice Agneskircher about the 1979 screening.

“I realized right away that this would not be enough,” he recently told the educational Gerda Henkel Foundation. “We have to show the entire series again,” even if reactions today might not be the same.

“After all, ‘Holocaust’ is not only contemporary history, but an important part of German television history,” said Schönenborn, who saw the series as a youngster. “And unfortunately, anti-Semitism is not only an historical phenomenon but very much present today.”

Directed by Marvin Chomsky and written by Gerald Green, “Holocaust” recounts the Nazi genocide of European Jewry through two fictional families in Berlin: the Weisses, who are Jewish, and the Dorfs, who are Christian. In the end, both the victims and perpetrators are nearly destroyed.

The series, which aired on NBC over four nights in April 1978, won several Emmy and Golden Globe awards and a large audience, although many critics were underwhelmed. Elie Wiesel famously objected to the series, saying it “trivialized” the Shoah and worrying that “the Holocaust will be measured and judged in part by the TV production bearing its name.”

In particular, the film seems to buy the cliché of Jews “going like lambs to the slaughter” in depictions of mass shootings or the herding of Jews into gas chambers. And many felt the the kick-your-heels happy ending should have ended up on the cutting-room floor.

But the film also portrayed Jewish resistance, and the agonizing position of Jews who collaborated in hopes of saving themselves. It shows how the murder of the disabled paved the way for the genocide of European Jewry, step by step, from mass shootings to gassings. It also portrayed the descent of average non-Jewish Germans into murderous criminality and the determination of many to deny what had happened, even to themselves.

In 1979, an estimated 36 percent of West Germans with TVs – some 20 million people, according to a contemporary article in Der Spiegel magazine – viewed at least one part of the series, which was dubbed into German. The effect was immediate. Later that year, the West German parliament expunged the statute of limitations on war crimes. The term “Holocaust” entered the lexicon (somewhat replaced by “Shoah” after the release of Claude Lanzmann’s documentary in 1985).

Within a few years, tens of thousands of German youth were looking into what had happened in their own hometowns and their own families under the Nazis as part of a nationwide grassroots history movement.

Almost reluctantly, Der Spiegel admired this “trivial” American series, saying it had “managed to do what hundreds of books, plays, films and TV broadcasts, thousands of documents and all concentration camp trials in three decades of postwar history had failed to do: to inform Germans about the crimes committed against the Jews in their name in such a way that millions were shaken.”

In a 2005 interview with this reporter, Chomsky recalled the immediate impact of the German broadcast.

“There were all kinds of [news] stories and people started asking, ‘Daddy, what did you do during the war?’ It was quite a revelation for the generation,” said Chomsky, now 89.

The dropping of the statute of limitations on war crimes was likely the first time “where a nation has … enacted a law directly affected by the viewing and the response to a television show,” he said.

But it also helped change the focus from those who pulled the strings, like the Nazi leaders convicted at Nuremberg and in other high-profile trials, to the perpetrators who could be one’s next-door neighbors.

“The point I wanted to show with all of this … was that people who seem perfectly normal are … capable of [committing] hideous atrocities,” said Chomsky, who also co-directed the 1977 “Roots” miniseries, whose impact on American historical consciousnesses was similarly profound.

Efraim Zuroff, head of the Simon Wiesenthal Center’s Jerusalem office, said there is no question that the “Holocaust” story had the most powerful impact in West Germany. Zuroff has pushed Germany to investigate and prosecute Nazi war criminals.

“The story of the Weiss family personalized the Shoah in a way that touched the average viewer,” he said, “and helped Germans internalize the scope and horror of the tragedy that took place in their country, launched by a movement elected democratically.”

Deidre Berger, head of the Berlin office of the American Jewish Committee, agreed.

“This one TV series opened the virtual Pandora’s box on confronting the Holocaust,” she said. “Sometimes a fictional account that opens people’s hearts can have more impact than a library of books.” 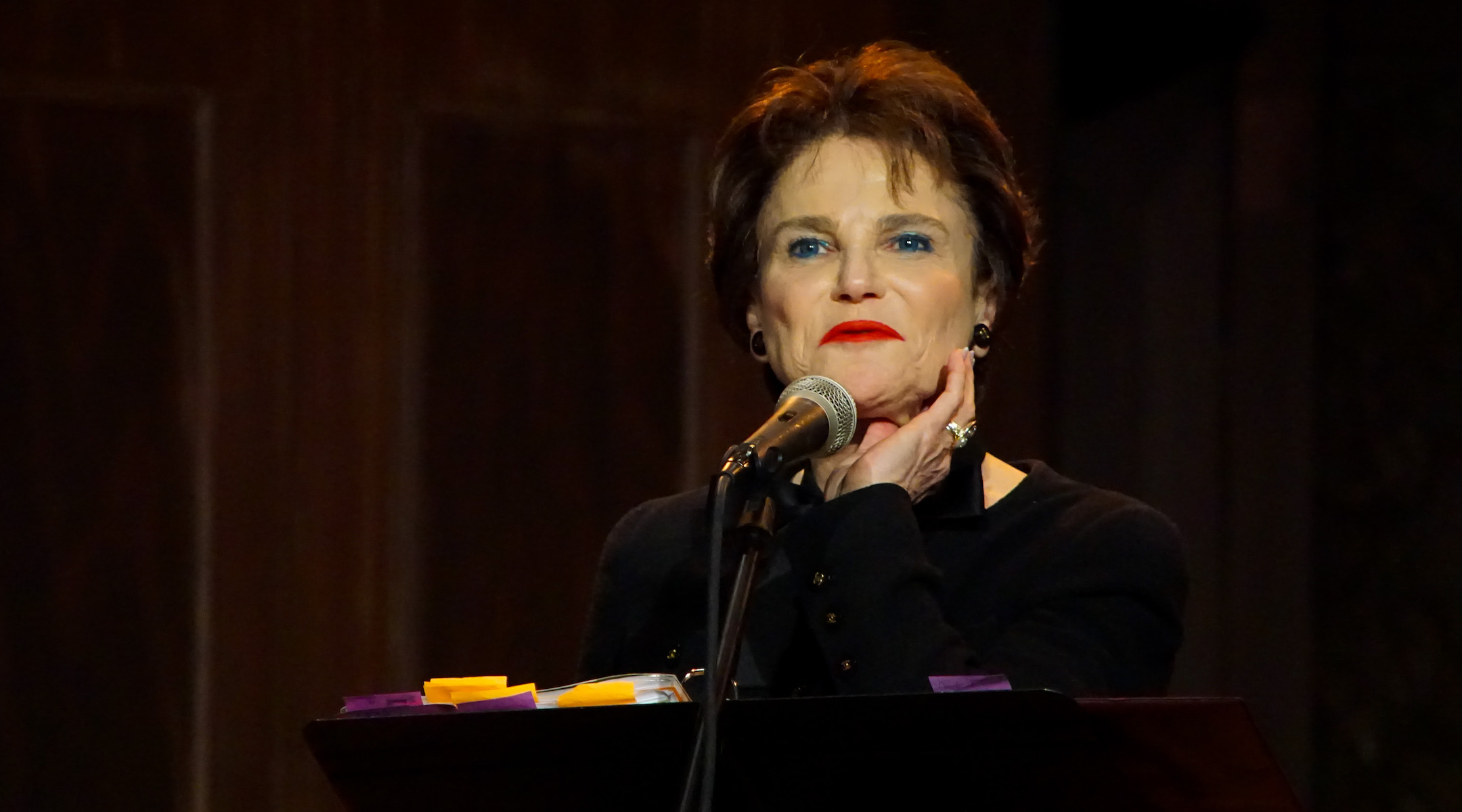 Tovah Feldshuh attends a play reading of the “Queen Of The Mean: The Rise And Fall Of Leona Helmsley” at the Actors Temple Theatre in New York City, April 7, 2016. (Steven A. Henry/Getty Images)

So much has changed in the interim: East and West Germany united in 1990, and Germany’s postwar Jewish community has grown nearly tenfold with the influx of former Soviet Jews. Holocaust education here has evolved: The generation of survivors, perpetrators and eyewitnesses is dying out, and the historical record has been refined through additional facts and interpretations.

But the impact of this series on German non-Jews and Jews, however dated and sanitized some parts of the film may appear today, is beyond a doubt. Historian Edith Raim, born in 1965, recalls watching the series with her family in Landsberg, a town outside Munich. It was one of the first programs they saw together because her parents, both teachers, thought TV had “no pedagogic value.”

“We were glued to the film, even my reluctant father,” said Raim, who is not Jewish. Later that year, “the youth organization of the trade unions started commemorations on the [local] concentration camp cemeteries.”

Raim soon joined with high school classmates to research the history of those camps.

“In the case of Landsberg, in fact, the series helped locals to confront the Nazi past,” she said.

In West Germany, teachers incorporated the series into their classes. It also sparked public discussions.

But on the other side of the so-called Iron Curtain, in East Germany, discussions were more private, Jalda Rebling says.

Rebling, today a cantor with the Jewish Renewal movement, watched the program with her parents in their home near East Berlin. She recalls that her mother, the singer Lin Jaldati, a Dutch survivor of Auschwitz and Bergen-Belsen, “was very angry about this kitschy story” saying “Nobody looked that nice in the camps.”

“She didn’t like the Hollywood part of it,” Rebling said. “But today I would say if it hadn’t been for that, people wouldn’t have watched.”

The focus of East German education and memorials was on anti-Nazi resistance. They did not officially hold up any mirrors to themselves, instead shoving the perpetrator legacy to West Germany.

But there were ways to learn about this history, says Rebling, who recalled her anger when a friend said it was “so wonderful we have now this film, we never knew about this entire Holocaust.” Rebling “took him into a bookshop and put him in front of Holocaust-related books that were published in East Germany. I said, ‘You just didn’t look for it earlier.’”

Like Rebling, Koenigsberg knew the history from his own parents, survivors from Poland. Sigi was an 18-year-old high school student in Saarbrucken, former West Germany, when the family watched the series.

“Especially the episodes that take place in Poland or in the concentration camps, my parents said, ‘That is only part of what happened. It can’t be reproduced,’” he recalled.

But the program had an important impact, Koenigsberg said. In school, “before they always talked about 6 million Jews. And Jewish narratives were not presented in history classes. But now they had the story of one family. And they could feel with them.”

“Textbooks were changed and adjusted, and it was a big event for Germany,” recalled actor Tovah Feldshuh, who played the role of Helena Slomova, a Jewish resistance fighter from then-Czechoslovakia. “I was wearing fatigues in the woods. It was my first death on film,” she said in a telephone interview from New York.

Feldshuh said she felt privileged to play the role of “a freedom fighter, to be brave, rather than” someone who appeared to give up. She “went through the Holocaust miniseries angry, not upset.

After the premiere in 1978, Wiesel confronted Feldshuh.