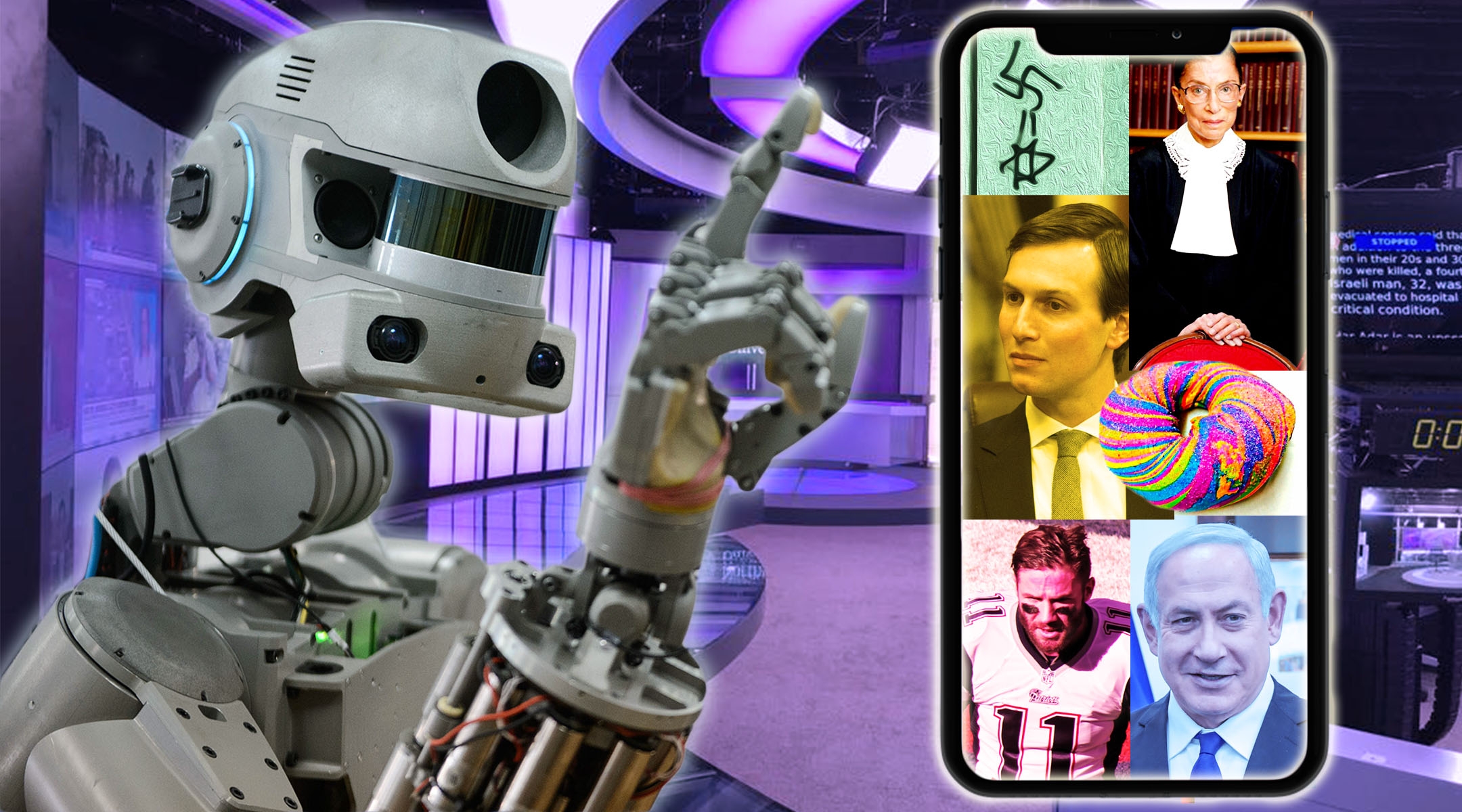 We have seen the future of Jewish news, and we don't have to contribute to its healthcare plan. (JTA Montage – Laura E. Adkins. Images: Getty Images, Wikimedia Commons, Creative Commons)
Advertisement

(JTA) — The New York Times reports that The Associated Press, Bloomberg News and The Washington Post are all using artificial intelligence programs to write news stories. Such programs, with names like Cyborg, Heliograf and Bertie, can “spit out an immediate news story that includes the most pertinent facts and figures” on things like earnings reports, high school football games and earthquakes.

According to the article, news-writing robots are not a threat to human reporters, but free up reporters to do more valuable work.

Which is exactly what a news-writing robot would say, isn’t it?

At JTA, we are testing our own robot reporter, Bert Cyberg, to help us with the kinds of Jewish stories that essentially write themselves. We programmed him with dozens of story templates like those below. If he plays his memory cards right, Bert might one day be running this place.

(JTA) — Police in PLACE are investigating an attack on DATE, in which vandals scrawled “CURSEWORD Jews” on the walls of Congregation Beth HEBREW NAME. Police have so far refused to identify it as a hate crime.

(JTA) — British Jews called on Corbyn to resign after he said SOMETHING THAT WAS OSTENSIBLY ANTI-ISRAEL BUT SOUNDED A WHOLE LOT LIKE SOMETHING AN ANTI-SEMITE WOULD SAY.

(JTA) — A senior White House official said today that President Donald Trump will release his Israeli-Palestinian peace plan at a time that will allow its best chance for success. The official said there are “many factors we are considering in evaluating the timing of the release of the peace plan.” U.S. Ambassador to Israel David Friedman has cautioned the Trump administration’s Middle East team not to roll out the White House plan at a time that would in any way interfere with OH, JUST ABOUT ANYTHING.

Israel DOES SOMETHING, deeply dividing Jewish liberals and conservatives

(JTA) — The Israeli Knesset passed a bill today that would DO A THING THAT SEEMS SURGICALLY DESIGNED TO POLARIZE THE DIASPORA. Critics of the bill said it would threaten Israel’s reputation as the Middle East’s only democracy and would embolden the boycott Israel movement. Supporters of the bill said it was a necessary response to Palestinian aggression and not passing the bill would embolden the boycott Israel movement.

Roger Waters DOES ANOTHER THING TO SHOW HE STILL HATES Israel

(JTA) — The Israeli prime minister denounced a police report saying he did SOMETHING THAT IS UNDENIABLY CORRUPT BUT AT THE SAME TIME DISTURBINGLY PETTY. Netanyahu described the accusations as a witch hunt and blamed the media. In a YouTube video, Netanyahu said he is focusing on what’s important for his country. This is the INSERT ORDINAL NUMBER corruption case Netanyahu is facing.

This TYPICAL JEWISH FOOD is getting a 21st-century makeover

(JTA) — The TYPICAL JEWISH FOOD served at RESTAURANT is not your bubbe’s TYPICAL JEWISH FOOD. Chef NAME starts with standard ingredients but with a twist: Instead of chicken fat, she will use SOMETHING VEGAN, and instead of ANIMAL PROTEIN, she adds some kind of GRAIN YOU NEVER HEARD OF. “Most people can’t tell the difference,” says NAME OF LYING CHEF.

Ruth Bader Ginsburg DOES JUST ABOUT ANYTHING

(JTA) — The Supreme Court justice was seen this week PERFORMING SOME BODILY FUNCTION following SOME SCARY KIND OF MEDICAL SETBACK. Appearing at a public event later in the day, she said SOMETHING INCREDIBLY ADORABLE BUT AT THE SAME TIME WISE AND INSPIRING.

(JTA) — Prime Minister Benjamin Netanyahu won a clear victory in Tuesday’s elections and seemed all but certain to form a new government and serve his ORDINAL NUMBER term, despite pre-election polls showing little enthusiasm for a man who has led the country for over NUMBER years. Opposition leader NAME OF PERSON YOU THINK YOU HEARD OF BUT AREN’T REALLY SURE hoped to gather enough seats in a coalition with NAME OF SOMEONE YOU ARE SURE YOU HEARD OF BUT MAYBE NOT, but fell short as voters appeared to prefer stability to OH, JUST ABOUT ANYTHING.

(JTA) — New England Patriots Jewish wide receiver Julian Edelman DID SOMETHING SOMEWHERE. He becomes the first Jewish player to DO THIS THING. Edelman, who is Jewish, DID THIS THING VERY WELL. Robert Kraft, the owner of the Patriots, is also Jewish. So is Edelman.