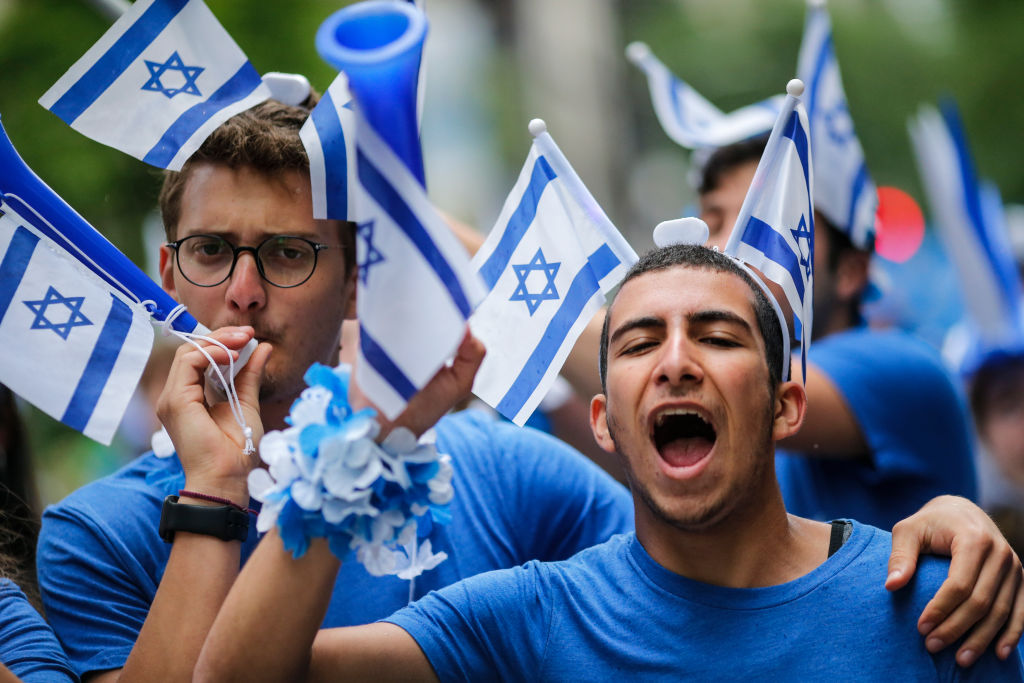 Now that Israel actually exists, progressives have no idea what to make of Zionism. (Kena Betancur/Getty Images)
Advertisement

LOS ANGELES (JTA) – I was born in 1995, which means a lot of things. The Twin Towers toppled when I was only in kindergarten. I’m a digital native. In my lifetime, Israel has always existed. And most people have no idea what the word “Zionism” means.

At lunch recently with a friend who is Jewish and deeply knowledgeable about politics, she illustrated just how serious the misunderstanding is. After two hours of talking about progressive activism, her eyes widened in horror when I noted that I am a Zionist.

“Doesn’t that just mean you’re against Palestinian rights?” she asked.

“Of course not,” I replied, and asked her if she knew what the term Zionist actually means.

I explained to her that Zionists are simply people who believe in the right of Jewish people to have self-determination in their ancestral homeland.

Rather than supporting a specific administration or everything Israel does, “Zionism is Jewish self-determination,” Sara Yael Hirschhorn, visiting assistant professor in Israel studies at Northwestern University’s Crown Family Center for Jewish and Israel Studies, told me recently. “It’s co-signing that Israel should exist, that Jews have a right to self-determination no more or no less than any other nationality, that Jews are not only a religion but they’re also a people and a nation, that they have the right to have control over their own affairs, that their existence is not only predicated on being a minority in some other country.”

Although some critics would argue otherwise, Zionism does not dictate that Jews deserve self-determination at the expense of the Palestinians, though some Zionists do believe that and have tried their best to make it so in modern Israel. But critically, their discriminatory views did not develop out of their Zionism but rather because of other implicit biases and fears. My Zionism implores me to advocate for the self-determination of Palestinians and other ethnic groups in the broad fight for indigenous rights. No nation should win freedom by marginalizing another one, and many Zionists and anti-Zionists alike make the mistake of assuming we cannot provide statehood and dignity to both.

After our lunchtime conversation, my friend realized that she’s a Zionist, too.

I’ve had this interaction in every pocket of Los Angeles with countless people my age, both Jewish and non-Jewish. I’ve explained what Jewish self-determination and Zionism means over Brazilian food in Century City, lattes in South Central and hummus in Hollywood.

Everywhere I go, it seems that other people are redefining the term and associating it with things I would never co-sign. While Zionism looks different for every Zionist, I am vocally against the oppression of Palestinians, the occupation of the West Bank and Israeli Prime Minister Netanyahu’s administration. Only 3 percent of American Jews identify as “generally not pro-Israel,” but the majority of pro-Israel American Jews also say that they are critical of “some” or “many” of Israel’s policies.

Jonathan Sarna, the director of the Schusterman Center for Israel Studies at Brandeis University, assured me that my friends are not the only Americans who have a serious misunderstanding of Zionism.

“Most American Jews and certainly most American non-Jews, haven’t the slightest idea of Zionism,” Sarna told me. “There are many Jews, not just many American liberals, who somehow think that Zionism is about expelling Arabs or doing all sorts of things, which it certainly has nothing to do with.”

Among many young people, even young Jews, Zionism has become synonymous with settler colonialism, Islamophobia and sometimes just racism. Yet these very people who have no idea of the meaning of the term are redefining it and even using it as a slur. Many otherwise progressive people have made it clear that they want Zionists out of their spaces and out of existence.

How has the meaning of Zionism been lost on most of my peers? Weren’t we the generation who reframed feminism to mean “gender equality,” which is its true definition, rather than whatever misogynists pretend it to mean?

Did the ability to identify with Jewish self-determination vanish once the reality of a Jewish state sunk into the American consciousness?

Perhaps the modern state, warts and all, has made Zionism easier to vilify.

“I don’t think Zionism is co-signing Benjamin Netanyahu’s politics, but it is co-signing the idea of a state of Israel that currently exists and not one that we might have fantasized in 1896,” Hirschhorn said. “We can’t rewind the tape of history to come up with a different possibility.”

“There are plenty of anti-Semites in this world that have wanted Jews to be powerless and have taken advantage of their powerlessness,” she added. “The State of Israel today represents the idea that that is never going to happen again and, removing the Palestinian issue from this calculus, there are people in this world that don’t like the idea that Jews now have a state and have the ability to protect themselves and possibly protect others.”

Rather than a nuanced and complex appreciation for Jewish self-determination and protection, “Zionism on Twitter is #occupation, #genocide, #settlercolonialism, #evil. That’s what Zionism is for our generation,” Hirschhorn said. For my peers, that nuance has vanished like a selfie sent through Snapchat.

As a writer, I receive comments that I’m a racist Zionist every time I’m vocally Jewish on the platform. Lately I’ve become increasingly disillusioned with the Israeli government, but I’m also standing stronger than ever in my belief that the state itself must exist.

“Zionism’s supposed to be about creating a safe haven, and that self-determination was the only way to protect ourselves as a people from anti-Semitism,” according to Hirschhorn, who said that most young American Jews, unfortunately, see Israel as a vacation spot more than as a necessary homeland. “People of our generation don’t relate to that idea that Israel or Zionism is sort of a safe haven. Other than Pittsburgh, which seemed to be sort of a shock to a lot of the American Jewish community, we generally have the feeling that we live safely and comfortably in another country under leadership or rulership that isn’t necessarily our own.”

This may explain why, as Sarna explained, when Jewish safety is threatened, Jewish support for Zionism generally goes up. Thankfully, America has generally been safe for Jews. Unfortunately, that means that not every American Jew appreciates the need for a Jewish state.

“After thousands of years of being colonized or sent into [the] Diaspora or disempowered or persecuted or killed, Zionism allowed Jews self-determination in a land that had historically been theirs and to which they returned,” Sarna said. “Young Jews don’t even remember that there was a time when no one would accept Jews. They imagine, ‘Oh, Jews are white folks and they’re powerful and everybody wants them. The president, who is not so fond of Hispanic immigrants, loves Jews. He recognized them at the State of the Union,’ and they imagine it’s always been that way.”

As the first recent generation of my family not to be displaced by Nazis, I simply cannot forget our history of exile. I do not believe that any country other than a Jewish state is capable of being a truly safe home for Jews. Some may see that as a symptom of intergenerational trauma, but for me it’s an analysis of history. From Iran to Ukraine, every country we’ve lived in has turned on us. Many Jews in the United Kingdom and France feel that their nation is in the process of doing just that.

But just like the Black Power, LGBTQ liberation and feminist movements that blossomed in the 1960s, the Zionist movement has been perpetually and falsely maligned by those who view pride in Jewish culture and existence as violence.

In the end, perhaps that’s at the root of why the word Zionism has been snatched from under us: Zionism inherently calls for Jewish power, which is something much of the world will always feel unsettled by.