The Pittsburgh shooter could have killed my husband. I still don’t want him to get the death penalty. 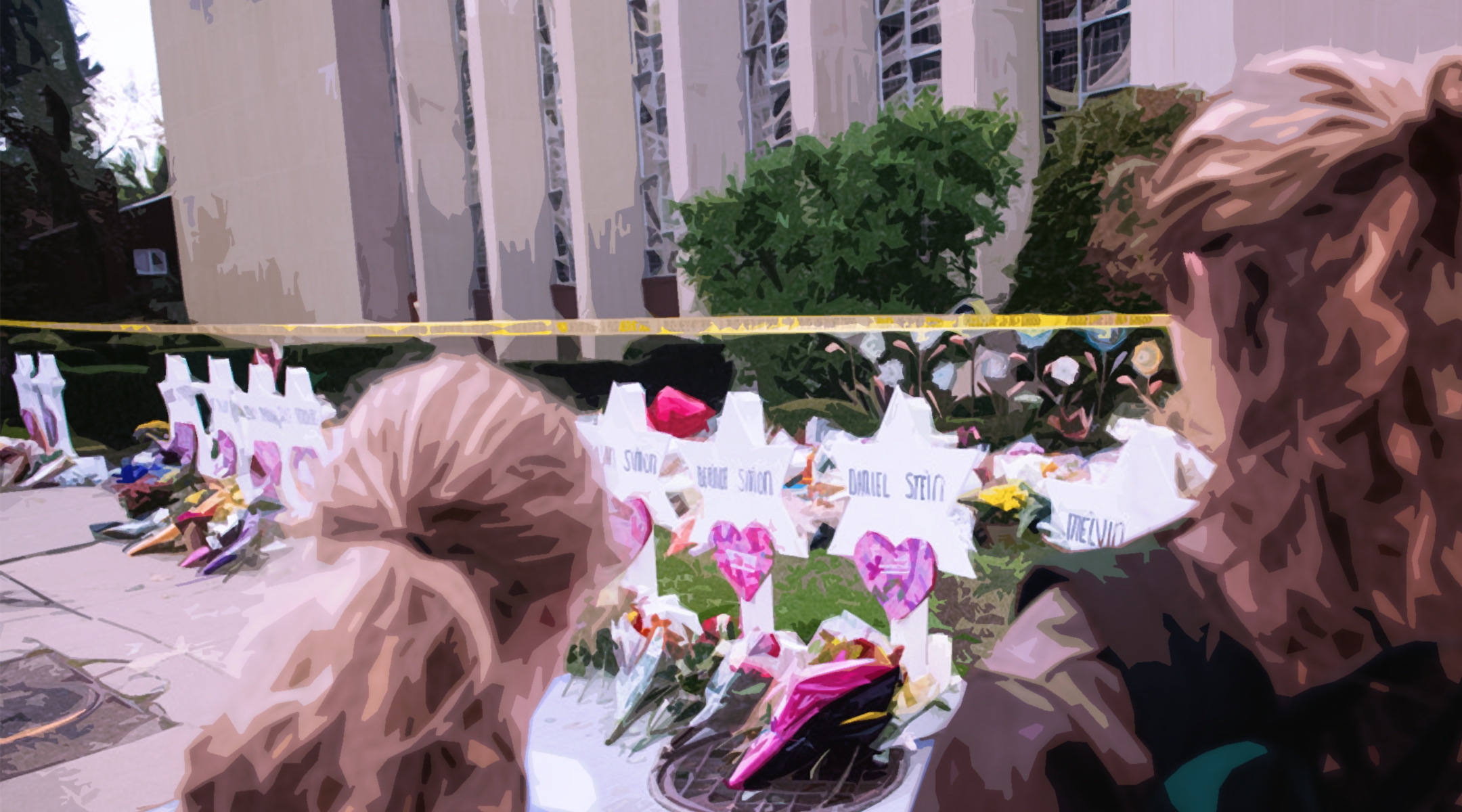 Despite the terrible harm the Pittsburgh shooter has caused to my community, calling for his death is not the Jewish way. (Getty Images)
Advertisement

PITTSBURGH (JTA) — On Oct. 27, a shooter entered my Pittsburgh synagogue and killed 11 Jews who just wanted to pray.

Three congregants from our New Light Congregation — Dan Stein, Mel Wax and Rich Gottfried — were among the slain. My husband, Rabbi Jonathan Perlman, was in the room where they were killed, hiding alongside two others.

Dan, 71, had wanted to be a translator for the United Nations when he was young and had spent time in South America. Rich, 65, not only volunteered for the synagogue but gave his professional services as a dentist to patients who could not pay. Mel, a retired accountant, did some people’s taxes for free and had helped many residents of his apartment building register to vote.

The synagogue feels emptier these days without their presence and commitment.

The evil of the shooter who took their lives is beyond human reckoning. And yet, I hope the prosecutors do not pursue the death penalty.

When Jews are killed just for being Jewish, we commemorate them with the words “Hashem yikom damam,” may God avenge their blood. This formulation absents us from the equation since it expresses that it is God’s responsibility, not ours, to seek ultimate justice. As humans, we are incapable of meting out true justice when a monstrous crime has been committed.

Although there are many Torah prohibitions that call for a death sentence, our tradition does not interpret them literally. According to the Mishnah, a Jewish court is considered bloodthirsty if it allows the death penalty to be carried out once every 70 years, with some of the rabbinic sages balking at ever approving the sentence (Makkot 1:10).

In short, many rabbis just don’t see the death penalty as effective or just punishment.

A Talmudic parable further illustrates this point. The sage Rabbi Meir was frustrated by the highway robbers in his town, so he prayed that they should die. His wife, Bruria, a Talmudic sage in her own right, told him to rethink his position. She pointed out that Psalms 104:35 says that “sins should cease,” not “sinners should cease.” Rather than pray for the criminals to die, Bruria requested that Rabbi Meir pray that they repent. Rabbi Meir listened to Bruria; the men atoned (and relented).

There is a modern corollary in the story of white nationalist Derek Black. The scion to an influential white nationalist family, Black renounced his beliefs after spending time in a different kind of environment: around a Shabbat table at his college. The young man who invited Black for Shabbat, Matthew Stevenson, said “Derek’s example has convinced me that no matter how deeply involved somebody is in a negative pattern of behavior or mired in a negative ideology, they’re never in too deep. There is always a chance for redemption.”

Bruria and Stevenson articulate the Jewish attitude toward those filled with hate. I have no way of knowing whether the Pittsburgh shooter is capable of redemptive behavior, but I know from both Talmudic and contemporary sources that humans are capable of it.

The best punishment, in my mind, would be to give the shooter a sentence and an opportunity to abjure his hateful beliefs about Jews and immigrants and work for tolerance and valuing diversity in our country. I won’t hold my breath waiting for him to emulate Derek Black, but Black’s example shows that it is certainly possible. Calling for the death penalty means there is no possibility for the shooter to repent, to change or to improve. I would rather not foreclose that possibility of change, slim as it may be, by putting someone to death. Even if, like the man who shot nine worshippers at an African-American church in Charleston in June 2015, the Pittsburgh shooter never regrets his deeds, I want to affirm that change is possible.

Eleven precious Jewish souls have been taken from this world before their time. We can’t replace them or fix the pain left by their absence. For me, the true revenge against evil is that our congregation is working to strengthen ourselves as Jews. Since the shooting, we have more adults learning Hebrew for the first time. Many have committed to learning how to lead the communal prayers that Dan, Mel and Rich used to recite. I have three new haftarah students, women who never had a chance to learn this skill when they were younger.

Unfortunately, we still need two new members for the High Holidays choir: All five of those who sang “who shall live and who shall die” on Rosh Hashanah were in the building on Oct. 27, and only three of them are still with us in this world.

I would love to see those in the larger Pittsburgh community and the American Jewish community as a whole adopt the ideas espoused by Marisa Fernandez, a college student who after Pittsburgh committed herself to being more visibly and proudly Jewish, to living a full and meaningful Jewish life. I know that Dan Stein, Rich Gottfried and Mel Wax would be proud. Creating more knowledge of what Judaism and Jewish values are, and encouraging more Jews to commit to them, is the most profound way to avenge their blood.

I hope that the U.S. attorney general and the Department of Justice seek a penalty that would imprison the Pittsburgh shooter for life without parole. The best vengeance for Jews, rather than seeking the shooter’s death, is strengthening other Jews and Jewish life in Pittsburgh and around the world.  Doing so will mean that Jews, not forces of evil, have the ultimate victory.