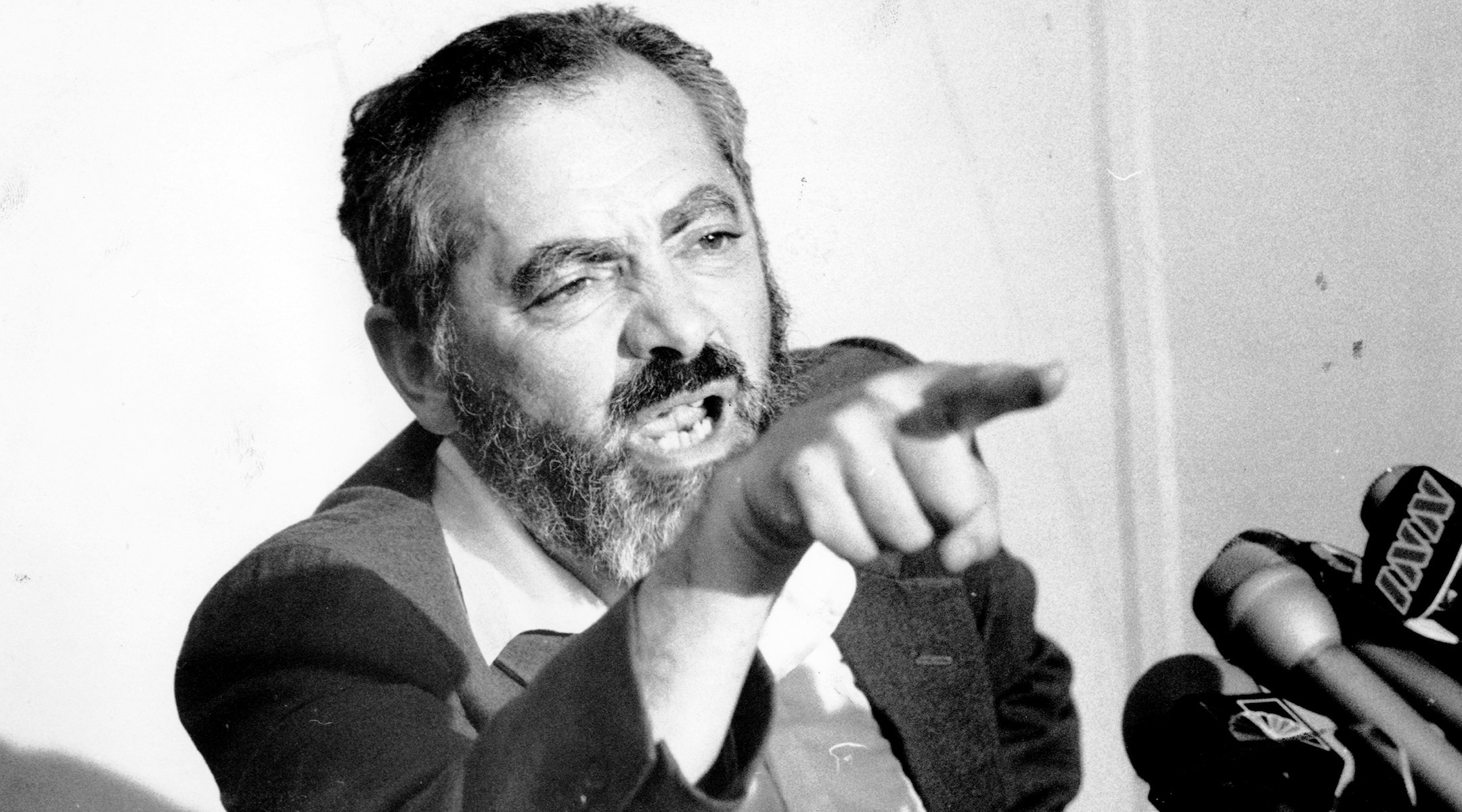 (JTA) — In the 1980s, Israel’s right and left fought three fiercely close elections over the direction of the country, splitting the vote so evenly in one case that they were forced to share powers.

Throughout it all, however, the Likud and Labor parties agreed on one thing: Rabbi Meir Kahane, the right-wing extremist, was unfit to serve in Israel’s parliament.

Kahane called for Arabs to be expelled from Israel, and his Kach party had a history of harassing Israeli Arabs. Before coming to Israel, Kahane was the leader of the militant Jewish Defense League in New York City. Kahane served time in prison both in the United States and Israel.

When Kahane was elected to the Knesset in 1984, despite widespread opposition, the other legislators responded by walking out of the parliament en masse whenever he rose to speak. American Jewish groups also frequently spoke out against him.

“This dangerous phenomenon will pass because no public figure or member of Knesset supports it,” Likud Prime Minister Yitzhak Shamir once said about Kahane, according to Haaretz. Shamir also called Kahane a “dangerous character.”

It’s unclear whether any of Jewish Power’s candidates will win election or what influence they might have if elected. But several major American Jewish groups, as well as Israeli public figures, are opposing the move as an endorsement of the extremism once rejected by previous Israeli governments.

“I never thought I would see this day,” Yossi Klein Halevi, an American-Israeli author who was a follower of Kahane in his youth and now stridently opposes the ideology, told i24 News. “Every society has its fringe fanatics. But what Prime Minister Netanyahu has done, because he’s desperate, because he’s in an increasingly tight political race, is open the door to evil.”

A chorus of centrist and liberal American Jewish organizations opposed the merger this week. The Reform movement, the Anti-Defamation League, the American Jewish Committee and several other groups called the encouragement of Jewish Power an unacceptable condoning of extremism. Malcolm Hoenlein, the executive vice chairman of the Conference of Presidents of Major American Jewish Organizations, called the merger “very disturbing” in an interview with the Associated Press. The statements did not appear to be made on behalf of the conference itself.

“He obviously has some political calculation that drove him to it, but politics can’t dictate everything,” Hoenlein said, referring to Netanyahu. “You have to take into consideration all of the ramifications and all of the concerns.”

On Friday, the American Israel Public Affairs Committee, the pro-Israel lobby, seconded the American Jewish Committee’s condemnation and noted that it has a policy of not meeting with Jewish Power. Centrist Jewish organizations, especially AIPAC, usually hesitate to criticize Israel on internal politics.

“The views of Otzma Yehudit are reprehensible,” read a statement by the American Jewish Committee, a large, centrist pro-Israel group, using the party’s Hebrew name. “They do not reflect the core values that are the very foundation of the State of Israel.”

The statement went on to say: “Historically, the views of extremist parties, reflecting the extreme left or the extreme right, have been firmly rejected by mainstream parties, even if the electoral process of Israel’s robust democracy has enabled their presence, however small, in the Knesset.”

Neither the AJC statement nor AIPAC’s referred specifically to Netanyahu or his deal with Jewish Power. A coalition of left-wing groups were not as reticent.

“This week, Prime Minister Benjamin Netanyahu, keen to shore up his electoral position, orchestrated the unification of the extreme right-wing party Otzma Yehudit (‘Jewish Power’) with the National Union so that it could enter the Knesset in a consolidated right-wing bloc,” read a statement by eight groups, including the New Israel Fund, J Street, the National Council of Jewish Women and the Reconstructionist movement. “We are outraged that right-wing political parties and their leadership have reversed course and opened the door for Kahanists to enter into the Israeli political mainstream.”

No major right-wing Jewish groups have condemned the merger. The National Council of Young Israel, a traditionalist Orthodox synagogue association, defended Netanyahu’s actions. The council called out a past instance when the Israeli left relied on votes from Arab-Israeli parties to pass a peace deal.

“Prime Minister Netanyahu acted to get right-wing parties to merge in order to meet the threshold necessary to secure a victory in the election,” read a statement made Monday by Farley Weiss, President of the National Council of Young Israel. “We understand what Prime Minister Netanyahu did, and he did it to have ministers of the national religious and national union parties in his coalition.”

Most American Jewish groups also opposed Kahane’s activities in the United States and Israel in the 1960s, ’70s and ’80s. In the United States, Kahane’s group militantly protested on behalf of Soviet Jews, including bombing Soviet diplomatic missions in New York. After serving time in the U.S. for violating probation after making a firebomb, Kahane moved to Israel, where he went to prison for violating an order barring him from entering the largely Palestinian city of Hebron.

Despite legislative efforts to ban his party, Kach, it won one seat in the 1984 Israeli elections — enough to get him into Knesset. He used the position to advocate for expelling Arabs from Israel and otherwise disseminate racist statements. He was condemned by parties across the spectrum, as well as Israel’s Chief Rabbinate and American Jewish groups.

“There can be no hesitation, no ambiguity, no equivocation in voicing our rejection and condemnation,” Marshall Grossman, a Jewish community leader in Los Angeles, said in 1984. Kahane “violates both the letter and the spirit of Israel’s declaration of independence, which accords freedom and equality of citizenship to all people regardless of race and religion.”

“I feel that this phenomenon is shameful, disgusting and dangerous,” the attorney general, Yitzhak Zamir, told the Knesset in 1984. “A silence by the Knesset, or taking no stand at all on the issue, could be interpreted as acquiescence to Kahane’s expressions and actions.”

Kahane’s defenders and critics of the Israeli right, meanwhile, said he was only saying out loud what was unspoken in right-wing politics: that by rejecting autonomy for Palestinians, the right had either to support the expulsion of Arabs or commit to the permanent control of a restive population. Speaking in New York City in 1984, Kahane said that “no Arab wants to live in a Jewish state” and called expulsion a quid pro quo for the mass expulsion of Jews from Arab countries following Israel’s independence in 1948.

In 1988, Kahane was suspended from the Knesset for swearing at an Arab member and waving a noose at him. That same year, with Kahane’s party poised to win more than 10 seats in elections, it was banned from running due to its racist platform — at the urging of Likud. Kahane was assassinated in New York in 1990, and two years later, the Israeli Supreme Court barred successor parties from running.

But are the present-day parties run by Kahane’s followers the same? Israel’s Central Elections Committee has said no — that they in fact can run. In 2012, the committee rejected a petition to ban Power to Israel, a far-right party led by Michael Ben-Ari, who leads this year’s Jewish Power. And Ben-Ari did previously serve in the Knesset, from 2009 to 2013.

Regardless, Ben-Ari will only be elected this year if his party wins enough votes to have five seats in Knesset. And if that happens, he will be the lone representative of his ideology in the body — just like Kahane 35 years ago.