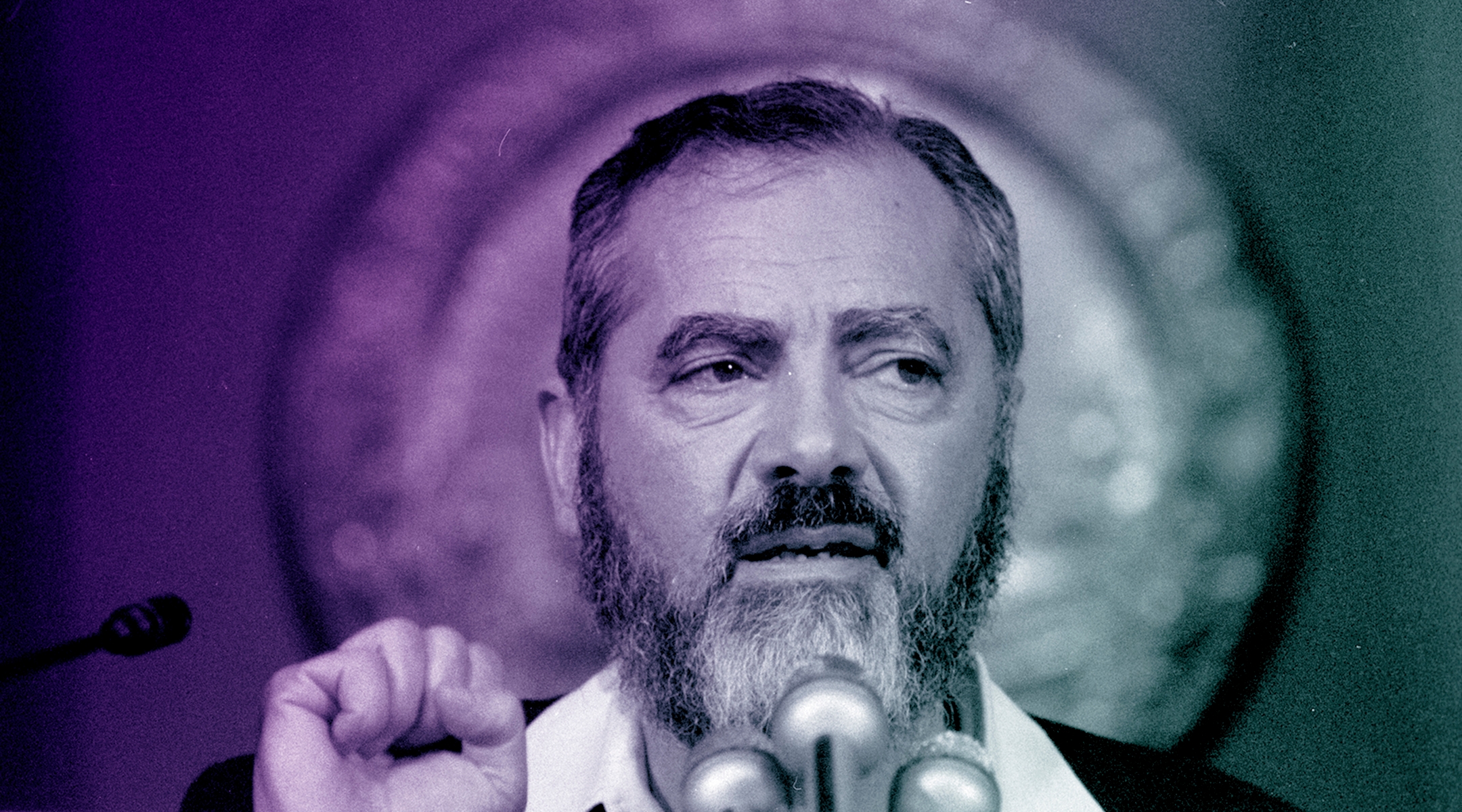 (JTA) — When Israeli Prime Minister Benjamin Netanyahu brokered a partnership between the extreme right-wing party Jewish Power, or Otzma Yehudit, and the more moderate right-wing Jewish Home, the late American-born Rabbi Meir Kahane was suddenly all over the news.

Kahane, whose extremist Kach party was outlawed in Israel several years after his assassination in 1990, is the ideological father of Jewish Power. By extending a welcoming hand to the party ahead of Israel’s April elections, Netanyahu was accused of legitimizing Kahane’s deep legacy of racism, violence and hatred.

But understanding Kahane — and his ideas — goes much deeper than just knowing that he has a link with Jewish Power.

Who is Meir Kahane?

Quick trip through his childhood: He was born Martin Baruch Kahane in Flatbush, Brooklyn, in 1932, and grew up a member of youth group affiliated with Revisionist Zionism. Founded by Zeev Jabotinsky in 1925, the Revisionists were the more militant wing of the Zionist movement, insisting its Labor movement rivals were too passive in efforts to establish a Jewish state in all of the land of biblical Israel.

New York City was a racial and an ethnic powder keg in the late 1960s. In May that year, in the aftermath of a racially charged New York City teachers strike that set African-American parents against a largely Jewish teachers’ union, Kahane and two pals decided to form the Jewish Defense League. The first ad for the JDL appeared in The Jewish Press: “Anti-semitic Black racists are battling for control of cities,” the advertisement claimed. Kahane’s JDL would go on to fixate on supposed examples of black anti-Semitism.

Plenty of Jewish groups battle anti-Semitism. What made the JDL different?

Kahane believed his JDL would fight for the “forgotten Jew” that the American Jewish establishment had supposedly left behind, and that the JDL would inspire young Jewish men to fight back when they saw what they perceived as anti-Semitism.

Kahane would popularize the slogan “Never again!” (also the title of his manifesto) long before it became a rallying cry for Holocaust memory and numerous other movements. For Kahane, when another Holocaust came around — and it would, he believed — Jews would be ready to fight back.

Kahane saw the threat to Jews not only from black militants at home in New York, but in worldwide communism — remember, this is the Cold War era — and the plight of Soviet Jewry.

Yes, the Soviet Jewry movement was sort of Kahane’s claim to fame in America. And by fame, we mean violence.

In the early 1970s, Kahane led the JDL in a domestic terror campaign of bombings, in addition to civil disobedience tactics (sit-ins, demonstrations, harassment) to put pressure on the Soviet Union to allow Jews to emigrate. (Here’s one report in JTA, from 1971, of the firebombing of a Soviet attache’s car.)

In July 1971, Kahane stood trial for violating the Federal Fire Arms Act of 1968, entered a guilty plea and was placed on five years federal probation. Two months later, he and his family immigrated to Israel.

Kahane did not found the movement to free Soviet Jewry — the Student Struggle for Soviet Jewry was launched in 1964 by New York college students  — but Kahane and the JDL raised the profile of the issue in American politics.

Yossi Klein Halevi, a former member of the JDL who has since denounced the group, explained in an interview, “Kahane’s classic line was ‘It’s time to take the Soviet Jewry issue out of the obituary pages and onto page 1.’ And he did. He put the Soviet Jewry movement on page 1.”

OK, now Kahane’s in Israel. What does he do there?

After arriving in Israel, he soon pivots to Israeli politics, with a brief one-year hiatus in American prisons, when he returns in 1975 and violates his parole.

He founds a political party called JDL-Israel that he quickly renames Kach (“Thus”). He continues with what he knows best: anti-black racism. The first action he takes is related to the Black Hebrew Israelites cult in Dimona: In October 1971, JTA reported on a Kahane speech about “guarding Israel’s honor” against “insults” from the Black Hebrew community.

Soon he moves on to targeting the Israeli-Arab community and Palestinians. In August 1972, Kahane and the JDL distribute fliers in Hebron calling for the mayor to stand trial for his alleged part in the 1929 Hebron massacre.

When does Kahane run for office?

First, however, there is some drama. In June of ’84, ahead of the July elections, Israel’s Central Elections Committee votes to ban Kach from participating in the elections. It cites Kahane’s call for deportation of Arab and Druze citizens, and his characterization of Israel’s Declaration of Independence as a “schizophrenic document.” It is, as JTA reports, “the first time in Israel’s history that a Jewish political faction was banned from an election.”

Kahane leads an appeal to the Supreme Court, arguing that a political faction can be barred only if it poses a danger to the existence of Israel. He calls the committee’s ruling political bias. The court rules that Kach can run.

Whoa. How’d he get elected after all that?

In the lead-up to the ’84 elections, Kahane’s profile in Israel rises. In April 1982, following the Egypt-Israel peace treaty — Israel agreed to give back the Sinai in exchange for peace — a group of his followers refuse to evacuate a settlement in Yamit, in the Sinai Peninsula. Some of the more extreme protesters threaten to take their own lives rather than leave.

At the request of Prime Minister Menachem Begin, Kahane intervenes to negotiate a resolution to have them evacuate. Somehow this leads to a rise in Kahane’s popularity, and also a near-universal condemnation of Kahane by Israeli parties across the spectrum, American Jewish groups and the Chief Rabbinate.

What is Kahane’s platform?

Mainly it’s no Israeli citizenship for non-Jews and expelling the Arabs from the country and the territories controlled by Israel. He also wanted to ban intermarriage and sexual relations between Jews and non-Jews. A Kach advertisement in May 1981 warns of Jewish women being seduced by Arabs, and proposes prison sentences for “every Arab who has sexual relations with a Jewish woman.”

Kahane also demanded Jewish sovereignty over the Temple Mount, but the anti-Arab ideology was the major plank.

So what does Kahane do in the Knesset?

Lawmakers immediately move to introduce an anti-racism bill to stop Kahane from using his platform as a means to expel Arabs from the parliament. Mayor Teddy Kollek of Jerusalem tells Knesset members that Kahane undermines “the basic moral tenets of the state.” Knesset members also boycott Kahane’s speeches. No one wants him there. Except, of course, his supporters.

A month after his election, Kahane tries to visit an Israeli-Arab village, Umm El-Fahm, to “encourage” its inhabitants to immigrate. Israeli police block him from entering. Prime Minister Yitzhak Shamir calls the “Kahane phenomenon” “negative, dangerous and damaging,” and Attorney General Yizhak Zamir warns Knesset members in November 1984 that it is “shameful, disgusting and dangerous.” Yet Kahane’s mere presence in the Knesset increases his popularity in Israel, with many feeling like he is speaking a truth that others won’t.

So does he get re-elected?

In July 1988, Kahane is suspended from the Knesset for threatening an Arab member with a noose. Yes, a noose.

A few months later, Kach is banned from competing in the elections that year. (In 1985, a year after Kach is allowed to run and Kahane is elected, the Knesset passed an amendment to the Basic Law, Israel’s not-quite constitution, barring parties “engaged in incitement to racism.” This includes Kach.) Polling at the time shows the party winning some 100,000 votes — three or four seats.

In October 1988, Kahane appeals to the Supreme Court, saying “I am neither a Nazi nor a racist.” His appeal is rejected and the Kach election ban stands. (Kahane later accuses the Likud of treason, for they are the party that stands to benefit from Kach not participating in the elections.)

What happens to Kahane?

In 1990, two years after he is deemed too racist for the Knesset, he is assassinated by a gunman in New York City posing as an Orthodox Jew.

Not directly — he is shot dead in New York speaking to a crowd of Orthodox Jews urging them to make aliyah. He is killed by an Egyptian-American and Muslim extremist, El Sayyid Nosair. Over 5,000 mourners at his funeral carry signs labeled “Never Again!” and “N’kama” (revenge), as well as Israeli flags, and chant “Am Yisrael Chai” (the people of Israel live). (Read JTA’s obituary of Kahane.)

Why does he still matter?

Four years after Kahane’s assassination, the American-born Dr. Benjamin (Baruch) Goldstein walks into the Cave of the Patriarchs in Hebron and opens fire on Muslim worshippers. Goldstein fires more than 100 rounds of bullets, killing  29 and injuring 125, before survivors beat him to death.

Goldstein had belonged to the JDL in his youth in Brooklyn and is a devoted follower of Meir Kahane. His terror attack leads the Israeli government to outlaw Kach and Kahane Chai.

So they are outlawed. End of story?

First, the legacy of Goldstein’s attack is still painful, even 25 years later.

Second, even though Kach and Kahane Chai do not technically exist, there are parties that are their ideological descendants. Most relevant for us in 2019: Baruch Marzel, Michael Ben-Ari and other Kach followers created Jewish Power in 2013.

OK, I’m with you now. Can you explain what went down with Jewish Power and Netanyahu?

We’ve finally made it full circle.

This month, Netanyahu brokered the Jewish Power-Jewish Home deal in an effort to ensure he has enough partners in the Knesset to form a ruling coalition. Knesset seats are handed out according to the percentage of the total vote, but parties must meet a minimum threshold. Individually, Jewish Power would not have crossed the threshold, but as a bloc with Jewish Home it could, ensuring Netanyahu another partner for a right-wing coalition. If the combined faction can get five seats, Michael Ben-Ari will make it into the Knesset, as he’s fifth on the list.

Netanyahu defends his overtures to the Jewish Power party as a standard political maneuver, likening it to left-wing parties partnering with non-Zionist Arab groups to form their own coalitions. But the backlash to the move is widespread, especially among American Jews, who think Kahane’s legacy taints Israel’s image abroad.

Even the American Israel Public Affairs Committee, which hesitates to interfere in Israel’s internal politics, dittoes a statement by the similarly non-confrontational American Jewish Committee, saying “The views of Otzma Yehudit are reprehensible. They do not reflect the core values that are the very foundation of the State of Israel.”

So what does this all mean?

Kahane’s legacy is alive and well in Israel.