Jeremy Corbyn was hit by an egg at a mosque. This rabbi comforted him. 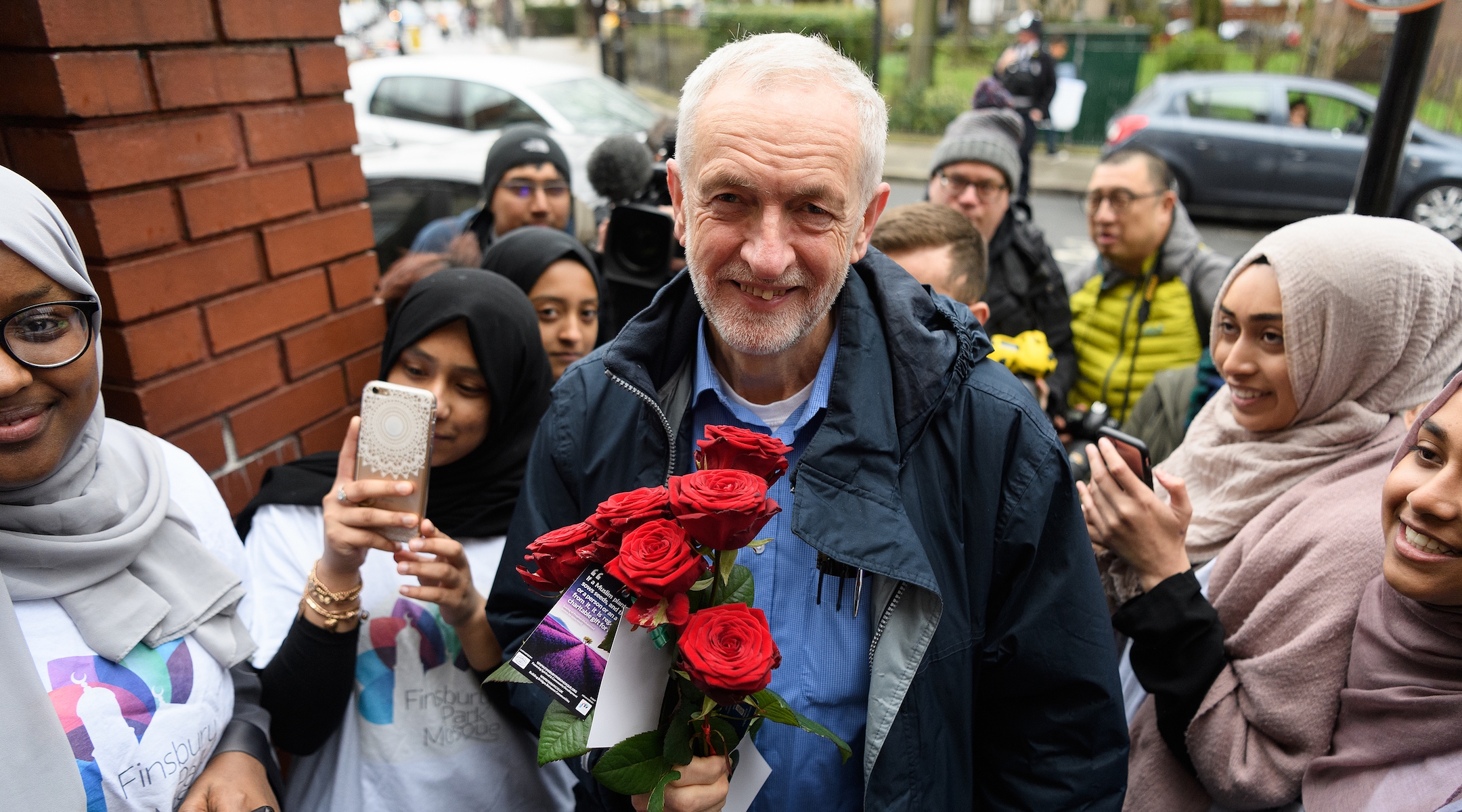 (JTA) — Jeremy Corbyn was hit with an egg while visiting a London mosque, an incident that brought little sympathy from critics of the embattled British Labour Party leader — but an unlikely assist from an Orthodox Jewish first responder.

A 31-year-old man named John Murphy was charged with assault in the episode at the Finsbury Park Mosque on Sunday. Murphy was protesting Corbyn’s stated opposition to Brexit.

Corbyn, uninjured when he was hit from behind, continued on with his planned activities for the annual Visit My Mosque Day. But the incident gave critics a chance to unload yet again on Corbyn, who British Jewish leaders accuse of being an anti-Semite — for sympathizing with anti-Israel causes and Hamas members in the past as well as not doing enough to root out anti-Semites from the party.

Rachel Riley, a Jewish television host, retweeted a comment written in January about an incident involving former British National Party leader Nick Griffin, who was pelted with eggs at a news conference, saying that “I think sound life advice is, if you don’t want eggs thrown at you, don’t be a Nazi.”

The deputy chairman of the U.K.’s Conservative Party, James Cleverly, posted on Twitter a GIF of a bomb going off with the word “boom.”

But Rabbi Herschel Gluck, the 61-year-old head of London’s Shomrim Jewish security force, wasn’t laughing. Gluck rushed to the scene to comfort Corbyn and implore him to start using security guards for protection.

“The egg wasn’t thrown,” said Gluck, whose approximately 30 Shomrim volunteers have been patrolling heavily Jewish parts of northern London for over a decade. “It was smashed on the back of his head. The perpetrator made physical contact. It was a very serious incident.”

Gluck, a haredi Orthodox Jew who sports a dense white beard and a broad black hat, said he was called to the Finsbury Park Mosque immediately after the incident by Muslim community leaders with whom he works frequently on “issues of mutual concern.” 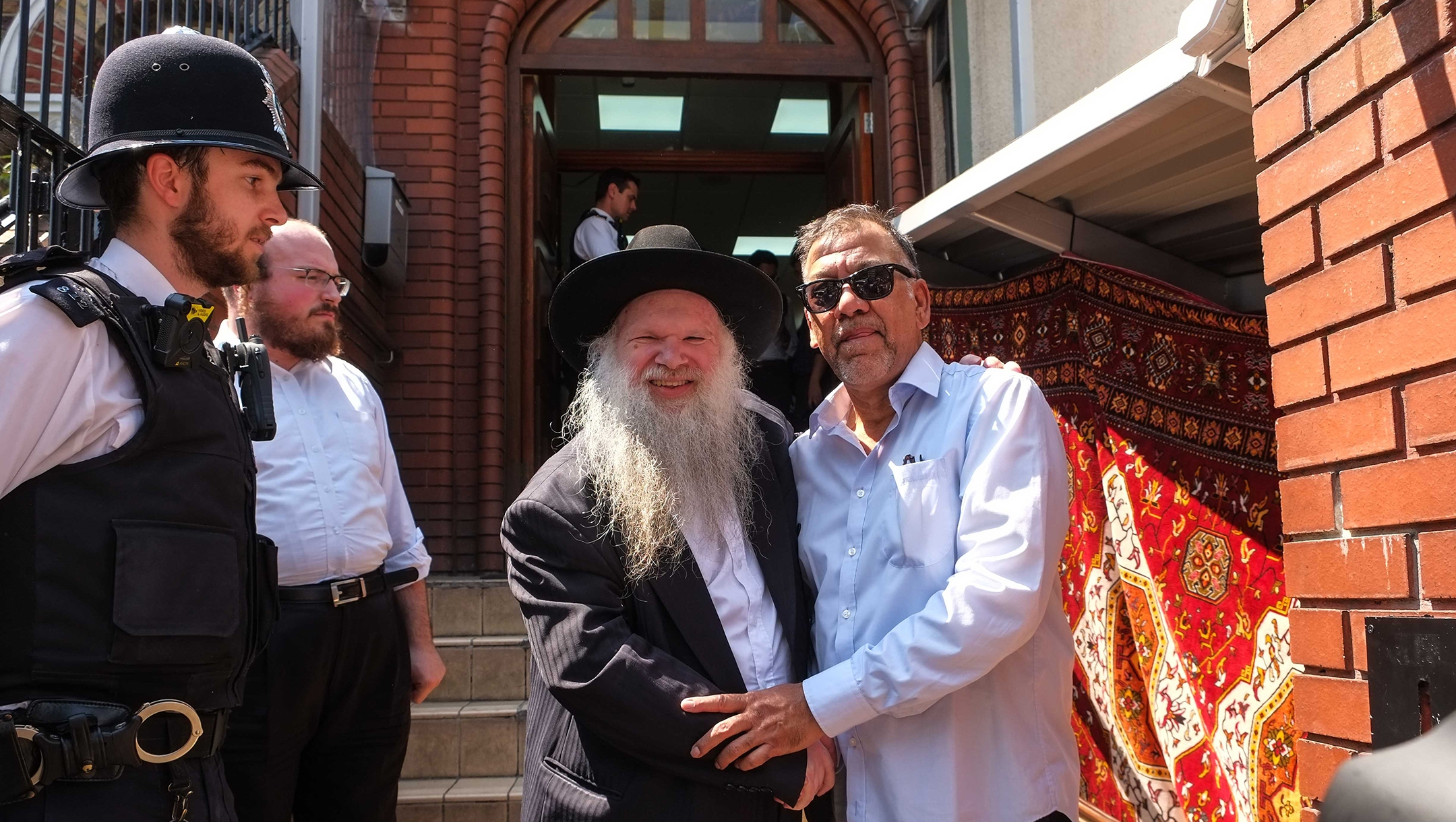 Rabbi Herschel Gluck shakes hands with a member of the Finsbury Park Mosque the day after a man drove a white van into a group of people on their way home from prayers, June 19, 2017. One person died and 10 were injured. (Claire Doherty/Pacific Press/LightRocket via Getty Images)

“Understandably because this time it was an egg, next time it could be a knife,” the rabbi said. “He has no security. I told him this should change, offered words of comfort and sat down with him for a while to get everything back to an equilibrium. I think he was glad to speak. He seemed genuinely happy to speak to me.”

The mosque in question is a sensitive location: In 2017, a far-right terrorist drove his truck into a crowd of people outside the building, killing one person. The incident happened one year after another Labour politician, Jo Cox, was murdered in Liverpool by a far-right extremist ahead of the Brexit vote.

“Especially against this background, the incident involving Mr. Corbyn cannot be taken lightly, no matter what one thinks of his views or positions,” Gluck said.

Gluck was knighted in 2013 for his interfaith work with Muslims and Christians, and has served as a mediator for the Next Century Foundation in international conflicts including Sudan and the Balkans. He said he understands why some British Jews even after the incident don’t have a lot sympathy for Corbyn.

The Labour leader in 2009 invited Hamas and Hezbollah representatives to the British Parliament, calling them his “friends.” He has repeatedly called for boycotting Israel and in 2013 defended an anti-Semitic mural. In 2014, Corbyn placed a wreath on a monument for Palestinian terrorists who murdered 11 Israeli athletes and coaches at the Munich Olympic Games. And in 2015, he said that British-born “Zionists” don’t understand English irony.

Corbyn has dismissed suggestions that his leadership of Labour since 2015 has turned the party from what once was the political home of British Jews to a movement in which thousands of cases of anti-Semitic rhetoric are recorded each year.

As for Gluck, he says he does not think that Corbyn “is responsible for anti-Semitic rhetoric in Labour.”

“I think Mr. Corbyn could and should do more to stop it,” the rabbi said. “But I don’t think he is causing the anti-Semitism.”

Still, none of that crossed Gluck’s mind when he showed up on the scene.

“My concern, my training and my goal was trying to help a person in need, which is what Shomrim is all about,” he said.

“Politics doesn’t even enter how we respond to violence and human distress,” Gluck said. “All the politics, that all happens later.”