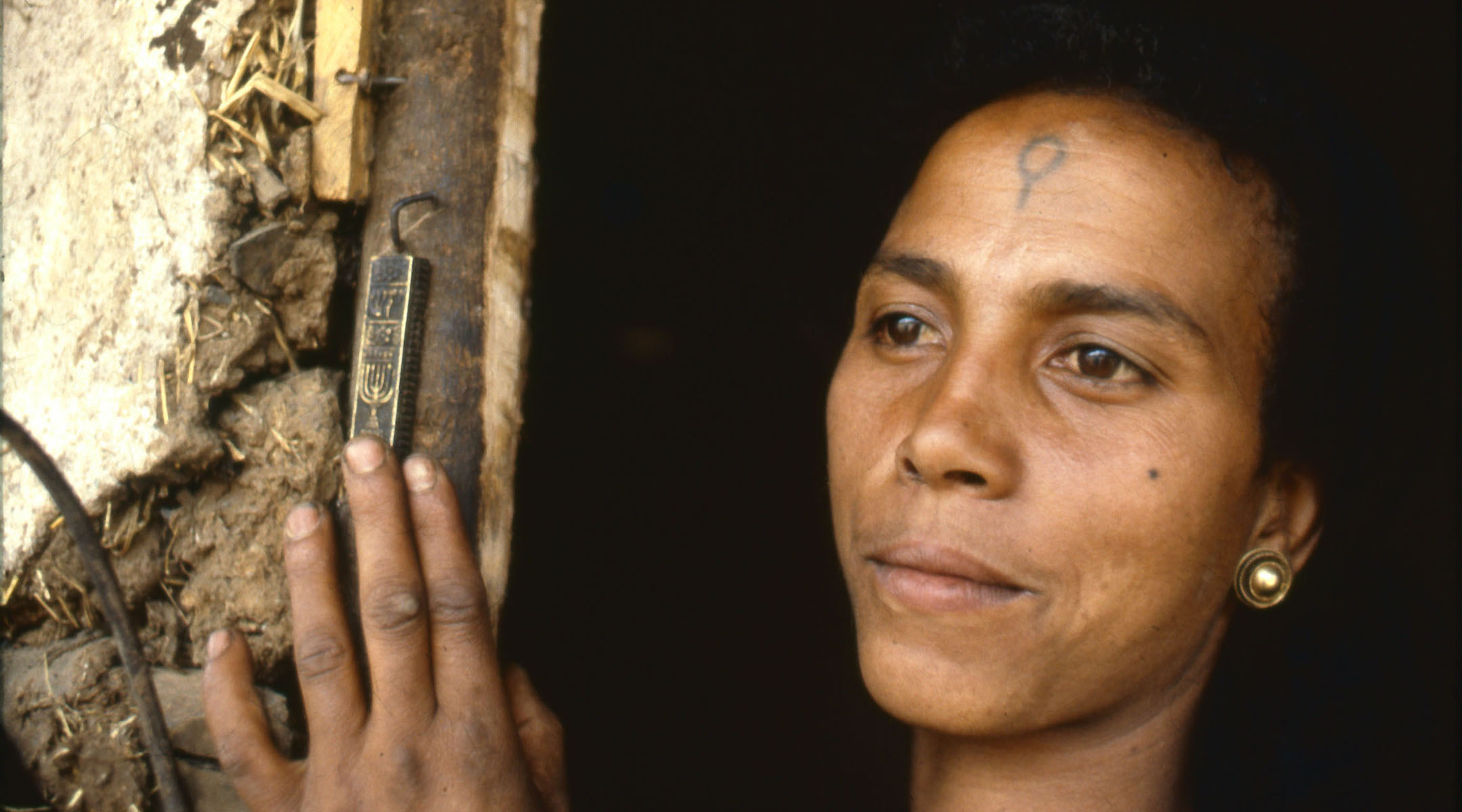 Berchko Adela as a young girl in Ethiopia, before Operation Moses. Now 68, she is a married mother of five and lives in Ashdod, Israel. (Doron Bacher, 1984)
Advertisement

CAPE TOWN (JTA) — In 1983, when Danny Abebe was 9 years old, his Jewish family decided one Rosh Hashanah night to leave their remote village in Ethiopia — with some 700 others — due to war and a series of famines that had wracked the country.

Danny didn’t know it then, but he was part of the historic Operation Moses, the secret airlift by the Israeli government of some 7,000 Ethiopian Jews to Israel over seven weeks between 1984 and 1985. At the opening of “Operation Moses: 30 Years After,” an exhibition at the South African Jewish Museum that showcases the stories of 10 such individuals — he spoke of the heartbreak faced along the way.

Gavin Morris, director of the South African Jewish Museum, said an important element of the exhibition is that it acknowledges the Jewish presence in Africa over two millennia.

“There’s a tendency to think of Jews in this day and age as white, middle- or upper-class people, where the reality historically has always been very different,” Morris told the Jewish Telegraphic Agency.

“We bring a lot of African schoolchildren through the museum – I’d like them to see that Jews are not homogenously white, Ashkenazi, middle-class people, but that we are a very diverse culture and community and the lived experience of the Ethiopian Jews is much closer to their known experience and is maybe something that would resonate a bit more closely.” 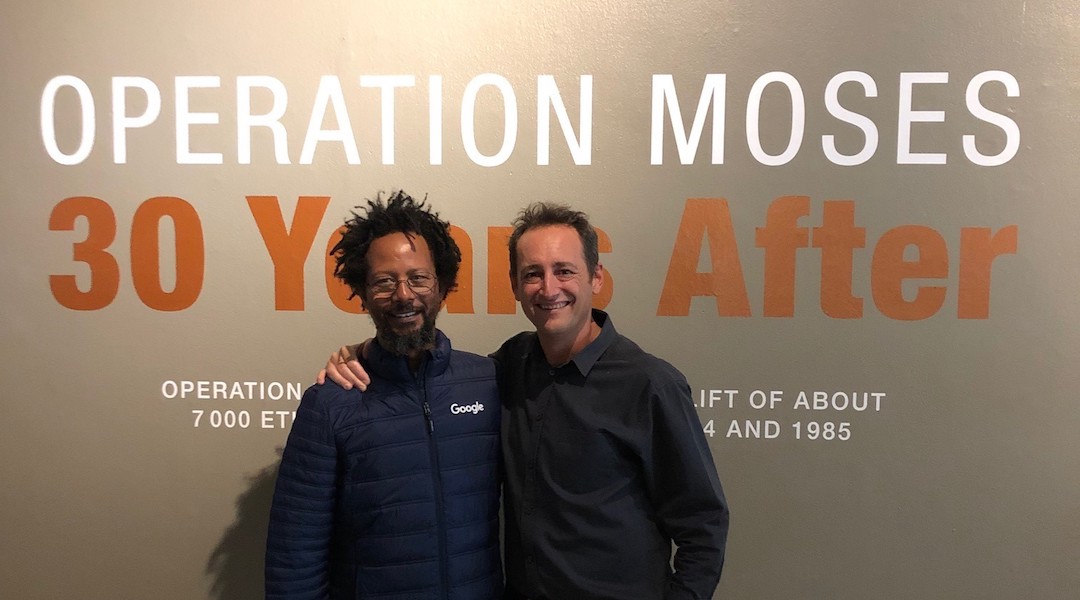 Danny Abebe, left, and Gavin Morris, director of the South African Jewish Museum, at the opening of the Operation Moses exhibition. (Beit Hatfutsot)

“As we are the sole remaining major Jewish community on the continent, it is beholden on us as the South African Jewish Museum to be representative of the Jewish experience in Africa,” Morris said.

Some of the exhibition’s themes — such as racism and cultural gaps — are common to both South Africa and the Ethiopian experience in Israel. As one of the panels reads, though the number of Ethiopians marrying out of their community has increased in recent years, these couples can face “considerable challenges.”

One of the Ethiopian Israelis profiled in the exhibit — Shay Yosef, 36 — feels that “prejudice prevents him from finding a job in his profession but cherishes his Ethiopian roots and aims to impart Ethiopian traditions to his children.” Yosef is a qualified engineer, but works in security for the settlement of Efrat, where he lives.

Abebe recalled other challenges. His tiny village in Ethiopia was far from Western civilization.

“I had never heard of the State of Israel, only Jerusalem – my father always told us about it,” he recalled.

From being “a very primitive shepherd boy,” as he described it, Abebe became a journalist at Yediot Acharonot and today is the Johannesburg-based shaliach, or emissary, for the Habonim Dror Zionist youth movement. He calls the trajectory “crazy.”

Three years ago he took his children — three were born in Israel and one in this country — back to his village.

“They were shocked,” Abebe said. “It was so far from computers, tablets.” But, he reflects, the life was “good, simple and nice.”

What he felt was missing from the exhibition, presented in collaboration with the South African Zionist Federation and which is on loan from Beit Hatfutsot, the Museum of the Jewish People in Tel Aviv, was the depth of suffering of those who made the journey — and those who didn’t survive.

The day before the group arrived at the Sudanese border all those years ago, Abebe’s aunt died, leaving three small children.

“That was the first time I saw my father cry,” he said.

“We left her on the way – Mossad [Israel’s intelligence agency] said we had to continue.”

Nor does the exhibit mention the refugee camp in Sudan where Abebe lived for a year.

“It was really, really hard for us – I would like to see the real life suffering portrayed in the exhibition,” he said.

“I saw a lot of people passing away every day from disease. We had a small holocaust in Sudan – we lost 4,000 people” on the journey due to violence and illness. “I have to say — it’s very hard to be here.”

So traumatic was the experience in Sudan that his father had refused to speak about it over the years.

“Only five, six years ago, one night I called him to ask him something,” Abebe said. “He told me, ‘Adeno, I’d like to tell you what happened there.’”

Adeno was Danny’s birth name, Daniel the “very American” name the Jewish Agency decided to give him, he said. 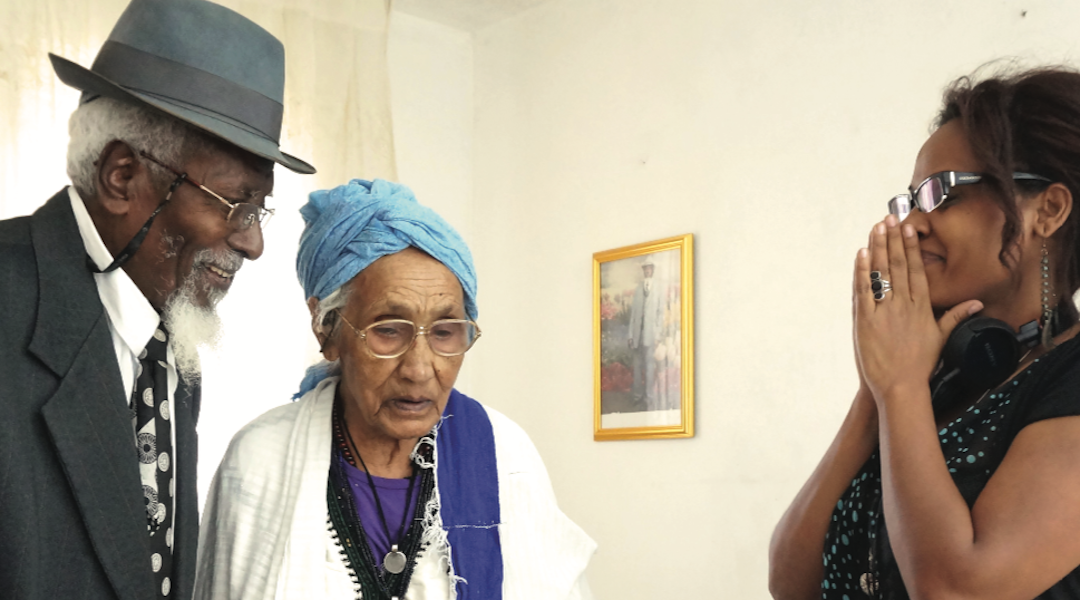 A photo from the exhibit shows Ethiopians who were part of Operation Moses. (Roni Katzenelson, 2014)

The challenges did not end, however, when they arrived in Israel.

“The gap between us and Israeli society was at least 100 years, even more,” he said. “Two days after our arrival, the Jewish Agency took us to an apartment in Arad and put us on the sixth floor. It was the first time I had seen a building, fridge, gas, a toilet – for us it was a big challenge.”

Abebe’s mother had integrated into Israeli society much better than his father, a phenomenon he says is echoed across much of the community.

“My father is in Israel, but he’s still in Ethiopia. After 35 years, he doesn’t speak Hebrew and has never worked,” Abebe said, adding that no training or education had been provided to ease his passage from a primitive, rural lifestyle.

In a 1996 report, Israel’s Ministry of Absorption said that middle-aged and older immigrants from Ethiopia had much lower employment rates than other Israelis, with the gap widening with age. The report also acknowledged the need for more training programs to integrate Ethiopian men and women.

The first time he himself felt like a real Israeli, Abebe recalls, was when he served as the first Ethiopian man in the Israel Defense Forces’ Army Radio.

As for his children, “for me it’s very, very important to see them like everyone [else], to give them the opportunity to grow up as Israeli, because it’s a big challenge,” he said. “I don’t care about myself.”

Referring to cultural differences between the Ethiopians and their host society, Abebe says simply that “everything was really hard.”

“Just recently, we started asking ourselves about our tradition – 35 years later,” he said. “We were so busy trying to be Israeli, but we’ve realized how important it is to keep our culture and tradition.”