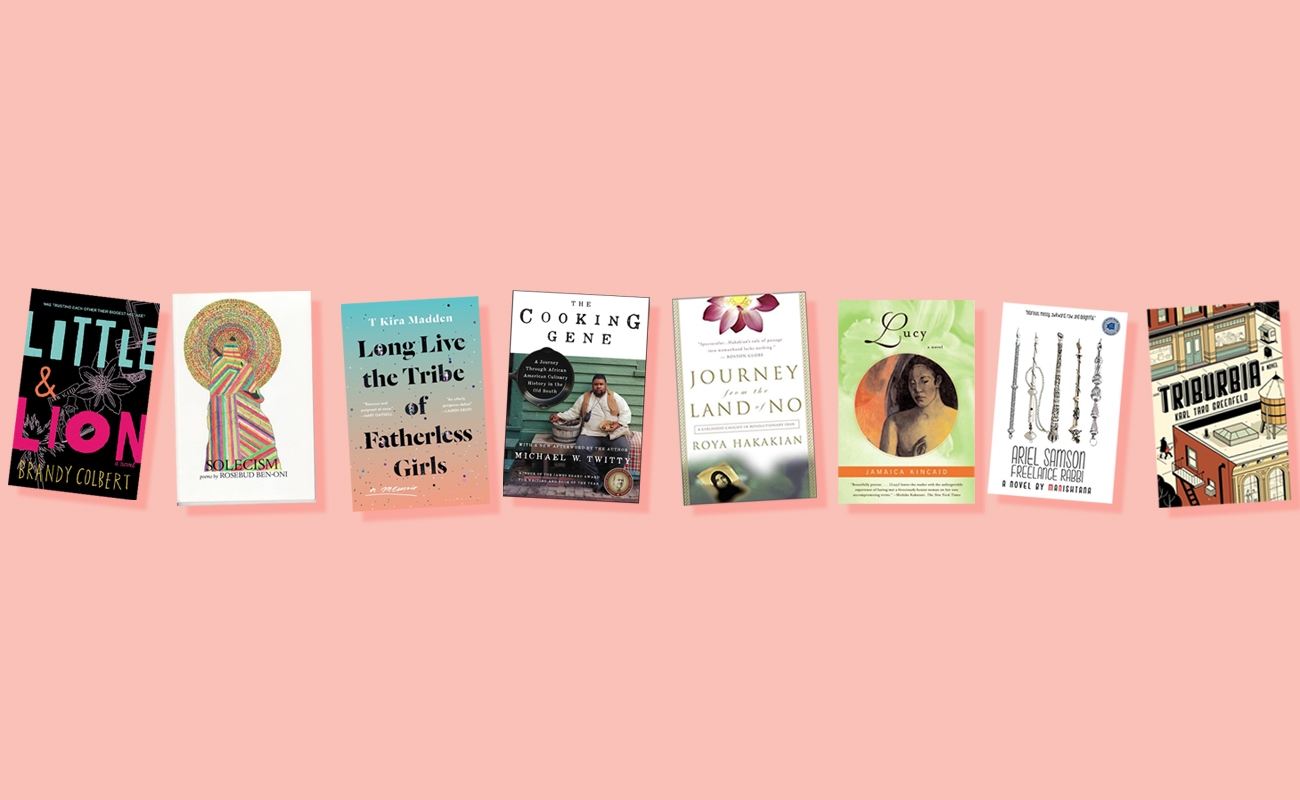 I recently decided to start writing full-time, a decision that’s been both enormously liberating and incredibly isolating. But there are some real perks to not having to be in an office all day, and one of them is getting to sit on the couch and read a good book smack dab in the middle of the afternoon.

As a black Jewish writer, I obviously want to read books written by and highlighting the stories of Jews of color. That’s easier said than done, though. It’s not that these stories don’t exist — Jewish literature is an amazing, rich genre of diasporic Jewish stories. However, the narratives of Jews of color are often left out of the Jewish literary canon, and we suffer for it.

With that in mind, I decided to make a list of books you should be reading — all written by Jews of color or featuring Jews of color. Some of the stories here aren’t explicitly Jewish, but there may be a good reason for that. When asked if he would ever write a Jewish character, mystery novelist Walter Mosley replied, “Not if he wasn’t black … Hardly anybody in America has written about black male heroes. There are black male protagonists and black male supporting characters, but nobody else writes about black male heroes.”

Jewish writers of color may shy away from writing explicitly Jewish stories for a number of reasons, like fearing that the demand for these narratives simply isn’t there. Or maybe, like Mosley, they feel more compelled to highlight the stories of groups who have been historically erased from popular narratives. Whatever the reason, though, and whatever the content of their work, these writers remain unequivocally and deeply Jewish.

I studied Caribbean literature in college, so the Antiguan-American novelist Jamaica Kincaid is one of my heroes. A lot of people don’t know that Kincaid is Jewish, and that could be because her work isn’t explicitly so. Kincaid converted to Judaism in 1993, after over a decade of being married to the Jewish composer Allen Shawn. Telling Tablet magazine of her decision to convert, Kincaid said a rabbi told her that she and her children wouldn’t be buried in the same cemetery if she didn’t. Kincaid remembers thinking, “‘What if there’s a Jewish heaven and I’m in the other heaven and I’d have to send them letters?’ I couldn’t bear to be separated from them.” After her divorce, when people asked Kincaid if she would return to Christianity, she thought it was ludicrous, saying, “People ask me if I’m still a Jew and it’s like, do you think Judaism is a fashionable skirt?”

Kincaid’s work may not be explicitly Jewish, but it’s firmly rooted in an experience that many Caribbean Jews of Color can identify with. Themes of colonial legacies, complicated familial relationships, racism, and class ripple through her writing. There are so many books of Kincaid’s to read and they’re all worth it, but I would suggest starting with “Lucy,” the story of a West Indian girl who leaves her home to work for a white family. The story is loosely autobiographical, mirroring Kincaid’s own experiences.

2. Roya Hakakian’s Journey from the Land of No: A Girlhood Caught in Revolutionary Iran

Hakakian is such an inspiring force for change. She’s a Persian-Jewish writer with bylines in The New York Times and The Wall Street Journal and is a founding member of the Iran Human Rights Documentation Center. She’s the author of two collections of poetry, in Persian, and in 2008 she won the Guggenheim prize for non-fiction.

Honestly… I could go on and on about Hakakian’s accomplishments, but her work simply speaks for itself.  I recommend immediately buying her memoir “Journey from the Land of No: A Girlhood Caught in Revolutionary Iran.” Persian Jews have one of the longest, richest Jewish histories in the entire diaspora. However, we rarely listen to or are presented with opportunities to view Persian-Jewish perspectives. The narratives and stories of all Persian Jews are deeply important, which is what makes Hakakian’s work so vital.

Now, a lot of people aren’t “into” poetry, but you should definitely check out this poet before you write it off completely. Frohman is a queer Latina with Puerto Rican and Jewish heritage. And she’s a badass poet who’s been published widely and has appeared on lots of international stages. Her bio says that her work “focuses on identity, lineage, subverting traditional notions of power, and celebrating the parts of ourselves deemed unworthy.” She’s been featured in poetry anthologies like “Nepantla: An Anthology for Queer Poets of Color,” “Women of Resistance: Poems for a New Feminism” and the forthcoming “What Saves Us: Poems of Empathy and Outrage in the Age of Trump.”

Frohman’s work is powerful, and it makes a clear message on the societal problems we face today. For example, she takes on racial hatred and gun violence in her heart-stopping poem, “The Hour Dylann Roof Sat In The Church.”

Ariel Samson, the main character in his latest semi-autobiographical novel, is challenging that invisibility merely by being present and illustrating some of the many challenges that Jews of Color face in their communities. A black Orthodox Jew, Ariel deals with racism at a Shabbat table (that also comes from another Jew of color) and he has to navigate the awful experience of seeing an Orthodox New York assemblyman wearing blackface on Purim — a situation that may refer to the real experience Rishon had with Dov Hikind, who was criticized for donning the racist costume in 2013.

5. Michael Twitty’s The Cooking Gene: A Journey Through African American Culinary History in the Old South

Full disclosure: I feel like I’ve known Michael for a long time. Even though we missed each other, we went to the same college (Howard University) and had the same adviser. Our adviser, who is Jewish, always told me how proud she was of Twitty and all the amazing things he was accomplishing. So I went through college knowing that Twitty was GOALS.

And he’s pretty awesome — making black and Jewish history every day. As a food historian, Twitty’s work focuses on retracing African heritage through Southern cuisine. His amazing book will make you laugh and cry and be amazed at the richness of African-American food traditions. Buy it. Buy it now.

Queer, Jewish, Chinese, and Hawaiian… writer T Kira Madden’s new memoir explores her unique background, growing up in Boca Raton, and having parents who struggled with addiction. Her ethnic heritage was a source of confusion and searching in her early years, but Madden says that she’s “so grateful” that her parents gave her the freedom to identify as she wished. Madden told Alma that she hopes people read her book and “… feel the power of being an outsider. I hope people can recognize some version of themselves, or some element of themselves, in the book.”

The main character here, Suzettte, is black, queer and Jewish. “Little and Lion,” a novel, portrays a tense sibling relationship that is complicated by mental illness, but Suzette’s story is also about feeling out of place. Lots of black Jews will relate to Suzette, who thinks that “people have too many questions when you’re black and Jewish.” There’s also little scenes showing the beautiful intimacy of Jewish home life, like braiding challah before Shabbat. While Colbert herself is not Jewish, she has written one of the best depictions of Jewish adolescence in the Young Adult genre. And for that, we salute her.

Born to a Mexican mother and a Jewish father, Ben-Oni graduated from New York University and did postgraduate research at the Hebrew University of Jerusalem. I love this poem of hers, “I Guess We’ll Have to Be Secretly In Love with Each Other and Leave It At That,” which has a few Jewish references. Her poem “Poet Wrestling with Angels in the Dark” was recently commissioned by the National September 11 Memorial & Museum in New York City. You can find more of Ben-Oni’s work at The Kenyon Review blog, where she writes weekly.

Greenfeld is Japanese and Jewish and is the former managing editor of TIMES Asia and the former editor of Sports Illustrated. He wrote “Speed Tribes” after moving from Japan back to the U.S., and the novel is about parts of Japanese society that often go unexamined in the West. “Triburbia” is a novel about families in Manhattan dealing with their complicated, messy lives. Greenfeld told Kveller that he “could not have written this book before I had children” because the novel includes insightful observations about how children socialize with each other — specifically, how cruel bullying and exclusion can be at that age. Greenfeld has written many other amazing books, including the dystopian novel “The Subprimes.”

Get them here and here.