I’m an Orthodox rabbi who is going to start officiating LGBTQ weddings. Here’s why. 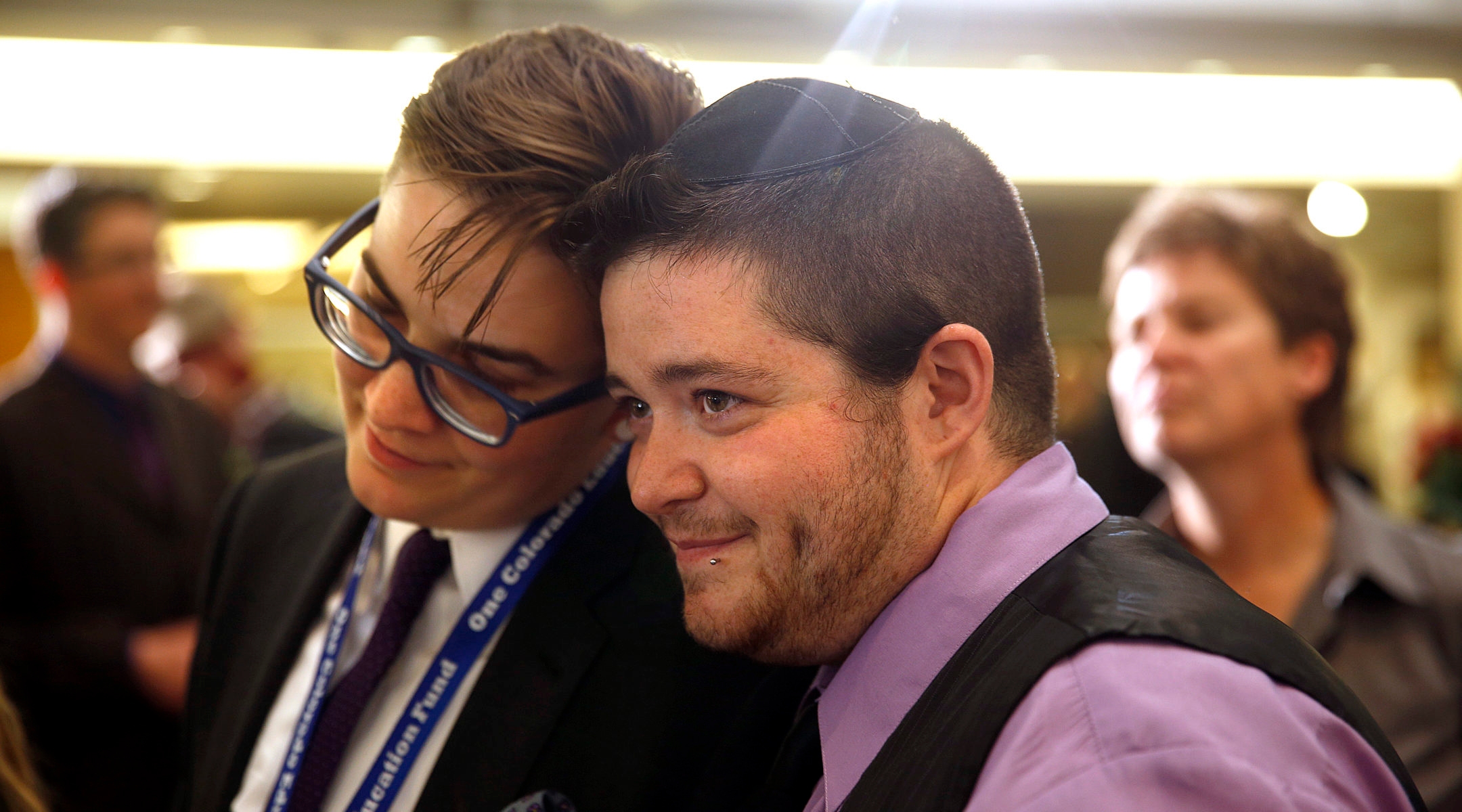 Laurel Javors, left, and Rafi Daugherty listen as another couple is issued a civil union license at a midnight ceremony in the Denver Office of the Clerk and Recorder, May 1, 2013. (Marc Piscotty/Getty Images)
Advertisement

NEW YORK (JTA) – A queer friend of mine from a haredi Orthodox background had posed a query publicly on social media. She had attended a conference on LGBTQ inclusion. There she learned a practice of certain Catholic priests who described going into gay bars in full clerical garb: They would sit in the bar, and when queer Catholics approached them, the priests would affirm God’s love and their belonging place in the church.

My friend asked her community of observant Jews, acknowledging that rabbis don’t have any identifying clerical garb: When might Orthodox rabbis do the same?

As an Orthodox rabbi myself, I was intrigued. I discovered a rainbow kippah online and decided to purchase it.

It managed to garner attention the first day I wore it. A woman took a picture of me and motioned a thumbs-up. A homeless man on the subway who was begging for money approached, pointing to my kippah, and said, “Now I like that,” and bumped my fist. A man in high heels came up to me before getting off his stop and said, “Thanks for the yarmulke.” I even had made my way to the headquarters of Chabad Lubavitch that very same day for a meeting and a Hasid asked me where he could find a kippah like mine. I surmised: The kippah works.

But what is it symbolizing and is it enough?

The kippah is a symbol of my commitment to God, to Torah and the Jewish people. To me, the rainbow kippah is also a symbol that God and Judaism love you no matter your sexual orientation.

I understand that the plain reading of Leviticus considers homosexual sex a “toevah,” often translated as an abomination. I understand that Jewish law views kiddushin, the ritual ceremony of marriage, as a legal structure between a man and a woman. I know and respect this.

But I also believe that the Torah does not want human beings to live alone, and supports a covenantal relationship between parties as they build a faithful Jewish home. I know that Judaism has, for thousands of years, had a rich understanding of the diversity of gender identities. I know that the Torah affirms the God-endowed dignity of all human beings.

In the recent film “Boy Erased,” based off Garrard Conley’s memoir describing his experience in a gay conversion program, a scene between a Baptist pastor father and his adult gay son has stayed with me. Conley’s character says something along the lines of “I’ve tried to change, God knows I’ve tried. I can’t change. Now it is your turn.”

I’ve thought about how resonant that particular sentence felt. The onus of responsibility now rests upon those of us in religious leadership positions: to continue to make space, validate, humanize, empathize and support those who have long felt suppressed by our traditions, and not the aggrieved parties themselves.

My own rabbinical school, Yeshivat Chovevei Torah, which is a beacon of progressive traditionalism, recently informed its students and alumni that one of its fourth-year students, an openly gay man, will not be receiving ordination a few months shy of graduation after years of study at the seminary. It’s a painful reminder that LGBTQ Jews still lack the ability to fully participate as equals in all facets of Orthodox life.

That is why, going forward, I will be officiating wedding ceremonies for queer Jews.

I’m passionately committed to God, Jewish law, Torah and the Jewish people. These won’t be “kiddushin” ceremonies, but similar to the brit shutafin (covenantal partnership) ceremonies the visionary Rabbi Steven Greenberg, founder of Eshel, has been performing for years.

I understand that for some, this may feel like a blatant break from tradition, and I know some of my teachers and the larger Orthodox community believe that this is crossing a line that should not be crossed.

Yet I know that there is a small but growing number of Orthodox rabbis from across the Modern Orthodox spectrum who believe that this is where we have to be moving. I hope that in doing so as a community, queer Jews will see themselves as valued in the community and see that their rabbis are ready to celebrate their life choices of sacred covenantal marriage as well. It is not only about upholding the dignity of the human being, but upholding the dignity of the Torah itself, which emphasizes the need for loving partnership.

A wedding day should be a joyous day for loving companions, as liturgy connotes, regardless of their sexual orientation. If the couple is choosing to live Jewish lives, build a Jewish home and raise Jewish children, our traditional rabbinate must seize the opportunity to welcome and work with these families at their most precious life-cycle moments. If we don’t, we risk further alienation and falling into an abyss of religious irrelevance by denying these couples their rightful place of belonging.

Shouldn’t our Orthodox communities rush at the opportunity to keep as many Jews engaged in their Judaism? Is this the Torah and this its reward?

We are long overdue for a new paradigm. I am humbled to be part of a new generation seeking to straddle the sacred tradition we inherit as well as the humanity before us.