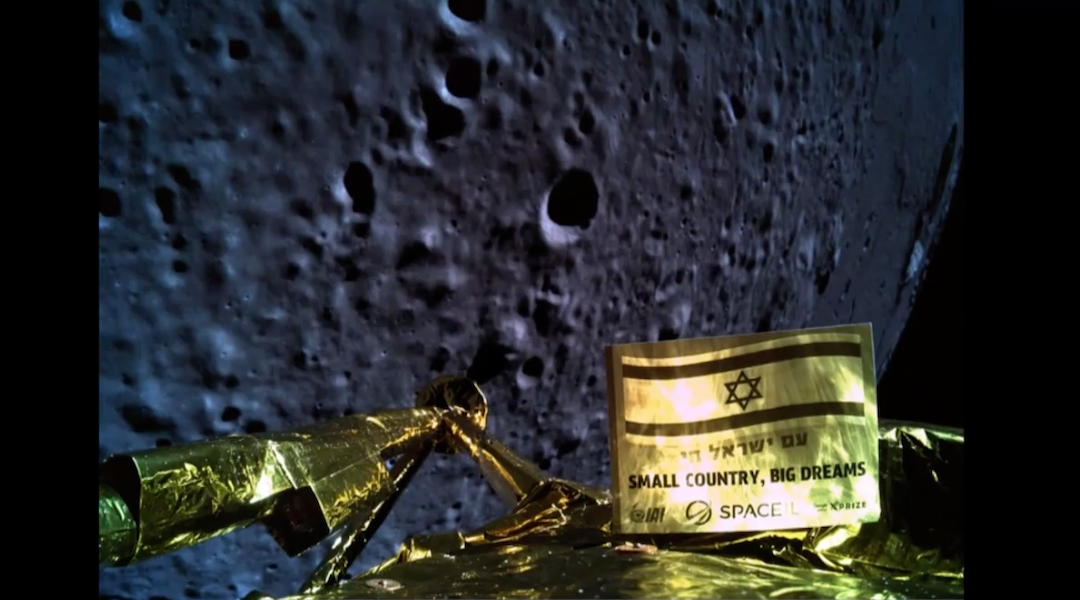 Israel's Beresheet spacecraft took this "selfie" as it attempted to land on the moon. (SpaceIL/YouTube)
Advertisement

JERUSALEM (JTA) — The Israeli spacecraft Beresheet crashed while attempting to land on the surface of the moon.

“If at first you don’t succeed, try again,” Prime Minister Benjamin Netanyahu said from SpaceIL’s control room in Yehud, in central Israel, on Thursday. He vowed that Israel would attempt the moon landing again in the future.

At least 95,000 viewers tuned in to a live broadcast of the control room on YouTube, and the hundreds of chat messages a minute indicated that they were watching from throughout Israel, the United States and several other countries. Beresheet means Genesis in Hebrew.

About 200 children and parents gathered at President’s Reuven Rivlin’s residence in Jerusalem to watch the landing.

Although it didn’t complete its mission, Beresheet helped Israel become the seventh country to have a spacecraft orbit the moon.

“We don’t have to be disappointed. We should congratulate ourselves on what we have achieved,” Rivlin said.

Later he added, “Sure we didn’t land exactly like we wanted, but we landed. We are on the moon!”

The control room and its spectators, as well as Rivlin and his guests, sang Israel’s national anthem, “Hatikvah,” together following the crash.

Morris Kahn, the major funder of the SpaceIL project, said afterward that the control room confirmed that the landing had failed.

“Well, we didn’t make it, but we definitely tried,” he said. “I think the achievement of the attempt is really tremendous.”

The size of a compact car, the craft weighed about 1,300 pounds at launch, most of which was fuel. It took off from Cape Canaveral, Florida, on Feb. 21 aboard a SpaceX Falcon 9 rocket. It used the gravity of the earth and then the moon to make its way to the lunar surface, traveling over 3.4 million miles in its orbits around the earth and another 1 million around the moon.

The craft’s landing time was listed Thursday on the electronic arrivals timetable board at Ben Gurion International Airport near Tel Aviv alongside other flights.

Before the landing attempt, the SpaceIL team remembered Ilan Ramon, Israel’s first astronaut, who died in 2003 aboard Columbia when the space shuttle exploded during re-entry.