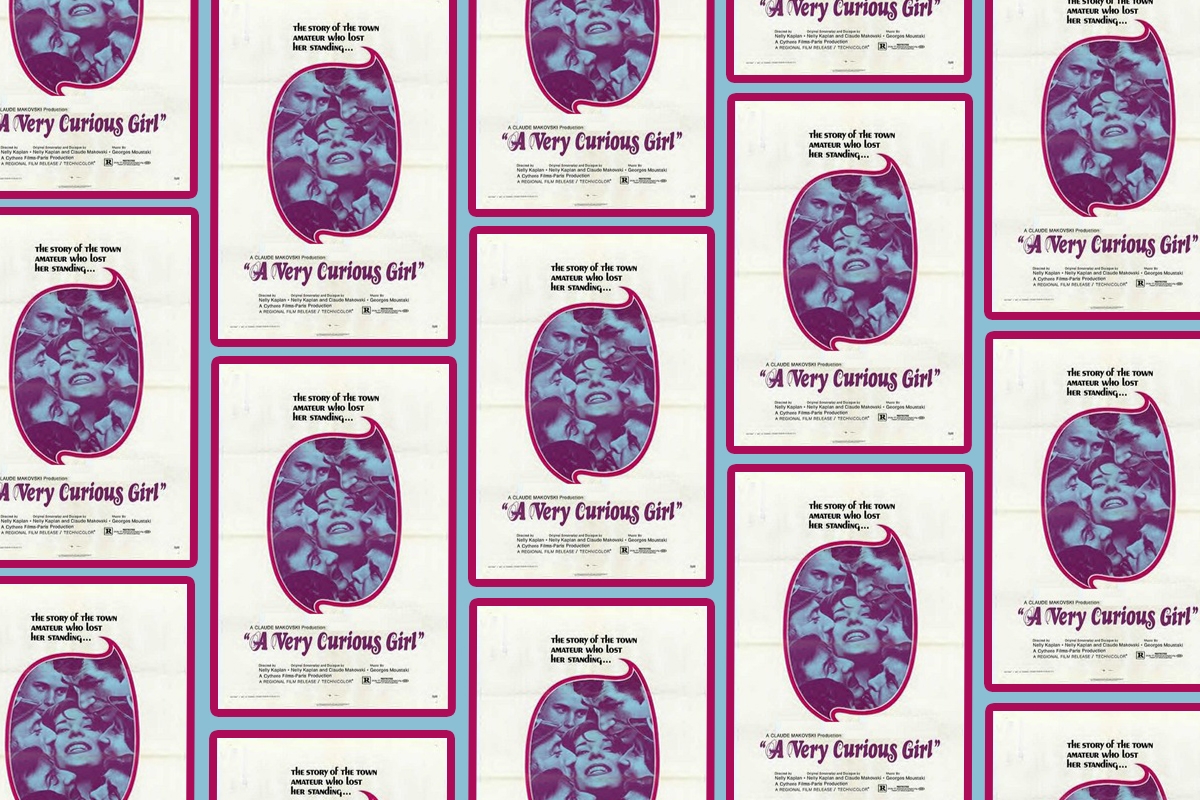 Before its premiere in 1969, a film censor told Kaplan that she had to punish the heroine of “A Very Curious Girl” for sleeping around and abusing men, lest she get an audience-limiting rating. Kaplan responded by threatening the censor with a public scandal. At the intersection of technology and witchcraft, Kaplan presents an extremely timely vision of feminine liberation, one even the censors could not repress.

When I was a 22-year-old baby film snob, I saw “A Very Curious Girl” (on VHS!) and it blew me away. I knew I had seen something not just unique but dangerous. I convinced my adviser it was a good idea to write my honors thesis on “A Very Curious Girl” (and a few other films by Jewish, French female filmmakers). Somehow she agreed. And in the intervening years, while the world heaped praise on my other chosen filmmakers such as Diane Kurys, Chantal Akerman and Agnes Varda, Nelly Kaplan barely even existed in the American cinema-going consciousness.

Kaplan, a Russian-Jewish, Buenos Aires-born immigrant to Paris in the early 1950s, made such a unique impact on French cinema that her legacy is only now being properly understood. She’s finally getting her first New York retrospective at the Quad Cinema, opening with a run of “A Very Curious Girl” as well as some of her lesser known, more experimental work. Though her Jewishness is no secret, I think it’s key to unlocking the autobiographical aspects of her work.

As an Argentine Jew, Kaplan came to Paris with an unusual perspective. On the one hand, she was acutely aware of lingering anti-Semitism in postwar France. She became mistress and apprentice to the great man of French cinema, Abel Gance. She was his muse, company actress and, most important, second unit director. One day Gance’s wife came to the set when Kaplan was playing a topless courtesan. Gance’s wife leapt at her with cries of “sale Juive,” dirty Jewess. It was clear anti-Jewish hatred had hardly been put to rest with the war.

At the same time, having come from South America, Kaplan was not tied to the trauma of recent history in the same way as those who had lived through it. In a recent interview with Joan Dupont, Kaplan reflects on the incident with Gance’s wife.

“It hurt me back then. Now it makes me laugh!” she said. “Luckily I hadn’t lived under the occupation …”

As a filmmaker, and as a Jew, Kaplan has just enough distance from recent history to be able to use it as material and make it her own with her trademark blend of sex and surrealism. This is aptly demonstrated in “A Very Curious Girl.”

The movie takes place in an isolated rural French village, where a young woman named Marie lives with her mother and her goat in a tin roof shack on the edge of her boss’ farm. The sparsely populated village of Telliers is home to a mere handful of residents, all of them unpleasant caricatures: the priggish mailman, the buffoonish herbalist, the useless parish priest. Marie works for the farm owner, a woman who treats her like an animal by day and coerces sexual favors from her by night. The rest of the villagers are no better. They see Marie as a source of free sex and/or labor, a marginal character who should be grateful that they allowed her and her mother to live in the village when they arrived during the war sans identity papers.

An isolated village, a persecuted witch on the edge of town, a midnight burial on unconsecrated ground, a goat who scares the villagers: This is not the lavender-scented fantasy Provence of American and English imagination; this is the middle of muddy nowhere, “la France profonde,” the French sticks, where the old ways still hold and anything is possible, even a feminist reversal of ancient horror tropes. In Kaplan’s imagination, it’s the witch who burns her persecutors, not the other way around.

It’s never made explicit from where exactly Marie and her mother came — they’re referred to both as witches and “gypsies.” But not only are they without papers, we find out when Marie’s mother is killed in a hit-and-run that they are both unbaptized. The village priest arrives to attend to the dead body and fretfully notes that church burial will be impossible. Those who exist beyond the authority of the Church live precariously, a fact well understood by European Jews.

In “A Very Curious Girl,” the tin roof shack on the edge of the farm is Marie’s ghetto. Her existence outside the authority of the church is both a threat to the community and a source of power. Marie and her mother are targeted as witches, just as Jews in the Middle Ages were figured as witches and wizards. After her mother is killed, the townspeople target Marie’s goat, her best friend, murdering him in cold blood by rifle shot. Instead of breaking her, the murder of the goat is the catalyst for Marie to finally transform herself into the powerful witch she is accused of being. She starts charging the villagers for what they have come to expect for free. Seizing the means of production, and sex work in particular, brings Marie newfound wealth, and with wealth comes options. The more powerful Marie becomes, the harder the villagers try to destroy her.

Kaplan spent the late 1950s and early ’60s used and ill-treated by her mentor, Abel Gance. Joan Dupont notes that in the early ’60s, Kaplan’s relationship with Gance had become intolerable. She “became pregnant with his child and went to Switzerland for an abortion. He did not help much with money … Yet she was there for him again, heading his second unit on ‘Cyrano et d’Artagnan’ (1964) in Italy and found conditions even more hellish than they’d been on Austerlitz. On Dec. 8, 1962, she wrote Gance, citing his reproaches and jealousies, declaring herself to be out of steam, à bout de soufflé …”

In “A Very Curious Girl,” the one man who treats Marie kindly is Andre, a traveling cinema salesman who sees Marie not as someone to exploit but as an equal. Andre introduces Marie to a special tape recorder that functions both as the key to her freedom and a spark to her creativity. It’s hard not to see Andre as a stand-in for Claude Makovski, the man who, after leaving Gance, became Kaplan’s lifelong creative partner as well as the producer of her two most important films, “A Very Curious Girl” and a Picasso documentary in 1967. But while Andre is kind and loving to Marie, you can’t help but cheer as she sets off by herself at the end of “A Very Curious Girl,” tossing her high heels to either side of the road as the credits roll.

(Wild Things: The Ferocious Films of Nelly Kaplan retrospective is at Quad Cinema through April 25.)