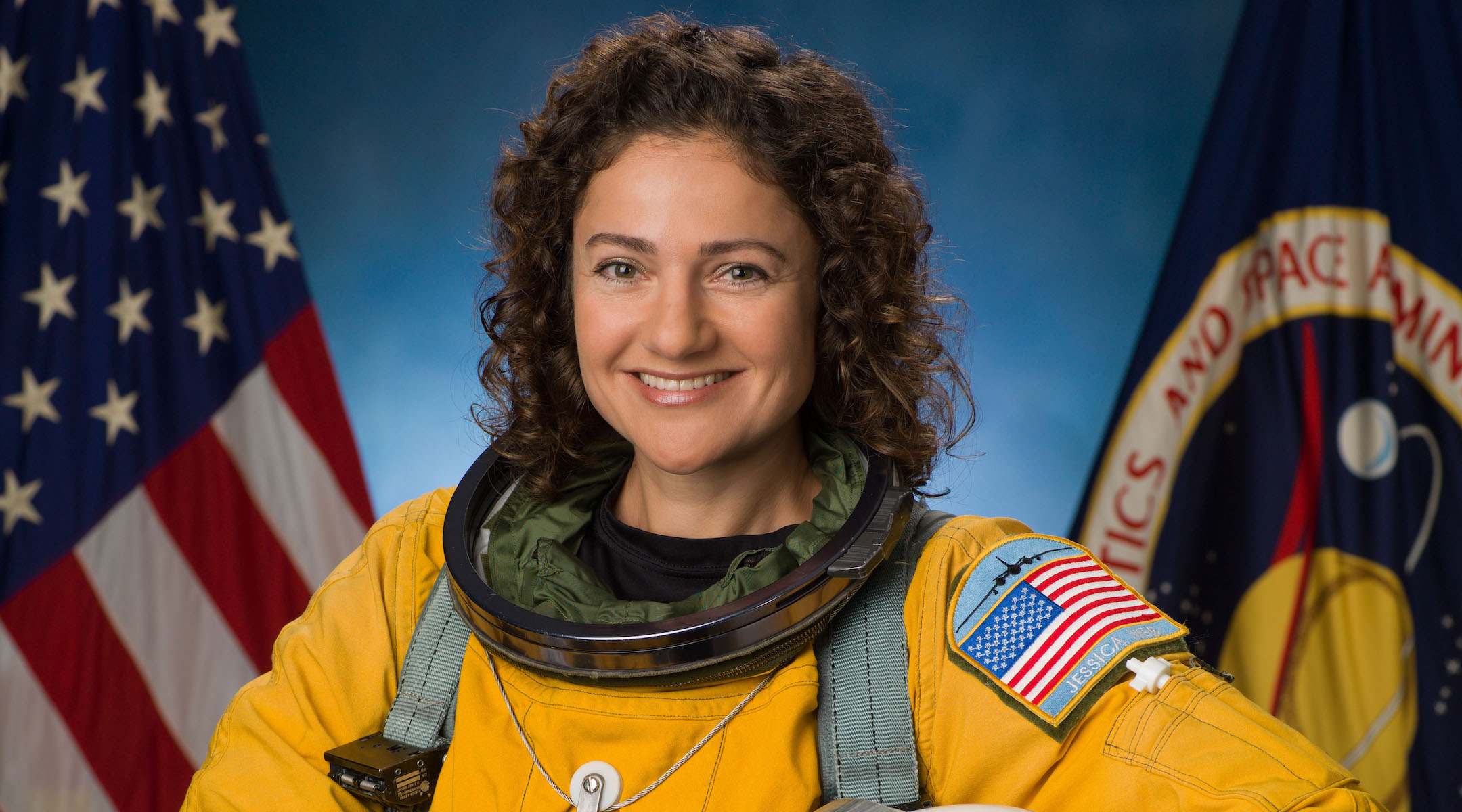 (JTA) — Jessica Meir has been preparing to go into space since the age of 5. She attended her first space camp after finishing middle school and a training program at the Kennedy Space Center following her sophomore year at Brown University.

It took Meir three tries to be chosen for NASA’s highly selective astronaut training program, which she started in 2013 and from which she graduated two years later. Last month, NASA announced that Meir will be participating in her first mission.

It still feels surreal, she told the Jewish Telegraphic Agency in a phone interview from the Johnson Space Center in Houston.

“[When] I’m sitting on that rocket about to launch, it’s really going to be then that it finally sets in,” the 41-year-old astronaut said.

On Sept. 25, Meir will co-pilot a Russian Soyuz spacecraft launching from Kazakhstan with Russian cosmonaut Oleg Skripochka. They will be joined by Hazzaa Ali Almansoori, the first astronaut from the United Arab Emirates.

Meir, the daughter of a mother from Sweden and an Iraqi-Israeli father, holds Swedish and American citizenship. She will be the first Swedish woman, the fourth Jewish woman and the 15th Jew overall to be part of a space mission.

The mission will go to the International Space Station, where Meir will perform a range of physiological, medical and chemistry experiments to better understand the ways in which being in space affects humans. Meir also hopes to do some exploring outside the space station.

“I’m very excited to participate in the science. And also the other big thing personally, my dream has always been to go for a spacewalk,” she said. “There’s never a guarantee — things can always change with the mission when we get up there — but right now per the current plan I will be doing spacewalks as well.”

Meir has spent the last year preparing for the mission. That includes learning Russian and training trips to Russia. She has run on an anti-gravity treadmill used to prevent muscle loss in space. She’s had to analyze her food intake and there’s been a range of medical tests.

The youngest of five children, Meir spent her childhood in Caribou, Maine, though her parents grew up far from there. Her late father was born in Iraq but immigrated with his family to prestate Israel as a young child, later fighting in the country’s War of Independence in 1948. He went on to become a doctor and take a job in Sweden, where he met Meir’s mother, a nurse who was raised in a Christian Swedish family. The couple moved to Maine when Meir’s father was offered a job there.

Though Meir’s mother did not convert, the family identified as Jewish and attended synagogue in the nearby town of Presque Isle. Living in a mostly Christian town, Meir felt different at times but did not experience anti-Semitism.

She says being Jewish is an important part of her identity.

“Personally I’m not really a religious person,” she said, “but I think that my Jewish cultural background is obviously a big part of my culture and especially traditions.”

Astronauts are allowed to bring a number of personal items to the International Space Station. Two among Meir’s choices: an Israeli flag and a pair of socks with menorahs. (She is a big fan of novelty socks and will include several pair among her possessions headed for the station.)

Her piccolo, too. Meir, a music lover who also plays the piano, flute and saxophone, settled on bringing the instrument because of its small size.

Meir isn’t sure what triggered her interest in space travel. As a child, she didn’t know anyone who worked for NASA.

“Growing up, if you asked any of my childhood friends, or any of my college friends, or anywhere all the way through, people always talked about that with me, they always knew that was my thing, that’s what I wanted to do,” she said.

As part of her postdoctoral work at the University of British Columbia, Meir spent some time in the Antarctic studying a different type of flight — that of the bar-headed goose. She had previously researched oxygen depletion in diving emperor penguins in the Antarctic, so the topic wasn’t entirely off course.

One thing that stands out to Meir about her mission is the international cooperation that made it possible, including at the International Space Station, a joint project of the space agencies of the United States, Russia, Japan, Europe and Canada.

“To have that opportunity to be living and working in Russia, and training alongside the cosmonauts and launching with the Russians,” she said, “that to me, it’s really pretty amazing, especially given the climate today.”