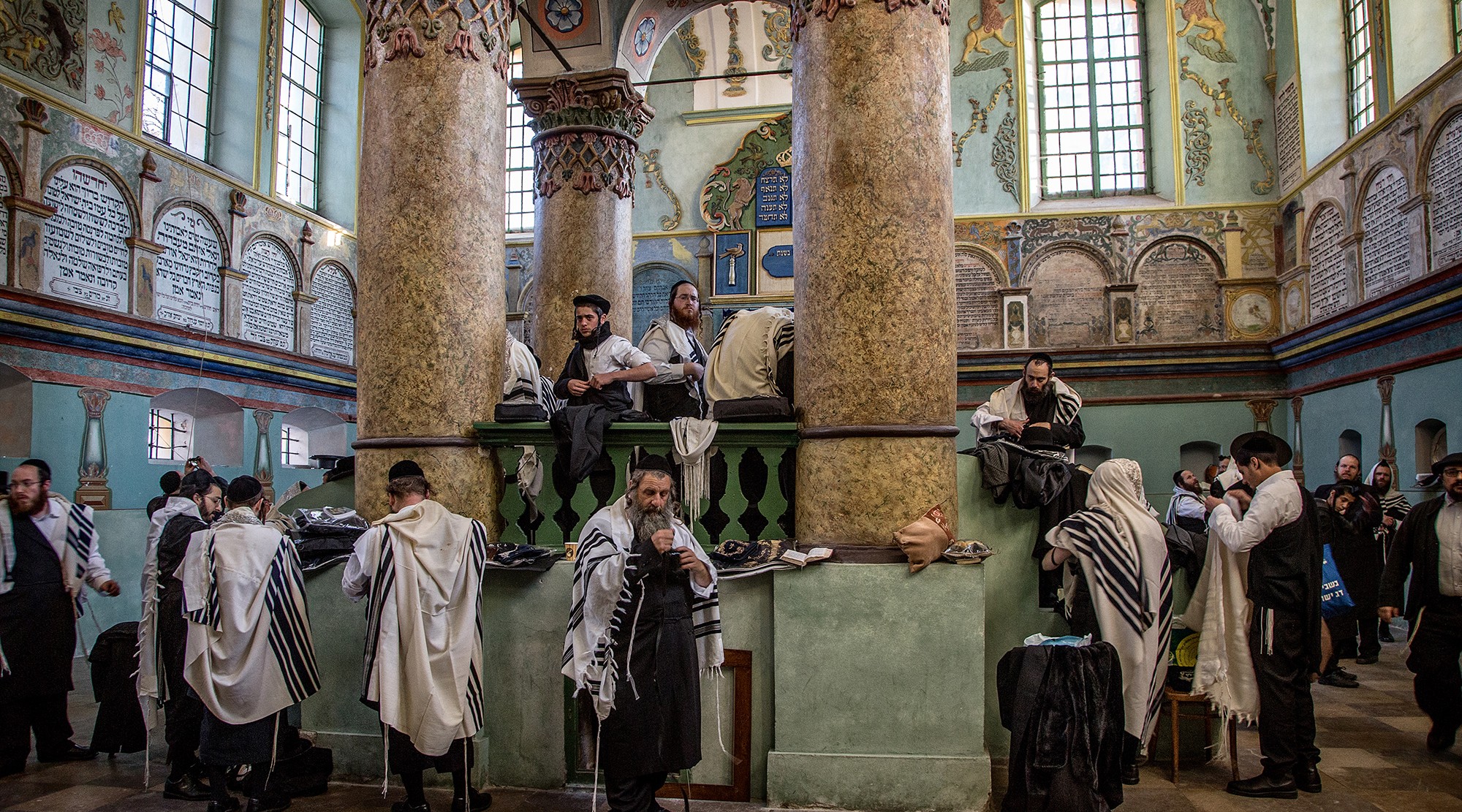 When New York natives Duvid and Naomi Singer went to Poland about a decade ago and spent some time visiting the gravesite of a revered Hasidic rebbe, they spotted something unusual beyond the 30 or so Jews reciting Psalms in the Bobowa cemetery.

“We were a little surprised to see this woman with a camera,” said Duvid Singer, who leads tours of Poland primarily for American Hasidic Jews, including Bobovers like himself. “We were kind of staring at her, and she came over to us and started asking questions.”

Naomi asked her if she was Jewish. She wasn’t.

The woman turned out to be Agnieszka Traczewska, a Polish photographer and film producer working on a project to photograph Hasidic Jews visiting historic sites in Poland. The idea was to pay homage to the history of Jews in Poland – something most Poles today overlook, she said.

“My education left me with unbelievable gaps, and one of the most significant gaps was the story of the Jewish nation, which lived with the Polish nation side by side for a thousand years and vanished in the Holocaust,” Traczewska said.

The result of her decade-long effort is a collection of photos, titled “Returns,” that Traczewska turned into a 208-page book. The collection is being exhibited as well at sites ranging from European cultural festivals to the U.N. headquarters in New York. The book focuses on the thousands of Orthodox Jews who make pilgrimages to Jewish sites in Poland each year.

We see men lighting yahrzeit candles and praying in former synagogues and outside in the rain. Everyday scenes show men smoking cigarettes and chatting at the edge of a cemetery.

The goal was to “visualize their spiritual connection to” the Jewish sites, Traczewska said.

Even though the men in the photos often live in insular communities and typically are cautious toward contact with women outside their immediate family, they not only spoke with Traczewska but also flocked to her photo exhibits and asked her to autograph their copies of her book. 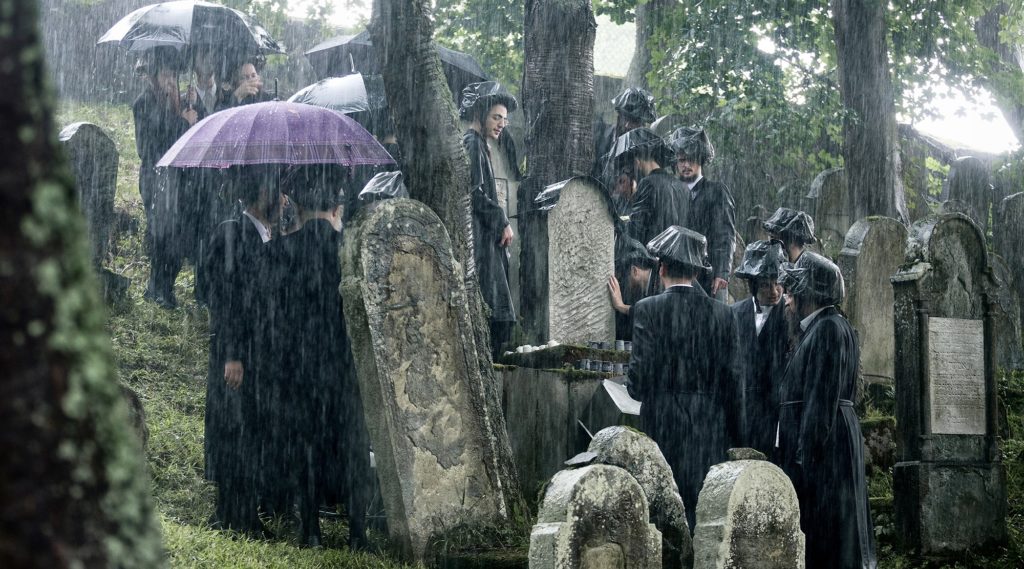 Hasidim withstand a downpour during a visit to a Jewish cemetery in the Polish town of Krynica Gorska. (Agnieszka Traczewska)

Traczewska’s work has been featured at synagogues and the Polin Museum of the History of Polish Jews in Warsaw. The photographs in an exhibit titled “Bracha-A Blessing: Back to the Polish Shtetls” have been presented all over the world. In January, they were on display at the United Nations in New York at a show organized by the Consulate General of Poland there in cooperation with Poland’s U.N. mission.

The opening included a stirring performance by a cantor that seemed to leave both Jews and non-Jewish Poles in the audience deeply moved.

Traczewska first connected with Hasidic Jews about 11 years ago, when she traveled to the small Polish town of Leżajsk while Jews were there for the yahrzeit — the anniversary of the death — of Elimelech Weisblum, a famous Hasidic leader who died in 1786. Thousands of Jews travel to Poland each year for the occasion. A Jewish friend had told Traczewska that she might find the gathering interesting.

But her friend also warned her: “For a woman with a camera, it’s not the easiest.”

But Traczewska was deliberate, taking care to dress modestly and approach her camera-shy subjects gently to win their trust.

Traczewska eventually earned access and made friends. Naomi Singer introduced her to other Hasidim on trips, and more often than not they acquiesced to being photographed.

The photographs in Traczewska’s collection are not limited to Poland. She won second place in the 2014 National Geographic Traveler Photo Contest for her image of two 18-year-olds in Jerusalem following a wedding ceremony for their arranged marriage.

Yaakov Lemmer, a Hasidic cantor from Brooklyn, connected with Traczewska after seeing her photos on Facebook. She took photos of Lemmer using a branch in an effort to clean off some illegible letters on two tombstones at a gravesite near where his grandparents lived. He thought one of his ancestors might be buried there. 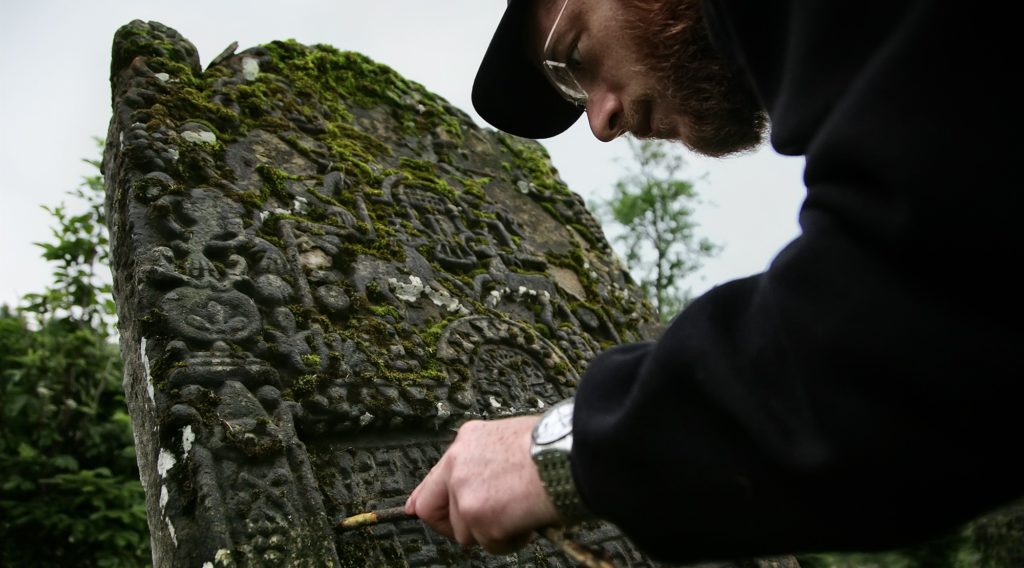 Yaakov Lemmer, a Hasidic cantor from Brooklyn, cleans off a tombstone at a cemetery in Jasliska, Poland. (Agnieszka Traczewska)

Lemmer said he was particularly moved by a Traczewska photo of a puddle reflecting a family standing outside the gates of the Auschwitz extermination camp. He said the reflection illustrates the memory of the Holocaust.

In the book, Traczewska used photos of Duvid Singer looking out the window of a Jewish center in Katowice, Poland, and his written reflection on how he and his father, a native of Poland who fled before World War II, traveled back to the country.

“My father, after reciting the Kaddish not heard in these parts for nearly 60 years, turned to me and with tears in his eyes, asked me not to allow their memory to be erased,” wrote Singer, who in 1996 started leading about four trips each year to Poland.

Traczewska has developed close friendships with the Singers as well as other Hasidim. Her speech is now peppered with Yiddish terms, as she describes how she “schlepped” on countless trips from her Krakow home to take photos in towns like Bobowa, Lelov and Radomsko – all once the homes of eponymous Hasidic dynasties.

Ultimately, Traczewska said, it was curiosity that really compelled her to acquaint herself with this community that once was such an integral part of Poland. Despite their much different life circumstances, hailing from two different worlds that coexisted long ago, the photographer and the Hasidim were able to find common ground. Traczewska was even allowed to photograph intimate moments of prayer.

She said the process that led to the exhibition was beautiful, and the connections she forged with her subjects opens a door for hope.

“Eleven years ago, if someone had told me this would be possible, I wouldn’t have believed it,” Traczewska said. “I felt like I had an obligation to my people to educate them, and toward Hasidim who shared with me so much trust and the obligation not to fail this trust.”