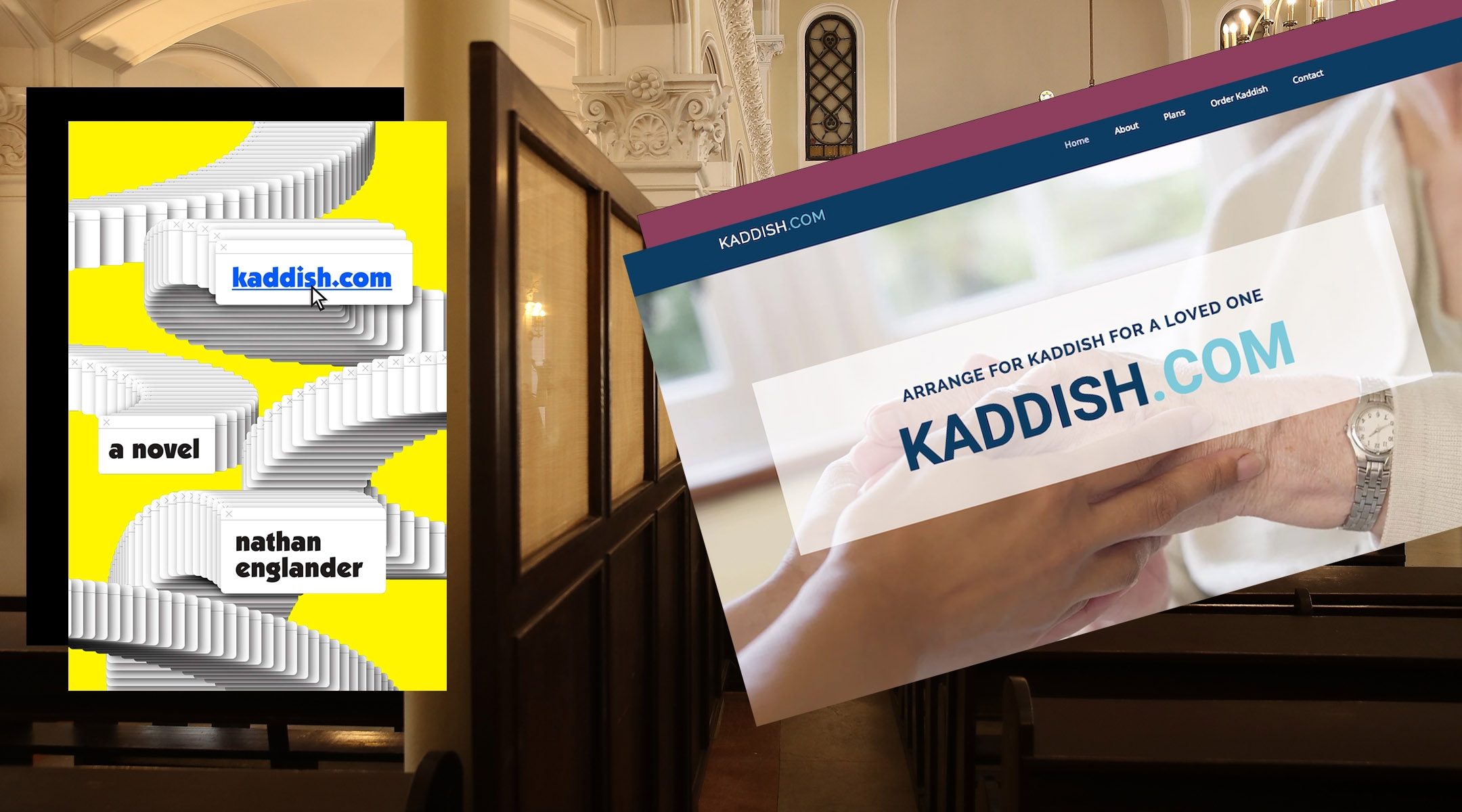 A new site offers mourners a way to have someone say Kaddish for their loved ones. (JTA montage)
Advertisement

NEW YORK (JTA) — In his most recent novel, “kaddish.com,” Nathan Englander imagines a website used by a character — encumbered by Jewish guilt — to hire someone to say the traditional mourner’s prayer for his late father.

In interviews, the author has said the idea was inspired by the very real fact that Judaism allows mourners to hire a proxy to recite the Kaddish prayer for the dead on behalf of a loved one. Englander said he had tried unsuccessfully to buy the rights to the domain name from the owner, who had yet to put up a site.

But a funny thing happened on the way to the bookstore: Soon after the publication of Englander’s book in March, someone in fact created a website called “kaddish.com” offering mourners the very service described in Englander’s book. The cost: anywhere from $75 to $250, depending on how often the buyer wants the prayer recited.

And Englander is thrilled.

“The concrete joy of dreaming something up and as soon as it goes into the world, seeing someone actualize it, was purely joyous to me,” he told the Jewish Telegraphic Agency in a phone interview Wednesday.

Both Englander’s book and the new website shine a light on a little-known custom in Jewish life: that a key responsibility placed on the immediate relatives of someone who dies can be “outsourced” to a proxy if for some reason the mourners cannot do it for themselves.

In Judaism, children are supposed to recite Kaddish, an Aramaic prayer dating back to the Talmud, thrice daily for 11 months after the death of a parent. Traditionally, only sons were required to do so, but today women, mostly in the non-Orthodox world, also have taken on the mitzvah. Kaddish must be said in a minyan, a prayer quorum of 10 people (only men in Orthodox synagogues), and thus the practice requires mourners to find a service three times a day. Following the 11 months, mourners recite Kaddish only on the anniversary of their loved one’s death and at special holiday memorial services.

Kaddish by proxy is for mourners who are not observant or find it a burden to attend synagogue daily for nearly a year. People without heirs can also order the service for themselves. The service is provided by many local synagogues, where rabbis will often read out names of those being remembered before the congregation recites the prayer. Organizations like Chabad and Hadassah, and a number of websites, offer Kaddish by proxy for a fee or donation.

But kaddish.com is the only one that shares a name with a book by Nathan Englander.

Rabbi Ariel Stone of Congregation Shir Tikvah in Portland, Oregon, and the author of a book about death in Judaism, says that while Kaddish is a central Jewish mourning practice, she has qualms about the proxy practice.

“If it’s all about remembering someone who came before you, who you loved, who died, whose memory you carry, [and] whose power of their life you carry forward in the world,” she said, “then how in the world is that carried forward by someone who didn’t know them reciting words that they would recite equally over anybody else’s memory?”

By contrast, the Lubavitch Youth Organization, which runs SayKaddish.com, says the practice is as much about the dead as it is about the mourner.

“The Kaddish has the power to lift the soul of the departed from one spiritual world to the next, ever higher, every year that it is said,” its website says, drawing on a traditional interpretation that the dead need an advocate — any advocate —  in this world to find their proper place in the next one.

The man behind the website kaddish.com, a 65-year-old Orthodox lawyer from New Jersey, says he bought the domain 22 years ago after his father passed away. Though he did recite Kaddish for the 11 months, the man was curious about the idea of starting a site that would offer the service to others. But life got in the way and he wasn’t able to start the business.

It wasn’t until he read Englander’s book, which he described as “terrific,” that he decided to get started.

“We had the same idea,” the owner said. “He did it in terms of [a] novel and I did it in terms of purchasing the domain name, and I said to myself, ‘This is my motivation to actually create and develop the site and offer precisely the service that Nathan Englander’s fictitious character was seeking.'”

He asked that his name not be published due to privacy reasons, but his identity is publicly available through the site’s registrar, GoDaddy, which lists the owner as Harold Hoffman, with an address in Englewood.

Since launching the site last month, he said, he has received hundreds of requests that are being fulfilled by what he describes as rabbis and scholars in the New York metropolitan area whom he knows personally or by reputation. However, he declined to provide their names or contact information to the Jewish Telegraphic Agency, saying none of them got back to him when he asked them to speak to a reporter.

By contrast, Chabad and Hadassah both indicate where and how the ordered Kaddish will be said. For a fee ranging from $180 to $320, Chabad says it will be recited at Colel Chabad, a charity in Jerusalem. For a donation of $5,000 or more, Hadassah says it will be recited for the first 11 months and every year in perpetuity at the synagogue at its hospital in Ein Kerem, Israel.

Two other sites, mykaddish.com and saykaddish.com, do not offer details but are affiliated with Jewish nonprofits.

Readers of Englander’s book may have reasons to be suspicious of something called kaddish.com: The owner of the site in the novel turns out to be a scammer who is pocketing the money without actually having anyone say Kaddish.

“If I wanted to run a scam, I wouldn’t have stood around for 22 years doing nothing,” the owner of the real-life kaddish.com replied when asked about why people should trust his site.

But the author, who has not spoken to the site owner, assumes the best intentions.

“I send him my good will,” Englander said, “and I assume it is the most upstanding and grand Kaddish site around.”