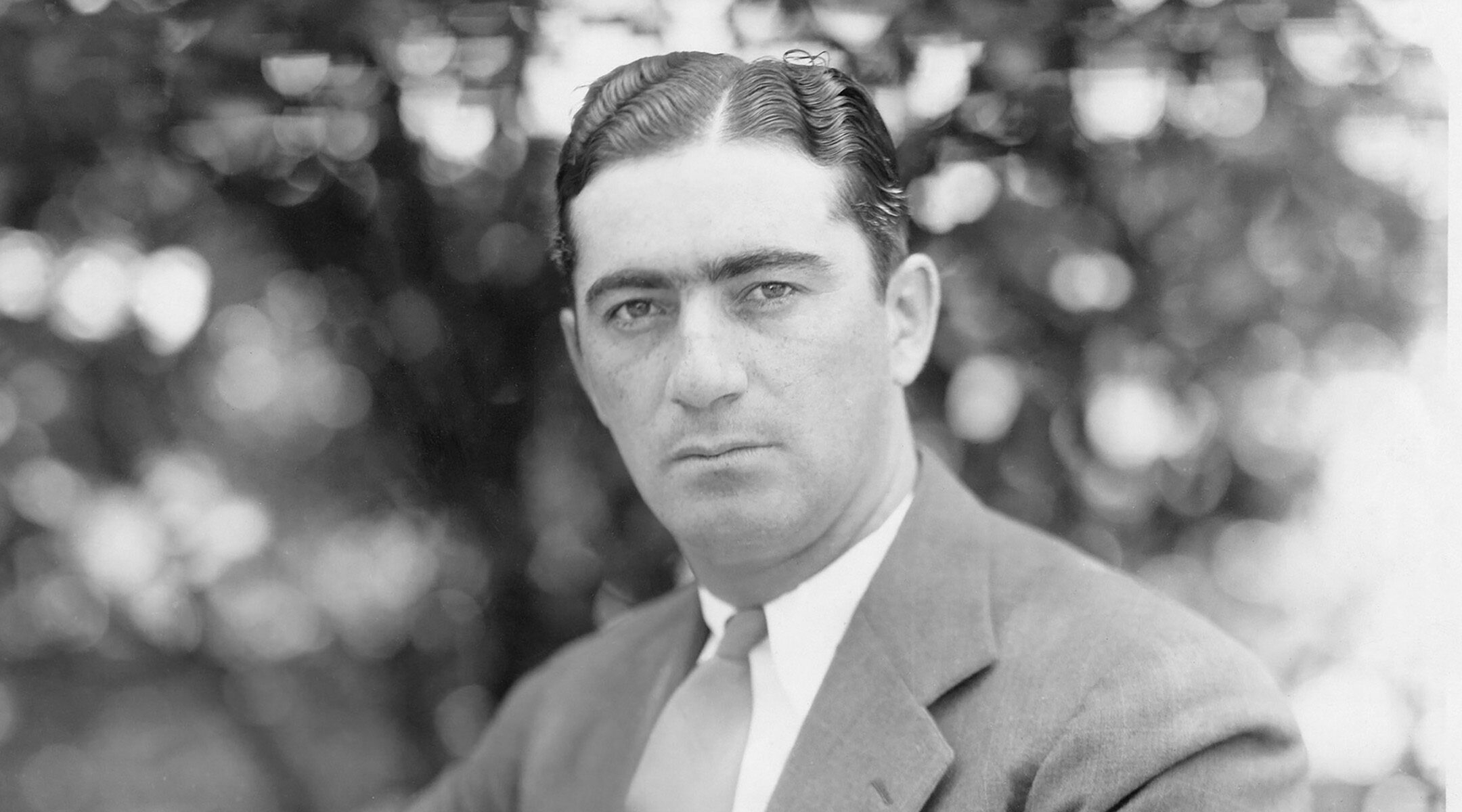 Moe Berg, a ballplayer turned James Bond-like spy, was mysterious and courageous but ask him and he’d put a finger to his lips: Spies and gentlemen don’t talk. Courtesy of Irwin Berg
Advertisement

Moe Berg was “the strangest man ever to play baseball,” recalled Casey Stengel, with his half-century expertise on baseball and the strange. After all, Stengel didn’t know another Jewish journeyman player who spoke a dozen languages, graduated Princeton University and Columbia Law School, was so slow getting to first base that he could be clocked with a sun dial, had absolutely no power (only six triples and six homers in 15 years) and was licensed to kill. Berg was an American spy, a veritable James Bond (and as magnetic to women), working in wartime Europe and Japan, before his remains were flown to Israel in 1972.

This most intriguing of tales is told in an almost impossibly brief 101 minutes in Aviva Kempner’s new documentary, “The Spy Behind Home Plate,” opening May 31 at the Quad Cinema in Greenwich Village.

Berg played seldom, but talked often, telling stories in bullpens across the country. A biography for SABR (the Society for American Baseball Research) quoted John Kieran, a sportswriter for The New York Times: “I never knew a ballplayer who didn’t like him,” as he was able to be a regular guy though he was anything but. The film tells how Kieran recruited Berg for “Information, Please,” a sophisticated Depression-era quiz show, where Berg created a national sensation by answering questions on everything from astronomy to mythology, returning to the show three times. Berg, said Kieran, was “the most scholarly professional athlete I ever knew,” and the most curious. “Baseball suited him perfectly,” said one of his teammates. “He just loved to travel. It didn’t make any difference to him what city.” He’d explore each metropolis in the American League, and then riding the rails “he’d lay in the berth all night reading.”

In 1921, one scout quoted in the film labeled Berg (a shortstop before switching to catcher), “good field, no hit,” an impossibly terse analysis that became a baseball classic, even today, though few know it was first said of Berg. His lifetime batting average was only .243. Players joked, “He speaks a dozen languages but can’t hit in any of them.”

Berg was tall, strong, and “a womanizer,” “very charming and the women went ga-ga for him,” recalled teammates and friends. Babe Ruth’s daughter, Julia (18 at the time), remembered dancing with Berg under the Pacific moon, as Berg and the Babe’s family sailed to Japan with an all-star team in 1934. Said Julia, Berg “came on to me, which rather surprised me, I must say, but he was an interesting person, well educated, and I enjoyed dancing with him.”

Yes, added Red Sox teammate Joseph Cascarella, he was a “womanizer, but he did it with great taste and elegance.” With his mastery of languages and foreign culture, when Berg played for the Washington Senators he’d be invited to embassy parties, and go to the “countries” that interested him. Aside from that, writer Larry Merchant added, “he’d go to embassy parties to look for women. Hey, why not?”

To hear people — men and women — tell, Berg was likely the most mysterious, intellectual, bravest, sexiest and, in the end, perhaps the loneliest man of his time. Ask him about his secrets, and he’d just smile, put his index finger to his lips, and go “Shhh!” Spies and gentlemen don’t talk.

Considering that Berg’s been gone since 1972, and hasn’t played ball in the majors for more than 70 years, it’s to Kempner’s credit how many of his old teammates and contemporary voices she found to testify to Berg’s life and times. (She also obtained interviews given for a 1980s documentary that was never completed.) Among the all-star “talking heads” are Berg’s Red Sox roommate Dom DiMaggio; White Sox owner Jerry Reinsdorf; former commissioner Bud Selig; Angels manager (and former manager of Team Israel) Brad Ausmus; Berg biographer Nicholas Davidoff; the sons of Walter Johnson and sportswriter Shirley Povich; writer Franklin Foer; Washington Post columnist David Ignatius; film historian Annette Insdorf; baseball historian John Thorn; sportswriters Ira Berkow and Larry Merchant; and some of Berg’s fellow spies. Kempner even found the son of Estella Huni, a pianist who seems to have been the love of Berg’s life, though they never married, a love dissolved by the distances imposed by baseball and wartime. Nevertheless “it was obvious,” said Estella’s son, that “they had a very passionate relationship.”

Berg was born in Harlem, 1902, to Jewish immigrants thoroughly ill at ease with their Judaism and with baseball. Berg’s father never went to see him play, not in college, not at Ebbets Field. At Princeton, where he starred in baseball, one of the prestigious Princeton dining clubs decided to relax its anti-Semitic rules, inviting Berg to join on the condition that he not invite any other Jew. Berg turned them down; his Jewish dignity demanded it. The Princeton yearbook noted under his photo: “He is a Hebrew.”

He’d read any newspaper he could get his hands on, in any language. Over the years, he mastered Spanish, Japanese, Latin, Greek, German, Russian, French, as well as English, Hebrew, and Yiddish. Oh, he also spoke Sanskrit. In Tokyo, he signed autographs, “Moe Berg” in Japanese.

Good field? Great field; in 1928, he threw out 61 percent of base stealers (neither Yogi Berra nor Johnny Bench ever reached that percentage).

His life as a spy seems to have started on a 1934 trip to Japan. Why else would Berg even be on that trip with Ruth, Lou Gehrig, Jimmie Foxx, and other future Hall of Famers? Japan was already at war with China. Berg carried a letter of introduction from Secretary of State Cordell Hull. Most players had tourist cameras, but Berg had a state of the art Bell & Howell to take movies. One day, Berg visited the maternity ward in the Tokyo hospital — the tallest building in Tokyo. Wearing a kimono and Japanese slippers, parting his hair in the middle, Berg bought flowers, and went to visit the patient — except he didn’t. Once allowed in the hospital, he went straight to the roof, threw away the flowers, and took out the 16 millimeter Bell & Howell from under his kimono, and filmed a panorama of Tokyo: the harbor, the industrial district, the commercial district. Berg’s rooftop film was studied by American pilots before flying on Gen. Jimmy Doolittle’s legendary bombing raid over Tokyo in 1942.

In 1944, the Office of Strategic Services, the wartime intelligence agency, sent Berg, with his knowledge of German and physics, to attend a lecture in Zurich by Werner Heisenberg, the brains behind the Nazi’s atomic bomb development program. Berg slipped past the SS guards, carrying a pistol and a cyanide pill. If Berg thought that Heisenberg knew enough to soon get the bomb, Berg was to kill him on the spot—and swallow the cyanide. Berg, sitting in the front row, heard nothing of certainty from Heisenberg; he complimented the physicist on his speech and managed to charm Heisenberg to a walk back to his hotel, socializing in German, trying to extract more information. Berg saved his bullets for other things.

President Roosevelt sent an encoded message of appreciation for Berg’s bravery: “Give my highest regards to the catcher.”

The film’s singular frustration is that it ends in 1945, though Berg died in 1972. (His last words: “How did the Mets do today?”) Although he was a Princeton graduate, a lawyer, and was a coach with the Red Sox before the war, he spent his final quarter-century adrift. He sat alone at ballgames. He never held a job or had a girlfriend that anyone knew of (though he was friends with Anita Loos, who wrote “Gentlemen Prefer Blondes”). He lived with his brother, and then his sister. He was offered an advance to write his autobiography but then the publisher dropped the offer after discovering he was Moe Berg, not Moe Howard of the Three Stooges.

We called Kempner, 72, director of award-winning documentaries“The Life and Times of Hank Greenberg” and “Partisans of Vilna,” and she explained, after the war “everything was anti-climactic. There was talk he did some secret missions for [Israeli Prime Minister] Golda Meir; I could not find evidence of it. There was talk he parachuted into Yugoslavia and fought [on behalf of] Tito. We couldn’t find evidence. No one could even track down if his ashes were actually taken to Israel. Even his birth certificate proved wrong. From birth to death, so much of Moe was a mystery. I didn’t want to say anything in the film that we weren’t sure about.”